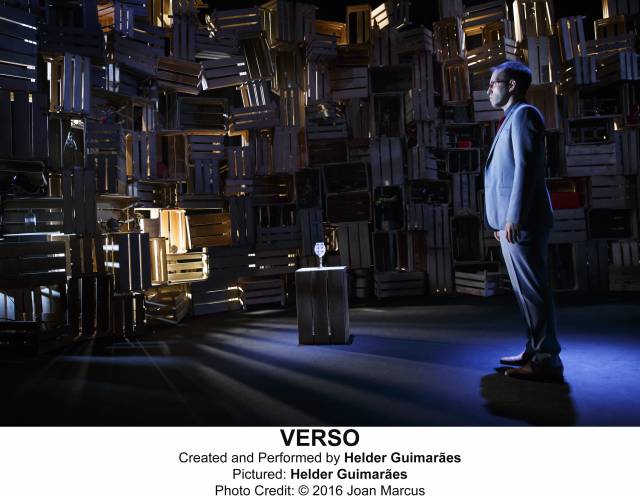 Magician Helder Guimarães is the youngest winner of the prestigious World Championship of Closeup Card Magic. He was awarded this trophy in Stockholm in 2006 by performing a routine so impossible that magicians are still talking about it. He went on to co-create and perform the successful show Nothing To Hide with Derek DelGaudio in 2013. That show had a long and successful run in Los Angeles and New York. Now, with Verso, the talented conjuror returns, this time flying solo.

Verso means both opposite side and verse depending on the language, but is never defined or even referred to in the show itself. Guimarães, dressed in a fashionable light blue suit and sporting red-framed spectacles, performs on a small stage surrounded by walls of wooden crates that hold various interesting-looking objects, some of which he uses in the show, others he leaves alone

The tricks are utterly baffling. At one point Guimarães names cards selected from a deck he tosses into the audience and never again touches. Later he somehow divines the numeric code to unlock an audience member’s phone. It’s all bewildering as hell, and if that is the kind of magic you like, by all means go. You will be stunned, no doubt about it.

But there isn’t much to this show beyond being fooled. There is barely a touch of atmosphere, hardly any romance or wonderment. For conjuring to be its most effective it should have a sense of poetry, a raison d’etre. Verso has bafflement aplenty, but not much in the way of lyricism or emotional weight. Guimarães speaks a great deal about human behavior in several rather uninteresting monologues, “We all make choices…” he announces at one point. Later, “We all lie…” then still later, “We all seek control…” etc. During these speeches he seems to present his performance as a study of human behavior. However, none of this is particularly illuminating. We all “make choices”, yes. But as a former lady friend used to say to me, “Your point?”

As a performer Guimarães is at his best when he leaves the wordy script behind and interacts with audience members. He truly comes alive during these moments, with improvisation and flashes of wit and charm. He handles the unexpected with skill; audience members who talk or behave rudely are dealt with harshly but humorously. Guimarães really seems to enjoy being onstage and entertaining people.

The show’s menu of magical effects is devoted to card tricks and mentalism. It’s all very well done if a little repetitious. One of the standout bits is a remarkable routine in which Guimarães keeps shuffling a deck and one by one, selects each card in a suit, in order. And he does this blindfolded. Baffling stuff to be sure.

18th-century conjuror Jean Eugene Robert-Houdin, the so-called father of modern stage magic (from whom Houdini took his name) said that a magician is an actor playing the part of a magician. This is true of the best magicians, who create clearly crafted magical personas; Copperfield is the sensitive sorcerer, Ricky Jay is the fascinating, yarn-spinning card sharp, Penn & Teller are the mischievous debunkers of illusions (often their own). In Verso it is unclear what sort of magician Guimarães is playing. Is he portraying a man with scary secret powers like David Blaine, an impish trickster like Teller or a skilled card sharp like Ricky Jay? He sort of shifts around all of these, which means he isn’t really any of them.

There was obviously an attempt to make Verso a theatrical experience, but it doesn’t appear that a lot of thought or effort went into that aspect of the show. Let there be no mistake, there are many truly remarkable effects performed in Verso, tricks I have never seen before in a lifetime of enjoying fine conjuring. Magic fans should definitely check out this talented performer; he didn’t win that trophy for nothing. But the show’s concept, script and staging do nothing to elevate Guimarães’ performance above that of an evening of bafflement.