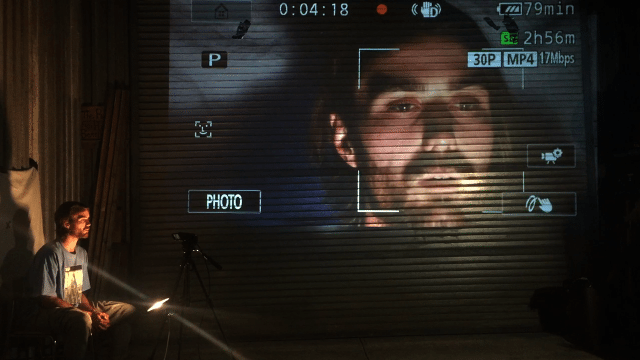 What is the real essence of Sophocles’ Theban plays and why do we still perform it today? Asa Horvitz’s Theban Plays, neither a retelling nor an adaptation of the original trilogy, nevertheless extracts from each story its core philosophical questions.

Oedipus (Ryan Pater), Jocasta (Eliza McKelway), and Antigone (Deidrea Hamid) each bring us into their twenty-first century worlds through media: Oedipus, known to us as “Ed”, brings us into his thoughts through a live feed; Jocasta manifests her world through the “Colonus” installation, which includes Hilma af Klint’s painting “Svanen”. Closer to the source material is Antigone’s monologue and engagement with the earth in honor of Polyneices.

By leaving the house lights on and breaking the fourth wall, Horvitz sets the tone for a more direct engagement with the audience. The play switches back and forth between media and more traditional storytelling, an effect that sometimes felt disjointed. The sound design (also by Horvitz) possesses its own life, giving shape and form to the audience’s emotional journey; the music composed and performed for the “Colonus” installation (Adrian Knight and David Lackner) worked hand-in-hand with the live art created by the cast members.

If the goal was to create “performances that are complete, autonomous, living worlds”, then Horvitz succeeded. Oedipus, Jocasta, and Antigone were each immersed in their own world, unaware of the one existing “before” and “after”. They all existed within the same time flow, exploring their own existence and questioning their place in society.