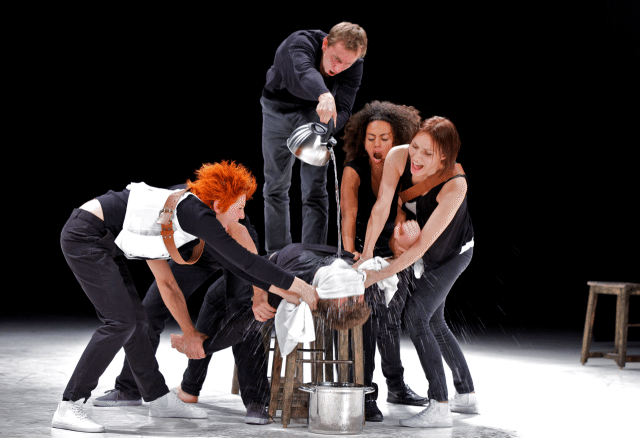 Those looking for something raw, unique, and devastating in a theater experience will find it in Trash Cuisine. The production from the Belarus Free Theatre is an unnerving depiction of the torture and execution of political prisoners, past and present, innocent and guilty. Written by Nicolai Khalezin (also the director) and Natalia Kaliada, the play is a series of exceptionally well-choreographed and interwoven scenes that combine dance-like sequences with reenactments of violence, fragments from Shakespeare, audio and visual projections of historical events documenting instances of executions, and a food presentation -- all happening simultaneously.  At first there is confusion: why are we watching a pseudo talk show on preparing fancy cuisines when the performers are being tortured on stage?

Trash Cuisine is uncomfortable to watch; even if you look away for a moment, your other senses will be activated as the aroma of cooked meat fills the theater and the sound of a taiko drum echoes in your ear.  And the piece deserves those unsettling feelings and the literal sickness you may experience. Through a number of different devices, physical expressions and artistic interpretations, we are made to experience an electrocution, a hanging, even a waterboarding - which in full disclosure isn't a mere reenactment, it is happening on stage. The performers are literally thrown around on stage, hit, punched, emotionally abused and stripped bare in front of us. When we see their naked bodies, they are bruised, and we can see their skin reflect the palpable fear that we all endure throughout the performance. No performer is spared from being tortured or being the torturer. 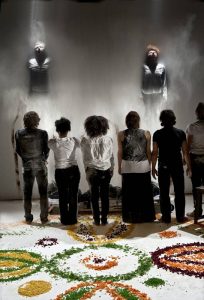 The Belarus Free Theatre is the only Belarus theater that openly criticizes the injustice in their country and represents similar atrocities happening in every corner of the globe. Founded in 2005, the company has performed their works internationally, and despite being banned in Belarus, they perform in secret locations with both performers and audiences risking arrest. For the provocative works that portrays the blatant violation of human rights, performers have been arrested and persecuted by the Belarusian authorities for their involvement with the company. This has included two of the current international members of the company, Stephanie Pan (USA) and Esther Mugambi (Australia).

The company has performed at La MaMa in 2010 and again in 2011 and considering the controversy there is around their work, it is a testament to both the theater and the company’s advocates that work like Trash Cuisine is given a space to be experienced.

“I think it is beautiful, what he did. I think he is brave.” That was Maria Alyokhina’s response during the interview section of the new performance piece by Belarus Free Theatre’s Burning Doors. It was a question posed to her by an audience member regarding Colin Kaepernick’s kneeling during the national anthem and the broiling national debate created in the aftermath. The audience, on the night I attended the performance, burst into spontaneous applause — another amazing moment in a series of amazing moments in the moving, brilliant, sometimes terrifying, sometimes devastating new work at La MaMa. Yes, I too believe that Kaepernick was brave for what he did, but compared to what? Maria Alyokhina herself was incarcerated in Russia for two years for performing with her band Pussy Riot in a church in Moscow. Two years. It’s inconceivable, to us. So, I must ask you, dear reader, how do I get you to buy a ticket to Burning Doors? The very fact that you can read these words means that you don’t suffer very much. You are concerned, of course, we all are so very concerned. But are we brave? No. Belarus Free Theatre Company is brave, Alyokhina is brave, Oleg Sentsov (currently incarcerat …Read more

Inna Tsyrlin is an emerging playwright and frequents all forms and styles of theater as much as humanly possible. She is determined to represent productions with insight and empathy for all involved with the theater, those who are both daring and driven to put work out into the world.