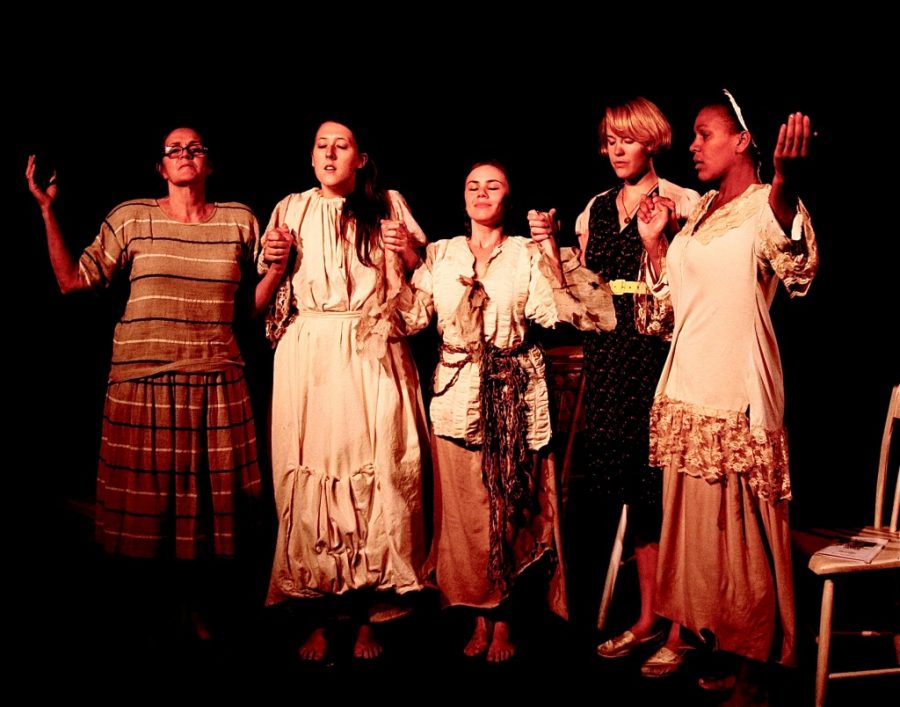 When the stories of extremely unsympathetic characters are covered extensively in the media, many of the complexities of their psychologies go unseen. “Slain in the Spirit” is an exploration of the underpinnings of such a mind, based on the harrowing incident in which Andrea Yates drowned her five children in 2001.  Writer and director Liza Milinazzo’s takes on the daunting task of examining the vulnerabilities that drive people to fundamentalism and inexplicable acts.

Emily Meier makes a convincing progression into madness as Molly, the mother suffering from postpartum psychosis, made more compelling by occasional bouts of normalcy, until finally the story reaches its dreadful conclusion. A search on the real-life filicide reveals photos of an expressionless, inscrutable woman, but Molly shows a range of emotions that aren’t apparent during televised courtroom trials—peppy bordering on annoying, nearly catatonic, and completely enraged. We see Molly struggling to glean meaning from the Bible and apply it to her modern life and to cope with her violent thoughts on her own. “Angel/Demon” spirits onstage throughout the play underscore her chaotic mental state further.  Akin to a Greek chorus, the creatures effectively reflect Molly’s inner stage and create the most tension in the drama.

While this is an exceptional and horrifying story, it has a more relatable theme at its base. “Slain in the Spirit” is about good intentions gone awry. Molly and her husband Dan just want to be “good people,” a big wholesome Southern family. Josh Alscher undergoes a drastic transformation too as he plays Molly’s insecure husband, at first caring and well-intentioned, and then harried and cruel (though arguably still well-intentioned). They question themselves at every step, and the fanatical traveling preacher Pastor Llyod enters the couple’s life easily. Based on a real-life equivalent as well, the maniacal fundamentalist provides some comic relief for us, but wields a scary influence over the couple.

The story starts sweetly, misleadingly, with trite sentimental dialogue.  Molly is all giggles and platitudes (“you smell like a man”), with maybe only a hint of the mad about her, ultimately making the climax of the play shocking, though expected.

Her children are represented by sacks, but the play is not about her interactions with them. It is all about her and the decay of her inner state. Milinazzo challenges the audience to consider her life story and its intricacies, and, most-disturbingly, any similarities that inspire understanding.

Nina Lukina is a writer, theater lover, and management consultant from Brooklyn.