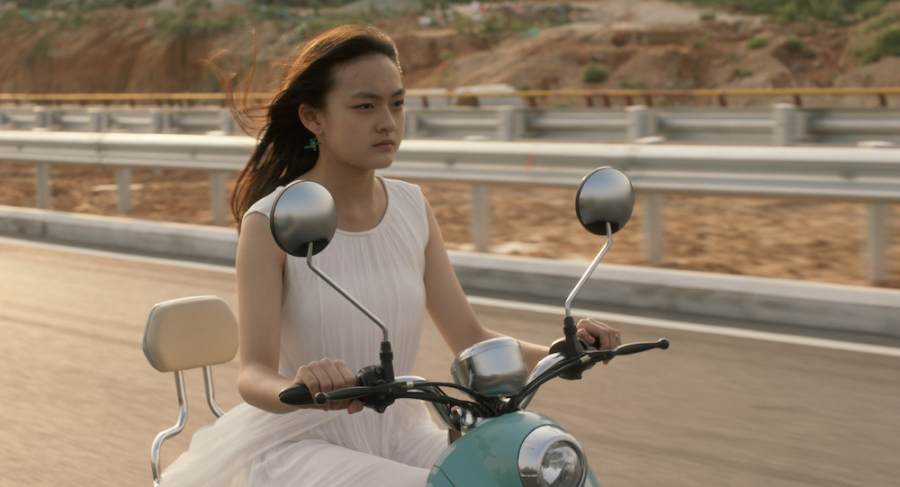 In Angels Only Wear White, a teenage girl walks under a statue of Marilyn Monroe in her iconic pose, bare legs, uplifted white dress.  Tourists bunch up around her legs, eager to have their photos taken, crowding these girls out. By the film's unhappy conclusion, cinema's high symbol of female sexuality is stickered and plastered with debris, and disassembled by a group of men, construction workers, who do so mechanically and with little fanfare under the quiet gaze of moonlight. Angels, it seems, are dispensable. More than amusing visual fodder, the spectacle proves a grave and tidy summation of this quietly wrenching film, which at its center boldly observes the mistreatment and more of women by the government, men, and society in a small seaside town in China.

Teenage Mia (Wen Qi) works the front desk at a small motel popular during vacation season. It might be best described as an aspirant--not quite a dive, but on its way to something better, much like its employees who are working toward a better life. Lacking proper legal ID, Mia's job situation becomes precarious when one night she witnesses on the security camera clues hinting toward the sexual assault of two young schoolgirls, still children, barely beyond the edges of dress-up and make believe. What Mia sees is perhaps less categorical, and more circumstantial evidence; beers sent up to the young girls' room, raucous music, a struggle and the closing of a door. Out of ordinary, the events are sketchy enough to compel her to record the footage on her cellphone. Scenes of the actual assault are omitted, but the heft of their consequences remain. The film seamlessly weaves Mia's story with the two victims, in particular Wen (Zhou Meijun in a bravado performance). The adults--parents, teachers, authorities--are less concerned with the girls' well-beings or justice for the crime, than with their futures and societal value. Appearances are of utmost importance; the fact that the girls are sullied, not sullen. The film alludes to the society's preoccupation with purity and virginity, an ideal that plagues Mia and her coworker, too. The only advocate is a competent and well-meaning female lawyer. But, good intentions and skill can only get so far as conspiracies infiltrate the lower levels of government and media.

Angels Wear White unravels with the vague trappings of a crime thriller or mystery, but it is more than a detective story inflected with social justice themes. That would deny the director Vivian Qu her power as a filmmaker of originality and clear vision. She favors silence and long takes suffused with natural light, but not the harsh spotlight of interrogation, rather an effusion of clear disinfecting white. She also manages to expertly strike an effective balance that is objective without feeling clinical. Deeply and appropriately disquieting, the movie takes care not to exploit the fact of violence, or anesthetize it. Like its female characters, silenced, but never forgotten, this is a film that lingers.