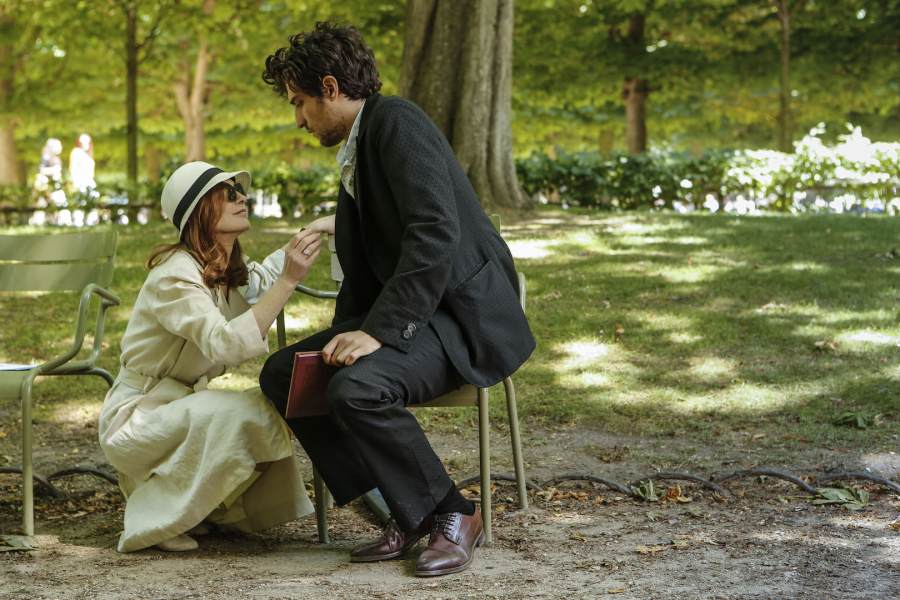 Though it premiered at Locarno, Luc Bondy’s final feature False Confessions appears to have been billed as TV movie and been broadcast on television in Europe, as opposed or prior to a theatrical release. A French television movie seems like an oxymoron or an unfathomable object to be scoffed at or spurned. Leave it to the French to infuse a work for the masses with a sense of highbrow culture, namely an adaptation of Marivaux's play (Les Fausses Confidences). Not only that, but Bondy's version was filmed by day while the very same cast performed the play by night under his direction at the Odeon Theater in Paris. The central plot finds the upstanding Dorante, of good name but no fortune, finagling himself into the graces of older Araminte, widowed and wealthy, by working as her secretary at the recommendation of his uncle Remy (Bernard Verly) who is also under her employ. Louis Garrel plays the virtuous and handsome Dorante, whose disconsolate smittenness disseminates at times into a rather unreadable state of nonchalance.

But, this is a group effort, with the object of his affection, Araminte, played by none other than the queen herself, Isabelle Huppert, breezing through with effervescent delight as the beguiled, a funny change of pace. (It’s always difficult to believe Huppert, and typically the characters she plays, could be victim to such romantic shenanigans). Bulle Ogier swoops in as her mother, a formidable woman who along with the servant girl Marton (Manon Combes) pushes for Araminte to marry the older Count to better settle business and financial matters outside of court. Combes gives the best performance; while the stars seem present and passable, Combes edges them out with a sparkle.

One merry scheme uncovers another deception, propelled by Dubois (Yves Jaques), the valet,  but all in the name of love. Romanticism and accompanying theme of deception, though, fall to the wayside of humor here. Mostly, False Confessions has an off-the-cuff feel, that opposes the solemnity of a theatrical staging, but feels too neat to be billed as an improvised, filmic ingenuity. The camerawork is serviceable and rudimentary, with a few scenes of fanciful fabrications and daydreams set to black and white, but overall this rendition loses something perhaps in substance and style; the beauty and weight of Marivaux's language obviously to the non French-speaker, but also any meta-reflexive commentary that might be gleaned from the film's setting, in the wings and corridors, and balconies of the Odeon itself, and the production.

Indeed, those unfamiliar might be less enthralled generally and find it peculiar, though without detriment, specifically that these characters occupy a large venue. There are however anachronisms that make for slight sight gags; pairs of fancy shoes adorning the theater steps, and Araminte's penchant for working out. The film's best takeaway might be Huppert tai chi-ing in a silky robe, and later, wringing her hands in a gold lame tracksuit.

Conversation: Is ‘Happy End’ Haneke Go...
A Review of ‘The Guardians’
Review: Angels Only Wear White
A Review of ‘Filmworker’