May 17, 2018
Film
France
Nathalie Baye
Xavier Beauvois
When a Visual Story is More Rewarding Than Its Synopsis
A Review of ‘The Guardians’ 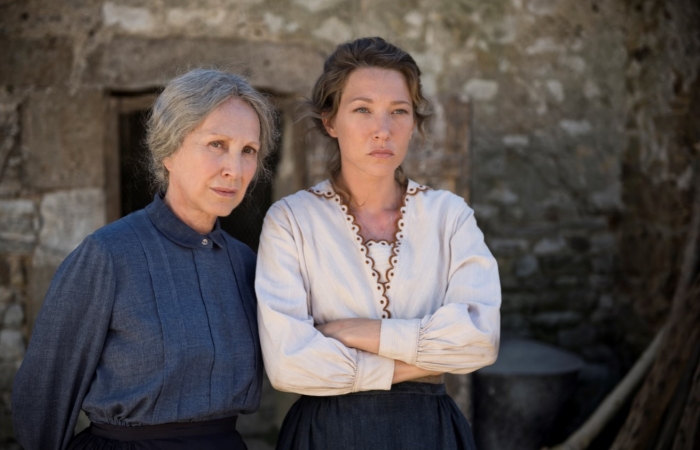 Although it was obviously a cataclysmic tragedy, World War II has had many a kitschy film treatment (e.g. Indiana Jones, Inglourious Basterds) among the melodramas and earnest soldier stories.  Meanwhile, without the histrionic evil of the Axis, World War I lacks the variety of approaches that the Second World War gets, and its visualization has become firmly entrenched in the, well, trenches.  The Guardians, or in the original French, the feminine Les Guardiennes, is certainly a sober, meditative movie about the Great War, but it does manage to avoid wallowing in its cliched signifiers: trenches, pointy helmets, mustard gas. Instead, it favors a palette and style that deliberately invokes French Realism, a school of painting that focused mostly on farming and dominated the second half of the 19th century.

The plot follows an upper-class farm family, led by matriarch Hortense Sandrail (Nathalie Baye) who hires a young woman, Francine (Iris Bry), to be a farm hand---all of the men being on the front. This includes Hortense’s sons, Georges (Cyril Descours) and Constant (Nicolas Giraud), who periodically come to the farm on short leaves. The cast is filled out by a nearly non-verbal patriarch (Gilbert Bonneau), the winsome daughter of the house, Solange (Laura Smet), and her daughter-in-law, Marguerite (Mathilde Viseux-Ely). Barring one flashback to the front, the action is set entirely on the farm, and rendered exclusively in the images of Jules Breton and Jean-François Millet. Gleaning, sowing, dusky harvests. The bonny lass, Francine, is almost identical to Breton’s 1894 painting, Glaneuse.

Francine is the sort of ruddy beauty whose folksy singing is sure to catch an eye, and catch one she does, of the younger son of the family, Georges. Marguerite, who is not a blood relative but part of the family (the ideal 19th century match!), is his implicit intended, adding some drama to the movie about an hour in. There is also a passel American G.I.’s who come by, providing the plot with some square-jawed deus ex machina. But The Guardians is in no rush. It is a quiet movie, invested in conveying the rhythm, boredom, and constant dull dread of the women who waited behind and kept the home.

As it trickles into its third hour, you can’t help but wonder where it’s going and how it will get sewn up, but its visual story is much more rewarding than its synopsis. French Realism tends to be discarded in favor of the fiery post-Impressionists in art histories interested in providing a clear narrative towards the emergence of abstraction. But if nothing else The Guardians suggests the visual world of the realists wasn’t entirely lost: it is the natural language of film. It unexpectedly carves a new path for historical films: neither cartoonish nor propagandistic nor cliched. Instead of conveying nostalgia with its style, it subtly suggests that those things we think we’ve irreversibly left behind are always folded somehow unexpectedly in the future.

Review: ‘Gemini’ Is a Grab-Bag of Dram...
Interview: The Star, and Director, of WWII Drama &...
Review: The Most Surprising Element in ‘Isle...
Review of ‘Gringo’ starring Charlize Theron &...