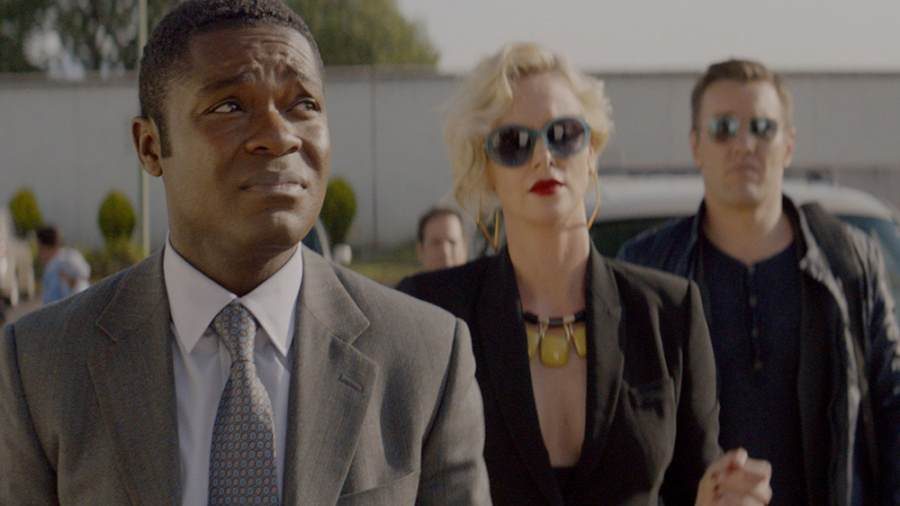 Have movies about the hapless everyman, buffeted between the aggressive hypocrisy of suburbia and the depredations of corporate greed, become outdated? Not so long ago, this ethic existed in just about every flavor: arty, stage-actoring American Beauty, burnout deadpanning Office Space, cynical and political The Informant!, and outright brilliant Burn After Reading. This would all suggest there was a time, as recently as a decade ago, where the foremost concern was getting kicked around by the man in some washed-out, Midwestern metropolis. The question is whether this premise, a trope that spans genres and thrived for years, is still meaningful today.

Gringo is about the sort of sap that could often be found slinking across the landscape described above, played charmingly here by David Oyelowo. His character, Harold Soyinka, suffers between a spendthrift, ballbusting wife (Thandie Newton) and a jackass friend-turned-boss, Richard Rusk (Joel Edgerton). Soyinka—mired in overdrawn bank accounts and ominous rumblings of a coming merger—suffers a new indignity when Rusk and another executive, played by Charlize Theron, decide to accompany him on a routine trip to Mexico to check on “missing product”—something he’d always handled on his own. On ascertaining that he is both personally scorned and professionally disposable to the two during a boozy, hotel dinner, Soyinka decides to take revenge on his corporate torturers.

Complicating the plot is the company’s entanglement with a drug cartel, an American couple that have come down to make a small drug deal, two enterprising hoteliers who see some money to be made, and a bounty hunter-turned-humanitarian. It’s not worth summarizing more of the plot than that, complicated and ever-changing as it is. This is not to say it’s badly plotted. It’s actually an impressive series of shifting standoffs, premised on bluffs and misunderstandings. What fails to land is the scope and premise of its satire. Gringo deals with symbols that belong to a simpler time: the corporate sap, the doltish executive assholes, the frigid and traitorous wife, the Mexican drug lord caricaturized well outside of any historical or political specificity. These add up to a series of bad guys doing bad things, but they also exist in an ethos where bad things are punishable and balance can be restored in living one’s best life.

Somewhere along the line, this underdog story lost its currency. Today, cineplexes fill up for stories of fervent solidarity and un-cynical adulation of the next generation (The Last Jedi, Black Panther). The underdog story is a necessarily individual narrative that can only result in personal victory. It makes a big stink about one hectoring corporate prick, but who can take that seriously when the country now runs on pure id of the archetypical asshole boss? Gringo is a movie that is meant to entertain and satisfy, but it scratches an itch that has passed. And being reminded of the phantom world that this would have spoken to, not so long ago, takes the sunshine out of whatever rip-roaring enjoyment the movie set out to provide.

Review: Logan Lucky
Review: Detroit
A Review of ‘Filmworker’
The Shots That Won These Classic Films Their Best ...