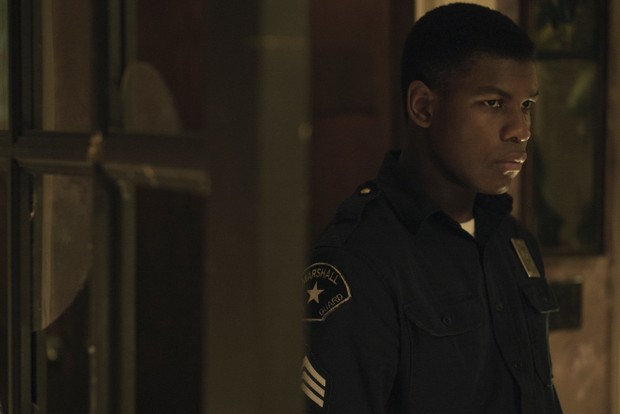 I don’t like walking away from movies and thinking, “Well at least it wasn’t pro-torture.” But this is a valid concern in Kathryn Bigelow’s follow-up to 2013’s blockbuster Zero Dark Thirty—a movie on the hunt for Bin Laden that sloppily suggested that torture helped find him, a detail that has no material evidence. Detroit is at least less ambivalent in its exploration of violence. It is a historical take on the 1968 racial uprising of said city, centering around one particular episode in the annex of the Algiers Motel, where police terrorized suspects in search of a sniper for one long, torturous night. So this movie features a lot of torture again, but while this time Bigelow seems condemnatory, I’m not sure she has anything else to say.

The movie starts on a grand scale, describing the great migration of former slaves from the South to industrializing northern cities. As we settle into 60’s era Detroit, the movie continues to coast along without characters. It slowly coalesces around a handful, but in an unhurried, unconnected manner. For a moment, I thought it was named Detroit not just to give ambiguous weightiness, but to nod to Altman’s Nashville.

I was completely wrong. What might have been mistaken at first for an attempt to scale up her work, reveals itself to just be awkward, lumbering steps to bring the story together and marshal the characters into the Algiers Motel. The effect is that once the scene is set and the movie has started in earnest, half the characters have backstories, half do not; the racist cops are given an introduction, but the basically decent ones are a wash; the drama is contained and excruciating, but void of larger resonance. The scale of the city, promised in the title and introduction, has been completely lost

So what does she accomplish in dramatizing this long, devastating night of cruelty? Bigelow acts as though her movies are somehow warranted by the timeliness of the topics. That filming them is inevitable, and their historical basis makes them valid. She likes to cite research and facts, like the movie itself doesn’t exist; her art is just a perfect mirror to society. But of course, the movie itself says something, even if she thinks sourcing her facts absolves her of ideology.

So I close by noting that at one point, as the ringleader of the cops (William Poulter) torments his captives, he demands they pray, glorying in his power and their terror. Bigelow closes the movie with a character singing a spiritual. I don’t think these were supposed to be related, but it’s always good to see the intersection between that which is unquestionably wrong and that which we all seem to accept. Bigelow ends a movie about police brutality, systemic racism, and a useless justice system with, “... I don’t know, pray?” Not a word about the riots, not a word about resistance. I guess these are just the facts, but I don’t go to movies for that.