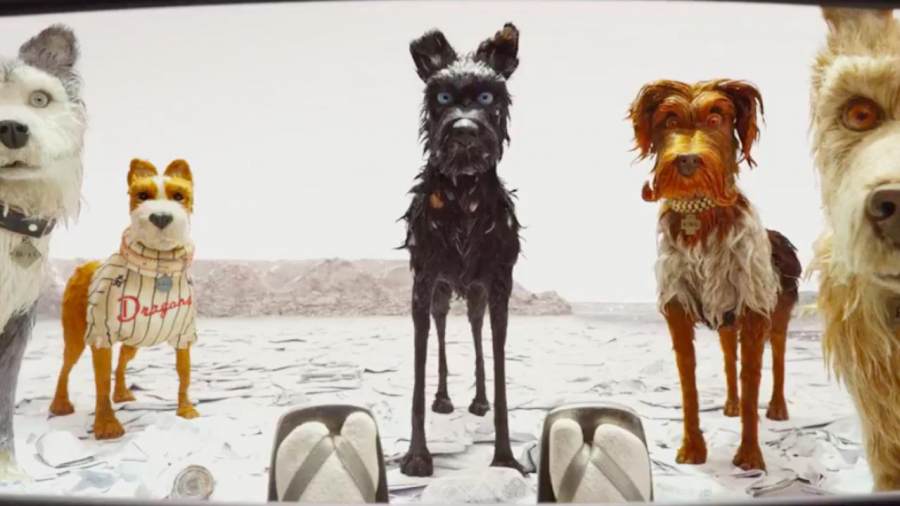 Isle of Dogs, Wes Anderson’s ninth feature and second animated outing, gives us an embarrassment of visual riches. While his previous film, The Grand Budapest Hotel, seemed to represent an apex of the distinct Wes Anderson style, in Isle of Dogs, we see it crescendo to an almost unmanageable velocity. One can only imagine how much labor went into every shot in this overstuffed universe, set in the fictional Megasaki City, Japan. Anderson has taken to panning his camera at a speed that allows the viewer to appreciate roughly a third of his craft. Meanwhile his dialogue, which was once a labored series of non sequiturs that ripen into jokes the longer you turn them over in your head, has evolved into a rapid banter stocked with belly laughs in the theater.

The story is simple: dogs have a contentious history in cat-loving Japan, and Mayor Kobayashi (Kunichi Nomura) has finally gone and banned them. They are being exiled to one Trash Island in a policy built on both a historical antipathy and the exploitation of a potential health scare. It riles up crowds and inspires a small resistance group of ‘pro-dog’ fighters, who are mostly high schoolers. Sound familiar? The main plot centers around Kobayashi’s ward, Atari (Koyu Rankin), who pilots a plane to the island in order to find his beloved guard dog (whom he secretly loves as a pet) Spots (Liev Schreiber). He is greeted by a flea-bitten pack voiced by Bill Murray, Edward Norton, Bob Balaban, Jeff Goldblum, and Bryan Cranston.

Anderson is the sort of director whose love of movies for the sake of movies has always endeared him to me even more than his self-evident directorial genius. It is that sensibility that studs the movie with, not clichés, but movie tropes: Bryan Cranston plays a rugged, self-proclaimed stray who resists the call of the master; they are on a quest across an island to an oracle; and an evident boy-and-his-dog love story is brewing. This is leavened with some delightfully discordant elements: the kid, who has a piece of shrapnel lodged in his head, seems a little unhinged; the obsessively democratic band of dogs, who even take votes on whether or not they should leap out of the way of certain destruction, are mostly ineffectual; and the oracle...I’ll leave that one for you to discover.

But the most surprising thing about Isle of Dogs is how timely it is. Anderson has always seemed like an artist who exists in his own world, but the incipient threat of demagogues and class hatred seems to have infected even his delightful universe. So here we have Anderson taking on a rotten subject, offering it his distinctive gloss and a pat ending. This left me, for the first time, unsettled by Anderson’s work. I was not so much disappointed with the movie’s take, but fearful that the space between his world and ours is starting to grow too large. But I’d give anything to stay in his.

Review: Okja
Review: Letters from Baghdad
A Review of ‘The Guardians’
Review: ‘Gemini’ Is a Grab-Bag of Dram...