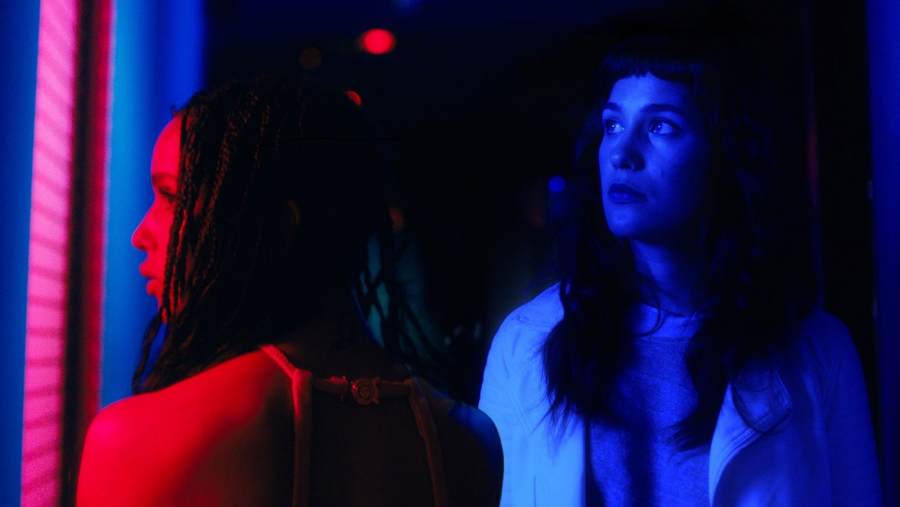 The human double has long been in use by movies about making movies, from David Lynch’s ‘trilogy’ of Lost Highway, Mulholland Drive and Inland Empire, to Bergman’s Persona, and Charlie Kaufman’s Adaptation. Within this category, movie-movies that are set in LA are their own micro-genre, and the doppelganger only gains more resonance in this specific locale. After all, it is a trope that neatly conveys the most trenchant theme of LA, a city of doubles: the real world versus the fantasy, the projection on screen versus the perversity on the streets. Gemini is Aaron Katz’s entry into this ripe universe. In it, Lola Kirke (Mistress America, Mozart in the Jungle) plays Jill, the mildly harried, but fundamentally chill, assistant to Zoë Kravitz’s Heather Anderson. (Why are movies about movies always so bad at coming up with fake celebrity names?) It opens with Heather behaving in a casually selfish and destructive way. Death threats are spewed out early on, and the audience is unsure how to read them before realizing it is simply the rambunctious patois of showbiz.

But the mood darkens as it becomes progressively more clear that Heather Anderson has something to fear in her borrowed mansion, and her cloying need to be coddled by her assistant seems to be taking on a pathological tinge. When a corpse appears in Act I, the movie really gets going. Our heroine is suddenly on the lam, which translates into Lola Kirke changing just her hair color while preserving her distinctive modified-bowl-cut bangs, and literally wearing a trench coat, sunglasses, and a bucket hat. “Can I help you?” a friend asks, momentarily unable to recognize her. It’s incredible. She proceeds to use her smartphone for the entire movie, while dodging the cops by literally, physically dodging them.

The dopiness of the practical plot elements aside, the movie is clearly trying to avail itself to a newly developing fad in cinematography. It is characterized by saturated complementary shades of fuchsia, neon green, and inky blue. Think Neon Demon or Moonlight. One of the particular combinations of this palette—blue and magenta together—is gaining currency under the moniker “bisexual lighting”. This is apt for the plot of Gemini, but it is upsettingly under-explored in a movie that gingerly uses queerness as a plot device. In fact, the plot might be described as a grab-bag of devices: a murder, a body, suspects, pithy meta commentary, a falsely accused hero, sexual intrigue, and a twist. The ambient mystery that is so critical to the genre is mostly being sustained by two questions: do women sometimes have sex with each other (they do), and are starlets basically selfish assholes (they are). Insofar as this is an LA movie, it might not mine the doppelganger symbol for all of its depth, but that doesn’t mean it doesn’t do justice to its subject. Maybe it’s an LA movie in that it is zealously shallow and shamelessly faddish. What could be more fitting for La La Land?

Ten Films to Watch at BAMcinemaFest 2017
A Review of ‘The Guardians’
Review: The Most Surprising Element in ‘Isle...
Review of ‘Gringo’ starring Charlize Theron &...