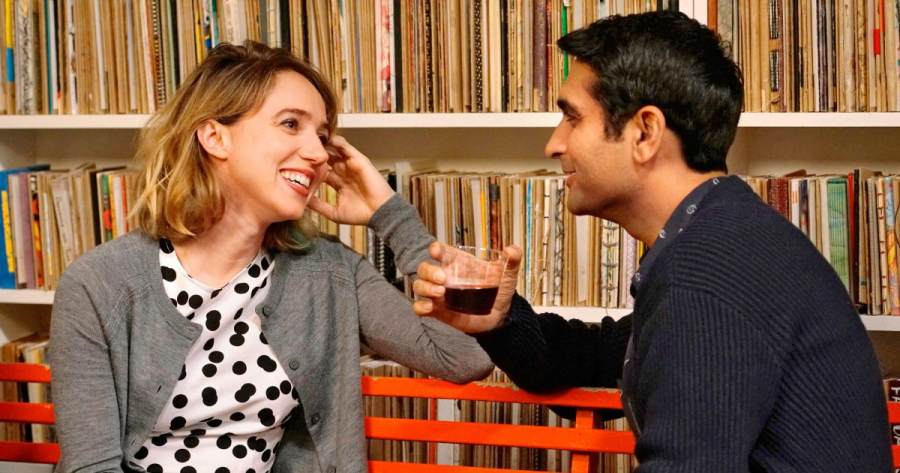 Producer Judd Apatow begets yet another not-quite comedy from a comedian, derived from personal history. In this rendition of a comic in arrested development, Pakistan-born Kumail Nanjiani (Silicon Valley, most notably), plays a version of himself: an aspiring comedian in Chicago who falls in love with grad-student named Emily (Zoe Kazan). Sweet, but tepid at times, The Big Sick is an ambling romantic comedy in which a string of one-night stands develops unexpectedly and requisitely into something more meaningful (heard this one before?), but the film’s biggest twist, is not the exit of the female-lead half-way through the film, quasi Psycho-style, after a mysterious illness lands her in a coma, but Nanjiani himself. Long overdue is the a person of color as a romantic lead in Hollywood, and so The Big Sick is unassumingly radical in this regard, despite its conventional plot executed with pedestrian direction and meandering pace.

Nanjiani and Kazan exhibit an easy chemistry, and after she falls ill, Kumail contends instead with her middle-aged suburban white parents. Played by Ray Romano and Holly Hunter, the former goofy the latter more exacting, and both are shaded with tones of political incorrectness as the film doesn't shy away from the inherent issue of Kumail's race. (Especially pointed and hilarious is a standup set gone awry with racist hecklers.) He also struggles with his set of own parental and cultural expectations, here inextricably linked, as he lies about studying for the LSATs, preferring to practice his standup routine. His comedy-aspirant friends include Kurt Braunholer, Bo Burnham, and Aidy Bryant who had a similar role in Mike Birbiglia’s Don’t Think Twice. Though never short on one-liners as they constantly upbraid and one-up each other, better laughs come from the scenes with Kumail’s family and the barrage of potential brides that show up at quite literally at the door. However, scripted by Nanjani and his wife, Emily V. Gordon (it’s not exactly a spoiler that Emily lives), the film is careful not to demonize anything—his parents, their point of view, arranged marriage—or give it the short shrift. it successfully hits an appropriate midpoint between scathing critique and blatant disregard in a thoughtful conclusion that doesn’t give in to Hollywood clichés, considering both Kumail’s romantic, domestic, and professional dilemmas, and yields to the greater notion of family in general— a universality that should prove broad enough for even the most close-minded of viewers.

Review: Wonderstruck
Interview with Imelda Staunton of ‘Finding Y...
The Shots That Won These Classic Films Their Best ...
Interview: From ‘Hamilton’ to Bollywoo...