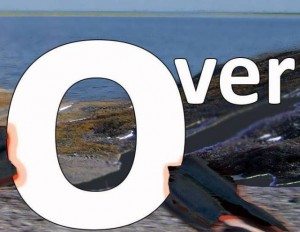 The New York International Fringe Festival has now begun, with over 200 shows to choose from.  We spoke with playwright Dave Chapman whose show Over plays at the Sheen Center through August 21.

StageBuddy: Dave, we spoke briefly on opening night and you mentioned that you started working on this play eight years ago. Can you give me an idea of what drove you to tell this story?

Dave Chapman: Yes, I started pecking at it in 2006.  I wrote the first draft in the summer of 2007 as part of a workshop with three other playwrights, and then let it ferment on a shelf until I revised it last year.

It began as a very different type of story.  I had seen a quote on the internet about how the person with the most power in any relationship is the one who cares the least.  And I wondered if there was a way to reverse it, so that the person with more  invested -- someone on the losing end of a break-up, for example -- could wield greater power than the other person.  So that was the initial premise: How can someone exert control after being dumped?

I wrote the first ten pages or so, and I was happy with them.  They felt honest to me, but I hadn't figured out where I was going.  I didn't have a story yet.  So I added Tabitha's entrance, to give Jack and Nicole something else to do.  And things progressed from there.  My plan for awhile was to have Nicole manipulate Tabitha's condition in some way to get back at Jack, which would have been a much darker (and probably misogynistic) play, and I realized that wasn't a world I wanted to inhabit.  As a result, the play became less about Nicole and Jack and more about Nicole and Tabitha.  It took me writing the entire first act before I realized what the play was really about.

The play beings in media res, moments after a relationship has ended. By the end of the first act Tabitha has appeared and the play has gone in a very unexpected direction. The play essentially tells two parallel stories that do not appear to be directly related to one another, although they involve the same characters and are happening at the same time. Are these stories connected thematically? Why must they both co-exist in the play? Or are they really different stories?

They are deeply and deliberately connected.  Over is a play about people that give up too much of themselves.  Tabitha's loss of self is the most extreme, but the other three characters are suffering from similar conditions.  Spence, for example, has started a quest to get in better shape, but he's not doing it for himself.  He's not happy doing it, and it won't likely lead to greater happiness in the long run because the object of his affection is never going to turn her eyes his way.  And even if she did, he wouldn't be himself anymore.  He tells Tabitha at one point, "Maybe the next time you come to visit, I’ll be half the man I am today."   That's the whole thing right there.

There are other thematic similarities between Jack and Nicole's relationship and Tabitha's situation, and I'm not sure how to explain them without spoiling key plot points.  But Jack ends his relationship with Nicole on the same night that Tabitha ends her relationship with someone.  The play is full of break-ups.  We also need Nicole to reevaluate her priorities before she can be of any help to her sister, which wouldn't be possible if she were still tethered to Jack.

How do you see your work in the theatre in contrast with what is being written and staged in America right now?

I don't follow what's happening in American theatre closely enough to answer that question.  I certainly don't start writing a play with the goal of making it stand out as unique from what everyone else is doing.  I try to listen to my instincts about what will make for the most engaging story.  Sometimes that means I end up with a script that can't easily be summarized in a couple of sentences.  But I don't make my living at this, so I can afford to write what I want and let the chips fall where they may.

This production was directed by Bryan Enk, with whom you first worked more than twenty years ago. How has that working relationship evolved over the years? And do you think you are still capable of surprising one another?

Despite that history, this is actually the first time Bryan has directed a script of mine, so right away we're dealing with a new dynamic in our relationship.  During those early years, we acted together and directed each other as actors, often with scripts the other had written.  We wrote a strange, self-indulgent screenplay together.  But mostly we've been sounding boards for each other.  As much as I would have loved to have been collaborating on projects all along, we haven't lived in proximity to one another.  When I was in Los Angeles, Bryan was in New York.  When Bryan moved to Los Angeles, I had already relocated to Portland.  It took Kevin Myers to make this project happen.

I think that we can and do surprise each other, though, because we've both matured as artists.  It's not just that we're capable of better work than we were in college.  We're also interested in different subjects now.  I won't speak for Bryan, but the plays I wrote twenty years ago are somewhat alien to me now, not because I would do a better job of writing them if I started today, but rather because now I wouldn't write those plays at all.   And yet, as much as the two of us have changed in the intervening decades and as little as we've seen each other, Bryan has somehow remained the person who understands the intentions and nuances in my writing the most completely -- which is what made him such a great choice to direct the show.

What would be your dream theatre project?

Dave Chapman: Writing a play can be rewarding, but I love directing, and I don't get to do it often enough.  I would love to have my own theatre space in Portland.  Nothing fancy, just something that could hold about 60 seats, where I could direct a couple of shows each year (occasionally my own scripts), and provide  a stage for other new work.   From a writing standpoint, my dream is always to get the script I'm working on at any given time in front of an audience -- something to justify the months of staring at it on the computer screen wondering how to write the next page.

“Over” continues its run at the Sheen Center as part of the New York International Fringe Festival now through August 21st. For more on FringeNYC shows, click here.

"Over" runs through August 21 at the Sheen Center.