December 2, 2014
Theater Feature
From Classic Film to Musical Parody – A Conversation with Unauthorized!

After hearing about a musical parody at the People’s Improv Theatre of my favorite 80s movie of all time, Back to the Future, I just had to meet the people who made this possible. The group, known as Unauthorized, are gearing up to present the third of a six part series of parody musicals based on well-known movies, each written, cast and rehearsed in just one month. Next up: GhostCatchers! We sat down with the producer Ronny Pascale, and writer/composers Ryan Mercy and Chris Barnes to see how the magic happens.

How did you guys meet?

Chris Barnes: We all work here. We both bartend and Ronny is the…

Ryan Mercy: Chris and have known each other for a while.

Chris: Yes we have been writing together, for about 10 years.

Ryan: We’ve had a couple shows in The New York Musical Theatre Festival and things like that.

Ryan: Our wheelhouse is writing musical theatre. Chris is a great writer in general but I write music and so we’ve collaborated... We had a lot of different ideas of things that we wanted to pitch but never really did it then Ronny came up with this crazy idea. 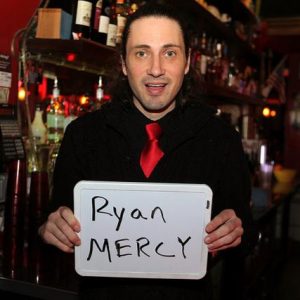 You were all just super drunk? Haha!

Chris: We all live near each other and we were giving Ronny a ride home one night. He was like, “Hey, you know what you guys should do? You should take a random movie and make it a musical and just do it one night.”

Ronny: No, it was a specific movie. I said Jurassic Park the Musical.

Chris: Oh yeah, but then we found out there already was a Jurassic Park the Musical, and actually the PIT had a great two person Jurassic Park show going on.

Ryan: You’ll find that as you do this there are a lot of musicals that already exist.

So once Jurassic Park was out of the question what was next?

Chris: Well, Ronny kind of said it jokingly but Ryan and I looked at each other and went, “Oh wait…” because any movie we’ve ever watched we’re like, “We should make that a musical,” but we never have because it would be hard to get the rights. Then we thought, “Well, if we just do it one night…”

Ronny: And then there’s parody law.

Chris: Right, and if we make it a parody then it's okay.

Ronny: You also have to comment on the original production within the parody and put in scenes or plot lines that didn’t exist before.

How do you choose the next film to be transformed into a musical?

Ryan: We have a master list of films that are really well known.

Ronny: I feel like the nostalgia factor has to come into play too.

Chris: A lot of classics.

Ryan: Yeah, part of this is still up for discussion.

Chris: One thing we learned with Steel Petunias was that action movies tend to be the easiest, because they probably shouldn’t be musicals. It’s probably why we added a 15 foot demon puppet to it. But in the beginning of the first two shows we had the audience vote between two different movies. We still get suggestions all the time from people, they get really excited.

So you give yourselves only a month to write, rehearse and pull off a full length musical?

Chris: Yeah, when we were putting the idea together we decided it should be a series. We wanted the audience to have somewhat of an idea of when each show would come out, but of course the PIT is super busy so it’s not exact.

Ryan: But it’s about a month maybe a little over.

Chris: Yeah, and in the New Year it will be more set.

Ronny: Also when you are only given a month people understand how little time you had to prepare. As opposed to rehearsing for six months…

Chris: Well the crazy thing is that the first one, That 80s Time Travel Movie, I sat there watching in awe of myself thinking, “I can’t believe this is happening” -- and literally the day before was the first time we ran through the whole piece. And we were like, “This might happen." My jaw was dropping throughout the whole show because of the actors pulling it together. Like this one song has a bunch of rap where he talks about the flux capacitor and he really pulled it off.

Ronny: They also have like full on crazy dance routines.

Chris: It amazing what you actually can do in a month. We go all out with props and everything. Like we made a DeLorean happen -- that was just cardboard cutouts, but came together like a transformer.

Ronny: And dances at one point.

Chris: For GhostCatchers I made a Stay Puft Marshmallow Man and Slimer so I’m excited for people to see it. I mean for 10 years we’ve been doing this stuff (writing musical theatre) and making a little headway, but Ryan invited a Broadway producer to the first show and usually they leave but he waited to meet us. He even waited 30 minutes after the show just to talk to us. This isn’t something he would finance, but in 30 days we did more for our careers than the last 10 years.

Ronny: And the fact that the owner [of The PIT] loved it so much. He sees so many shows so for him to decide to come on as co-producers in 2015 is a big deal for us.

Where did you find your cast?

Ryan: We have been really fortunate to be in this community of the PIT. We’ve pulled about 90 percent of our cast from people who have taken classes here and have done shows here…

Ronny: And people from the house teams.

Ryan: It’s been really advantageous for us to have improvisers for our purposes of doing it so quickly. We know that as long as we give them the tools and put them up on stage they’re going to give us a show.

Is it a different set of actors each time?

Ryan: No we’re trying to pull from a company. But we definitely do re-audition for specific roles to get more people into the fold.

Chris: It also helps when the performers know what they’re getting themselves into because they’ve done it before.

Ronny: Yeah, and since they are improvisers, if they mess up they’re good at covering it up.

Ryan: It’s turned into a really good synergy of our skills sets knowing how to write musical theatre and then combining that with the awesome talent that’s here. Because it allows us to do what we want to do a lot faster than we would ever be able to do it and together we create magic.

What makes these parodies different from others?

Ryan: We put on a SHOW. We don't do anything half-way. We are first and foremost musical theatre writers, so in our limited timeline we strive to create fully realized, high-quality genuine pieces of off-Broadway caliber musical theatre, and along the way we make you laugh -- hard. But what surprises our audience is that they are also watching a really, really great musical. We try to stay true to the film and just heighten it. So if there is a sad moment we go there, like with Steel Petunias. We could have easily made the funeral scene funny but we wanted to keep the integrity of the story. So we let the character have that sad moment.

Ryan: We also try really hard to find a moment of heart in each show. In the real world of musical theatre we try to write musicals that have a message and a meaning. We wrote one that’s coming up to the ranks called Most Likely to Die, it’s a slasher horror musical. It takes place at a high school reunion and brings up issues like bullying. Really our mission statement is there has to be a reason why people are sitting in a room watching something we created, so if it's just to have fun that’s a reason, but usually we have a deeper meaning.

Chris: Well, I even had someone come up to me after That 80s Time Travel Movie, which is not sad at all, but she said she was crying because it took her back to when she did high school musicals and community theatre. She said, “It just took me to opening night days.”

Ryan: Chris is a great writer who does a great job, like with Marty McFly and Doc Brown it was his idea to have a song about them being best friends.

Chris: Well sometimes when you have no time to think something brilliant comes out.

Ryan: But people told me in other parodies, Marty and Doc Brown had a gay relationship, which didn’t even occur to me because that’s not true to the characters.

Yeah that doesn’t make sense to me as a huge fan of that movie.  Okay so the final question is, why should people come see Ghost Catchers on December 8th?

Ryan: People should come see our show because I guarantee that you are seeing an Off-Broadway caliber Ghostbusters musical parody put together in about a month that will blow your mind.

Ronny: Especially for people like me, who have never seen a musical, it was really amazing.

Ryan: Also The People Improv Theatre is doing some awesome shows right now so its worth the $20 to see a show that could easily cost more.

For more on Unauthorized, check out their Facebook page here.