March 10, 2015
Theater Feature
"Hold On To Your Butts": Catching Up with the Team Behind the Hilarious Live Reenactment of Jurassic Park 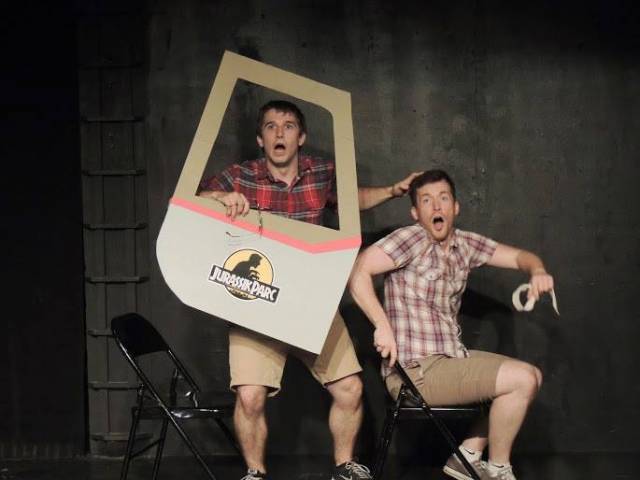 Everyone has a favorite movie, but odds are you’re not able to reenact almost every scene of it, sprinkle in some humor and entertain a packed theater. Nick Abeel, Kyle Schaefer, and Foley artist Kelsey Didion are doing just that with Hold On To Your Butts, a live shot-for-shot reenactment of Jurassic Park at The PIT.  Nick claims to have seen Jurassic Park 100 times and Kyle is close behind, so it only makes sense that they would share their joy for this film with the world.  When I walked into the theater and saw a table covered with random items such as empty soda cans, a flute, long green grass and silverware, I had no idea what was in store. But just 10 minutes into this inventive show I was completely enthralled: already they had used cardboard cut outs as frames, umbrellas as a helicopter and played five different characters, as Kelsey sat calmly and brought the props to life.

“Why did they to choose this title?” you may be asking yourself. Director Kristin McCarthy Parker explained to me that this is the famous line Samuel L. Jackson muttered twice in the film (he really doesn't say many lines other than that); and when Nick recited the line, the audience cheered in excitement.

I had the honor of sitting with the cast, director and producer (Allyson Morgan) to find out more about the origins of this hilarious and witty show.

How did “Hold On to Your Butts” start?

Nick Abeel: It started out as a one night only thing in July last year and Allyson [Morgan, Associate Producer] saw the show and introduced us to The PIT and they picked us up for five nights in September. That was pretty successful so we decided to do a remount. We’ll do 15 shows for this run.

Kristin McCarthy Parker: We came up with the idea one night when Nick and this guy were quoting the movie back and forth to each other for 10 minutes and I was like “Okay guys, this could be a two man show.” That was a year and half ago and we spent the first couple of months trying to figure out how we could make it come to life. We played around with shadow puppetry and flat props trying to figure out what might work, what might not. We had originally submitted it to a festival but got denied and that’s when we decided to just do it on our own.

Where was the first show?

Nick: It was at Under St. Marks on the Lower East Side. We had worked there a lot so we knew it well which made it helpful to build it there. When we came here the stage was much bigger so we added new things like the disco ball joke. [The PIT stage has a disco ball hanging from the ceiling.] It looks pretty different from what it did in July. 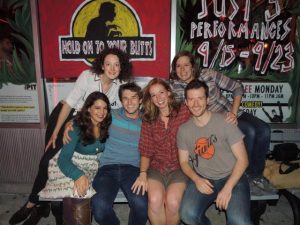 Kelsey, were you doing Foley with them from the beginning?

Kelsey Didion: Yeah! The parameters we set up were to use objects to make the sounds and vocal Foley added in. As far as underscoring the musical elements, Kristin and Kyle and Nick kind of gave me free range to play with that. So that was something we added as another layer. We liked the idea of a more lush sound to support this more scrappy, umbrella cardboard world that we created. I used a my acapella experience, the tracks are all vocal. I used this neat program that Nick showed me, where I can layer my voice and change my voice.

Kristin: She wasn’t on stage for the first version of it at St. Marks though. She was more to the side. I’m really excited we have Kelsey on stage now so that you can see all of the magic happening.

Kyle Schaefer: It was one of the big things that people said: “I wanted to see what she was doing.”

Nick: Yeah, so when we walked into The PIT we decided right away, let's put her to the side or maybe in a corner on the stage where people can see her the whole time.

It was really cool to watch her making the noises the entire time, especially when John Hammond was making a sandwich and she was making a sound for every movement.

Kristen: That’s why we put that moment there to say, “See this is how the show is going to work, we have a Foley artist.”

Kyle: When we first started it was just terrifying because we’re were building this thing up until the last second. I was thinking, “I have no idea where this is going to go, or what comes next.” We kinda just did the movie because we decided we were going to do it in a month. Then when we moved it here [People's Improv Theater] we had more time to work on it, let it breathe and marinate on that first show. We opened the show up and were able to play around with it more. I feel like that’s where some of the jokes developed. Now Kelsey on stage is great because she has all this stuff to play with, but at first she just showed up to rehearsal, Nick and I were still trying to figure things out and remember things from the movie, and she just jumped in she started making noises!

Nick: We've gone back and forth about what “the rules” are. Like are we allowed to make any of the noises? Does she make all of the dinosaur noises? She mostly makes all the noises. In the beginning of the show we’re sort of teaching the audience how to watch it and setting up the mechanics of how it will work, like with the frames and switching people. Then we take the rules to the next level or bend the rules a bit and mess with the audience.

How did you all meet?

Kyle: We are Evansville people. We all went to University of Evansville.

Nick: Yea we went to school together and Kristin and I have produced several things together. I did a short 7 minute show like this, but Back to the Future, in a short play lab called SHOTZ.

Allyson Morgan: and that’s where I met these guys. That is how I saw the show originally, because we met via Shotz I am not an Evansville person. Haha! For the record.

Nick: Kyle and I lived together in college and it feels like we’ve known each other for 10 years now. 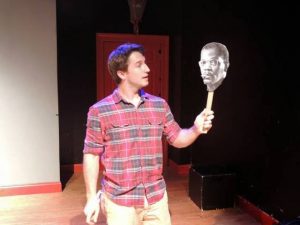 Kyle: No not really, not like SNL style. If I’m talking about someone I’ll impersonate my friends and sometimes people say “That’s dead on! You should do impressions.” I don’t think so. By the way, that was a horrible impression. None of my friends talk like that. I’ve always loved comedy. I've always done comedies.

Nick: We've done the show so many times now that we start to mess with each other and sort of take things a little farther than we did before just to make each other break. I’m a pretty soft touch though so I’m usually at Kyle’s mercy.

Kyle: The best part is we take it so seriously because this really is a great film that we really love. I think that makes it even funnier. We have these moments that are cheesy but we are in it really saying goodbye to the Island. We really take that moment.

Nick: We really settle into that real thing. It's really committing to the stupid things.

Kristin: I think that’s what wins people over because at the end of the day it could just be two adults running around with flashlights and umbrellas, but because we treat it so reverently and we view it with such meaning, in addition to the comedy we layer on top of it, it allows people to really invest in the world and have a good experience.

Hold On To Your Butts continues its run at The PIT through March 28.