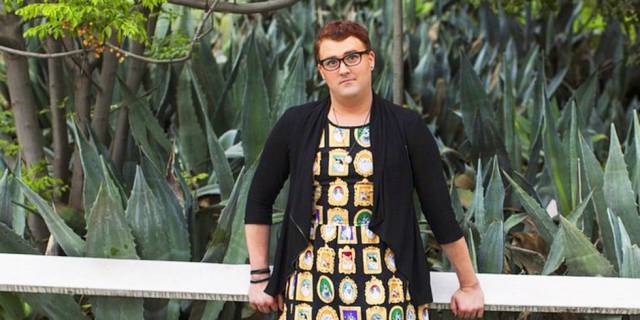 Rye Silverman is a stand up comedian from Ohio rocking it in Los Angeles, and with her hilarious forthcoming album, Intimate Apparel, and a new role as ModCloth's first transgender model (they even named a dress after her), she’s definitely one to watch. I had the pleasure of listening to her album ahead of its official release (April 28) and it had me cracking up all the way through. Rye really lets you in, telling personal stories about discovering her gender identity and making fun of the stereotypes people push on the trans community; plus, her dissection of male lingerie and shopping for jeans had me cackling out loud.

When did you move to LA?

When did you discover you wanted to be a comedian?

Pretty young actually. I think it was the movie ¡Three Amigos! that did it for me. I was obsessed with Steve Martin as a kid. 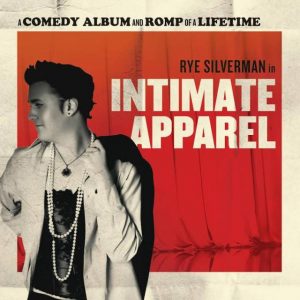 When I was really little I said I wanted to be an inventor, but I think what I really meant by that was that I wanted to be like Doc Brown from Back to the Future. As soon as I started school and found out what math and science were, I was pretty much locked into pursuing a career in show business.

I love how personal your jokes are, ranging from fast food in Ohio to finding the right lingerie. How did you develop this style?

Mostly from eating delicious burgers in awesome corsets. Which is not a good combination, I don't recommend it. That's a bit jokey of an answer but it's also pretty close to the truth.

How would you compare your material and performance from when you first started to now?

Well that very much flows from what I started talking about with that last question. When I first started comedy I was very focused on the writing so it was all very tight, very polished material. About halfway into my career so far is when I really took this big shift into just telling more personal stories and filtering all of my material through my own empirical observations. My act is deeply personal now, but when I started it was the opposite.

Where did you record the album and what was the process like putting it together?

I recorded it at the Tao Comedy Studio in Los Angeles, which does classes and also has several very female positive shows and open mics, so it was a place I felt pretty relaxed and comfortable onstage. Putting it together as an LA comic was a bit different than if I were on the road more often, because I only got a few truly long sets in order to do a good chunk of the material in one sitting. It was a bit of a challenge to build what ended up being an hour long album in 7 to 20 minute chunks. But I broke it up into different topics so that it would feel like it had a flow.

When did you start posting your style on ModCloth?

About two years ago. I had been stalking dresses on their site for a while and finally made my first purchase and wanted to show it off. I was nervous to see if they'd even let me post, which is so funny to me now when I look back on just how positive they've been towards me since then. 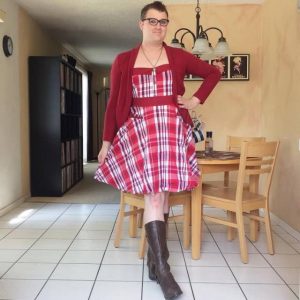 What was it like modeling for them and meeting the ladies of ModCloth?

My day of 'modeling' was something of a dream come true; I mean that's just something I never thought would happen for a girl like me. I've done glamour shot and boudoir-style photos already, like the one on my album cover, but I'd bought and paid for those myself. This was getting to meet up with a fashion photographer and run around LA taking pictures. It was quite an experience. That was actually fun also because the photographer, Kristin Cofer, was new to LA so part of the day was seeing LA through her eyes and all the different types of light and such she was finding there. It reminded me how beautiful the city I live in is.

Meeting the ModCloth team was great, and also super surreal. They did this pop-up event called ModCloth IRL here the same week my feature was launched on their page so when I showed up there, all of the staff rushed over to meet me one by one whenever I'd walk by. I was probably beet red. Here I was excited to be there and get to play dress-up with some of their featured styles and they were as excited to meet me. I'd met Susan [Susan Gregg Koger, Co-Founder and Chief Creative Officer of ModCloth] once before when she came to one of my shows in town, and I really like her philosophy on style, body issues, and loving one's self.

I love the dress named after you. Do you have a million of them in your closet?

Thank you. I love it too! I kind of lost my mind the first time I put it on. Sadly I only have the one so I'd better take care of it I suppose.

What are the next steps for you?

I'd really like to get back on the road again. There's a few cities I want to get back to and some I've never been to before that I'd like to get to. So that's going to be a big focus in the next year or so. Getting back out there and not going broke while I do it.

Other than listening to your album (of course) where can people see or hear more of your comedy?

I have a YouTube page with some clips, although it's a bit outdated because I was focusing on the album. Some of the clips are from prior to or during my slow coming out process so it's an interesting journey through the evolution of my sense of self. Otherwise if you want to see more of my comedy, I guess find a bunch of people who also want to do it and see if there's a theater space or club in your town or college or whatever that would pay to have me come.  You can also check out https://chicklikemeblog.tumblr.com.

Intimate Apparel is out April 28. Pre-order it at theexcomedy.com or Amazon.