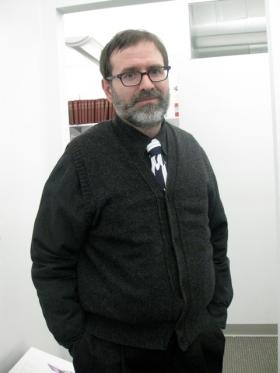 Sunday Night Improv is an improv jam full of diverse performers from varying troupes in NYC, hosted by the veteran improviser, film maker and author Tom Soter. At most improv theatres you will see a group performers in their 20s and 30s mocking life as we know it, but at Sunday Night Improv that’s not the case. The majority of the performers here have been in the game since the early 90s, making those 20-somethings look like amateurs.  I sat down with Tom to get an inside look at the history of the show, where it’s headed and his lifelong adventure in improv.

You studied writing in college, how did that lead you to improv?

Yeah, English Lit. I was working at a job with my girlfriend and she was involved in a cable access show. I don’t know if you know cable access, it’s still around, but it was a really big thing in the '80s. You could get on TV just like you can do on the internet now. The show was called Public Abscess, it was a terrible name and a terrible show. She wrote sketches for it and she asked me if I would help her with one. So I wrote one and then I appeared on the show a couple of times after that. One of the writers wrote a piece that he said I could do. It was about a blind critic named Vincent Can’t See. There was a critic at the time called Vincent Canby, so it was a play on his name. I had this long monologue to memorize. Although I had been in various plays in the past where I had to memorize dialogue I’d never really done a monologue before. It was live television and when the cameras turned on I completely forgot my lines. The writer was standing off stage whispering the lines to me, and my brother thought it was hilarious because he said it looked like the bit was that I couldn’t remember my lines.

After that my girlfriend and I decided we wanted to improve our writing. I went to stand up comedy classes and I didn’t like those, then I went to sketch writing classes and I didn’t like those, then we went to see an improv show at Chicago City Limits on 80th Street. I was blown away by it. I started taking classes there and continued to for seven years. I was taught by people from the main company: Carol Schindler, George Todisco who was the founder, and David Regal. I learned a lot there, then in 1984 I started performing with the New York Improv Squad. There was a bunch of us in class that would meet and practice at night and on weekends in a studio and we decided to perform. We had a lot of rotating people but there was a core group of people who came every week. One night Chris said he had a gig for us and we voted that I would be the leader and would wait to start performing till September. The next day Chris Hoyle called and said, “I signed us up for the gig this weekend,” so it contradicted what we had decided the night before. He was right in a way because you can wait forever to get something to be perfect but you don’t know if you’re ready till you just do it. 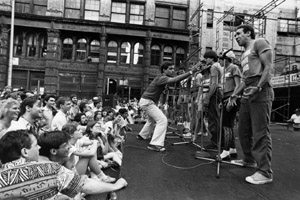 Where did The NY Improv Squad perform?

One night our gig was canceled so Chris Hoyle said, “Why don’t we just perform in the streets?” so we did. In the first round we made one hundred dollars and then we took a break, counted our money then went back and made another fifty dollars. We were pulling out games that we had never played, but we had only seen performed at Chicago City Limits. We started doing that every week, it was very addictive. First we were performing at night on Columbus Avenue, when we performed in Washington Square Park we made a lot of money. The place we made the most money was when we performed behind the Delacorte inside Central Park.

We met every Saturday at 2pm to do a two-hour set in the park. We would always start with Gripes (an improv game where the troupe stands in a line and a “conductor” points to one at a time. When pointed at the improvisor complains about something and can not stop complaining until they are no longer being pointed at), because that game made people wonder what was going on, it draws them in. After that performance we would go to class at 4:30pm, at 7pm we performed at The Improv, then take the money we earned thus far to eat dinner before our 11pm show at the Tripple Inn where we warmed up the crown with a 30 minute set in the bar. We would spend about 12 hours together doing improv.

You all must have gotten along really well.

Yeah, we enjoyed it. We were a very tight knit group for about two years. It was a good relationship, the group. We have some footage of us performing on the street in my documentary Sense and Nonsense. We had a reunion a couple months ago and most of them turned up. The chemistry was still there.  I learned more from performing on the street than I did any class. The crowd will only stay there if you’re good, we’d do anything to keep them there.

What are some crazy things that happened while performing on the street?

One night a guy on the squad, Jeff, and I were doing a scene. I don’t know if they still do this but street lights used to go out pretty regularly. A street light went out, he just used it in the scene by saying, “You forgot to pay the electric bill again,” and it got a big laugh.

We would sometimes get water thrown on us, from people in their apartments, because we were making a lot of noise. We tried to perform in front of the Metropolitan by the steps, where the mimes were, but after a set one of the mimes came over to us and said, “This is mime territory. No one performs here without our O.K.” 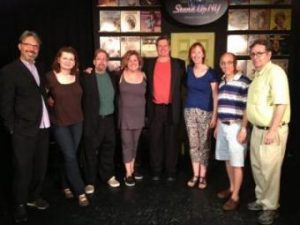 Who from that group is now performing with Sunday Night Improv?

Carl Kissin, Chris Hoyle and sometimes Deb Rabbai does it.

How did you become involved with Sunday Night Improv?

Well I hadn’t performed in a while because I had just been teaching. In 1988 a guy named Ian Prior, who was running a jam called Ian’s All Star Improv Jam, asked me to come down there. It had been about one year since I had performed. So the first game we played was freeze tag and it was the first time I had ever froze on stage. I didn’t know what to say so I started describing the woman in front of me and Ian said, “That was really weird." After that I was fine but it was like starting up a rusty engine. I continued to go every other week until 1993 when Ian retired to spend time with his daughter. He passed in on to John Webber who was a performer at Chicago City Limits, and John asked me to join him. He left after about four months and I renamed the show Sunday Night Improv and I’ve been doing it ever since. We’ve had a lot of performers pass through.

When did you start teaching?

It started in ‘87 because I had done seven years of classes, my teachers all left and the original company broke up. I was taking class from my peers someone who had taken classes with me. I thought, “I know more than he does." So I said to some guys at CCL, “Would you like come to a class? I’m going to have a class on Monday night." One of them suggested Tuesday so I did it then, and the guy I changed it for didn’t show up but two other guys showed up. I made my minimum of people for class two people. I spent two hours with them and they came back next week which lasted for a month. It was always two or three people that kept coming back. I figured if you offer a good class people will come. You have to have a stick-to-it-ive-ness to build a group of people to take class. So I’ve been doing it since ‘87. I’ve had a variety of people taking the class; a blind guy, a guy with MS, a guy with one arm and one leg. I’ve had my share of crazy people and stalkers. I’ve had angry people and sad people.

Were there actors who were a part of Sunday Night Improv or took class from you who ended up being well known performers?

David Fury from 24 was in my classes, he was really funny.  Beth Littleford who was on the Daily Show, she was a student of mine. Mike Bencivenga, he’s a writer known for the film Happy Hour and play Billy and Ray. Denny Siegel, who went on to be on Who’s Line is it Anyway?; The Chainsaw Boys, they were in my class. I used to have a rule that you had to be in a group to be in the jam, so Michael [Bridenstine] and Mike [Bencivenga] used to end the game “60 second theatre” with a chainsaw, so I called them the chainsaw boys. 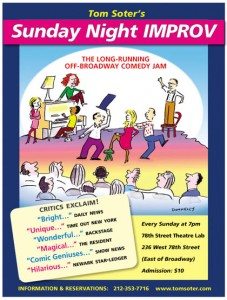 Do you prefer teaching or improvising?

I think I get more out of teaching, actually, than I get out of performing. You have to have sharp senses when you’re performing but when [you're teaching] you have to be even more sharp. When teaching you’re working toward a goal to make people more comfortable performing. I get a lot of charge out of it. I often go into class tired but leave really energized. It amazes me what people can do in the right environment.

The next big show for SNI is April 5th at The West End at 6pm. More details here.