December 21, 2014
Theater Feature
Cyberterrorism – Can it Shut Down American Theater? 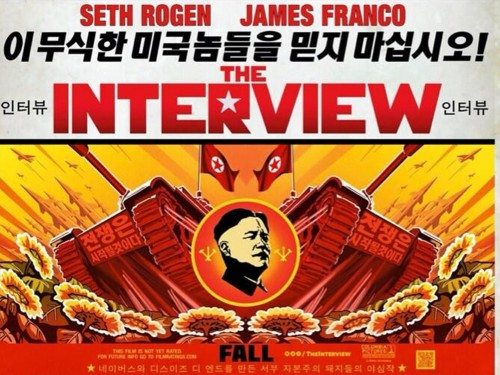 Last week was challenging for the entertainment industry. Not since the ‘Red Scare’ has there been such an aggressive assault on the creation of art and media in America. And certainly, not since the height of McCarthyism have we seen a lion of the entertainment industry (Sony Pictures) bow to such radical coercion. While Hollywood mulls over the long-term effects of this attack, arts professionals around the country will be considering how or if cyberterrorism could impact their organizations.

Big money and wide viewership makes Hollywood an obvious target, but American theater too has a history of engendering ire and outrage, prompting protest and in some situations garnering censorship, shuttering or an outright ban. So, while we wag our fingers at Kim Jong Un and his posse of purported cyber criminals let’s take a look at a few moments in American theater history that may be equally cringeworthy.

1. In 1774, the First Continental Congress, considering theater to be a lowly form of entertainment, sought to ban it in its entirety with the inclusion of Article 8 into the Articles of Association.

We will, in our several stations, promote economy, frugality and industry, and promote agriculture, arts and the manufactures of this country, especially that of wool; and we will discountenance and discourage every species of extravagance and dissipation, especially all horse-racing, all kinds of gaming, cock-fighting, exhibitions of shows, plays and other expensive diversions and entertainments. 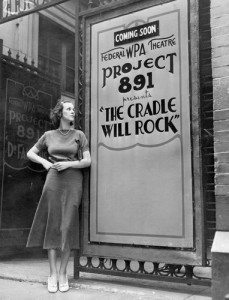 2. In 1937, at the height of the Great Depression, United States federal authorities shut down the Works Progress Administration (WPA) Theater Project production of Marc Blitzstein’s musical The Cradle Will Rock prior to its opening. The production, helmed by John Houseman (producer) and Orson Welles (director) rankled Conservative members of Congress who found fault with the left-leaning allegory of corporate greed and rampant corruption. But, as the saying goes, the show must go on, and so it did. At the 11th hour, with ticket holding patrons at the door, Welles and Houseman announced an alternative venue and found a way for union actors to appear in a non-union venue. The bold efforts of Houseman, Welles and the actors involved became the birth of The Mercury Theater one of New York’s most prominent repertory companies.

3. Eugene O’Neill’s Strange Interlude (1928), a four-hour drama that won him the Pulitzer Prize, scandalized audiences with dramatic material that included extramarital relations and serious consideration of abortion. Although it was produced on Broadway and much lauded, many American cities refused to allow it to be seen in their confines. When the mayor of Boston banned a 1929 production, producers moved to a theater in nearby Quincy, presented it with a dinner break and gave the first Howard Johnson's restaurant a huge boost in business and recognition.

4. Religious groups have often sought to shut down theatrical productions based on perceived religious offenses. 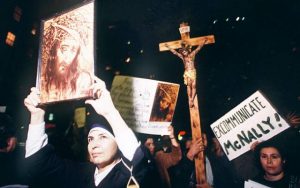 Terrence McNally’s Corpus Christi (Manhattan Theater Club – MTC, 1998) ignited controversy and outrage at the gay themes portrayed in the not-so-veiled story of Jesus and his disciples. After receiving threats of violence at the programming of the play, MTC considered cancelling it prior to rehearsal. A petition circulated by some of the American theater’s greatest contemporary writers, directors and performers supported production so the show went on, but not without protests from religious groups and members of the Catholic clergy.

The original Broadway production of Jesus Christ Superstar (Tim Rice and Andrew Lloyd Weber - 1971) was publicly vilified by religious groups claiming it sent the wrong message.  Jewish groups worried that the musical would stir up anti-Semitism, while the Faith Free Presbyterian Church warned: "If you do not wish to fill your mind with Satan's evil misrepresentation of the Son of God, you should avoid Jesus Christ Superstar."

5. What started in the 1980’s under the Regan Administration, as a effort to abolish the National Endowment for the Arts, came to a head in 1990 with the trials of “The NEA Four”, Karen Finley, Tim Miller, John Fleck, and Holly Hughes. These performance artists had been granted funding by the Endowment after passing the NEA’s rigorous peer review process. However, in a stunning reversal, each had their grants overturned by then NEA Chairman, John Frohnmayer, appointee of George H.W. Bush, citing troubling subject matter as his reason. In a case brought before the Supreme Court, National Endowment for the Arts v. Finley, the artists were vindicated and awarded amounts equal to their grant monies.

6. Faculty and administrators at many high schools around the nation are currently under increasing pressure by individuals, religious groups and parent organizations to cancel student productions of musicals and plays considered by the fringe ideology as dangerous to or unsuitable for students. Within the past year alone productions of Spamalot, The Laramie Project, Almost Maine, Legally Blonde, Rent and The Vagina Monologues have been shut down (the latter, because students had to say the word vagina). While the attacks may not rise to the level of North Korea’s cyberterrorism, the tactics employed, when adjusted for scale, have proven no less aggressive using the Internet, e-mail, and local media to publicly slander and threaten the livelihoods and well-being of participating educators who do not comply.

7. Lest we forget that coercion and censorship is never far away, on October 22, 2014, an angry mob of protestors gathered outside the Metropolitan Opera to demonstrate against the production of John Adams’ The Death Of Klinghoffer. The opera, centered around the 1985 hijacking of the cruise ship Achille Lauro and the brutal murder of a wheelchair bound Leon Klinghoffer, portrayed the Palestinian hijackers as three-dimensional humans, an artistic choice that was unfathomable to those who gathered in protest. None of the protestors had ever seen the opera. The production ran as scheduled in its entirety.

To date, no group has used a large-scale cyber attack to target American theater but perhaps that is because it a relatively new, complex and expensive tool. As with all new ideas, at some point they become more mainstream so it would come as little surprise to this writer if it were added to the toolbox of some of America’s more extreme fear-mongering anti-art, anti-free speech groups. As our freedom of speech faces increasing pressure from outside our borders, we must consider how we will deal with the same tactics should they arise from within.