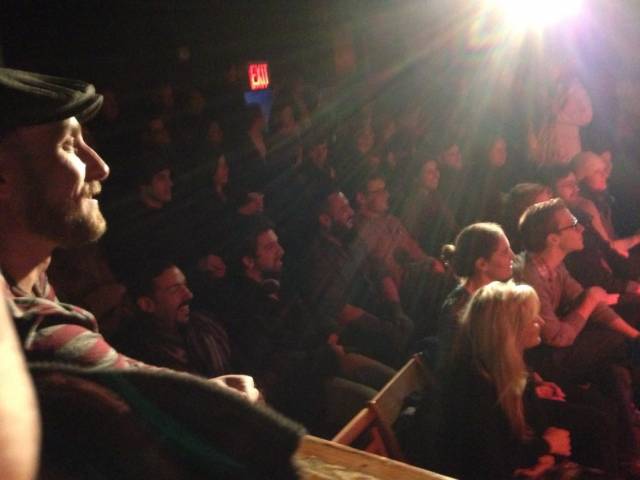 Are you looking for a way to spend a Sunday evening that is guaranteed to entertain you and not break the bank? The Cabaret Showdown is your ticket. Part live karaoke, part Jeopardy, and all musical fun, the Showdown attracts singers from all-over the Tri-State area who are ready and eager to pit their musical and improv chops against colleagues for the prize of a venue for their own show.

The brainchild of creative partners Donald Garverick and Mark McDaniels, The Cabaret Showdown has been a monthly fixture at Under St. Marks since November 2011. Garverick, a prolific director, choreographer and producer, and McDaniels, currently an Associate GM at BlackByrd Entertainment, teamed up several years ago to create the award winning show Show Choir! - The Musical. They developed the Showdown as a way to raise funds for their New York Musical Theatre Festival run.

I recently had the pleasure of being a guest judge at The Cabaret Showdown and took a few minutes to chat with the Garverick about it.

Donald, how do you describe The Cabaret Showdown to the uninitiated?

The Cabaret Showdown is a monthly game show that offers a unique mixture of live karaoke and Jeopardy. Contestants are asked to choose songs from various categories listed on the game board with no knowledge of what the song will be until right before they sing. To level the playing field all contestants are given a copy of the sheet music and will be accompanied by a live pianist.

What inspired you and Mark to create The Cabaret Showdown?

In 2010 we created the showdown as a fundraising event for our musical Show Choir! – The Musical at NYMF. Everyone had an absolute blast and it was our most successful benefit that year. The following year we did another showdown to help fundraise for the Under St. Marks Theater and halfway through the show the theater manager, Erez Ziv, pulled Mark aside and told him “This is great! We should make you one of our monthly events!” A few months later we were in production.

How do aspiring contestants sign up and is there anything they need to know about participating?

Anyone can enter by sending their name and interest to cabaretshowdown@gmail.com. There are a maximum of 8 contestants per show and submissions are accepted on a first come first serve basis. We like to be fair about the process. Contestants should be comfortable singing on the spot and be willing to improvise songs they are not familiar with. Some of the best moments of the Showdown are when contestants have to fake their way through songs they have never heard or seen before.

What is the prize they are competing for?

The winner receives a free one-hour booking at Under St. Marks for their very own show.

With all of the fabulous talent in New York City, The Cabaret Showdown must attract some amazing performers. Are there any performances that stick in your mind?

We just never know what the contestants are going to come up with! One of our early contestants was an incredible comedienne, Lauren Maul, who came to the event dressed as an aging cabaret diva (complete with gown, turban, huge dangly earrings, fuzzy slippers and horn-rimmed glasses) and asked us to call her Marilyn Summers. She was hysterical with a real talent for improv. At one point she even kicked off her fuzzy slippers to reveal tap shoes. She ended up coming back and playing the showdown a few more times before finally winning it.

You are joined on-stage and behind the scenes by a band of dedicated and talented collaborators. Who else will your contestants and audience meet at The Cabaret Showdown?

We are very lucky to have the talented Assaf Gleizner as our pianist. His ability to keep up with the off the cuff nature of the show is astounding. Assaf was born and raised in Tel Aviv, Israel and moved to the United States in 2007 to get his B.M. in jazz performance at SUNY Purchase. Assaf is an accomplished jazz musician, side man and music director.

Diana Byrne is our beautiful co-host and our resident “Vanna White.” We lovingly call her DiVanna. She is a choreographer and dancer with extensive credits.

And, of course there is Mark McDaniels. Mark is a jack-of-all-trades; composer, performer, voice over artist, producer, house manager and mosaic artists. He and I are the co-authors of the award winning original musical comedy Show Choir! -The Musical (FringeNYC '07, NYMF '10, Edinburgh Fringe '11, A.C.T. San Francisco '12).

How does the judging process work?

We have three judges who are there to watch the contestants, give constructive feedback and select a winner from each round and ultimately the champion. We keep the mood fun, casual and supportive so there are no “Simon Cowells” allowed at our shows. We’re asking contestants to do something difficult so the more relaxed they feel the better they perform.

Our judges are people who work in all aspects of the theater/cabaret industry producers, directors, writers, actors, etc. Some of our regular judges include Michael A. Alden (Tony Award and Emmy Award winning producer), Lisa Asher (MAC and Bistro Award winning performer and director) and Rick Miller (Rick Miller Agency.)

New York is full of amazingly talented singing superstars. Have you ever been surprised by who showed up to compete?

Yes! About a year ago we had a contestant named Oshri Elmorich who stepped out of the audience to participate as a contestant. This handsome gentleman was incredibly talented (not to mention very sweet and humble) and made it to the final round, which he ultimately lost. Only afterwards did we learn that he was the reigning South African Idol who had been sent to NYC to work on his album with Wyclef Jean. He actually came back and played again last month.

What does the future hold for The Cabaret Showdown?

Most immediately, we have our Annual All Star Showdown coming up on February 8 where we bring back 2014’s Showdown winners to compete for the 2014 All-Star crown. This will happen immediately following our regular showdown, “I Love Rock and Roll”. We also host All Star Concerts every 6 months where past winners come back and perform a 10-minute set.

We would love to be able to host a few uptown showdowns in the theater district with Broadway talent. We are also looking into taking the Showdown to other major cities in the country or maybe TV. The sky is the limit!

This article was has been updated.
Cabaret Showdown is held every month at Under St. Marks Theatre. See https://www.cabaretshowdown.com/