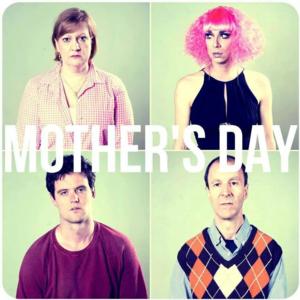 In February, Reginald L. Douglas was working at Luna Stage on Athol Fugard's Master Harold and the Boys and we got a glimpse into the life of the talented young director. (Read our interview here.)  Pinned as one of our directors to follow, he's making a splash at the New York International Fringe Festival, directing the world premiere of the dark family drama Mother's Day by Colin Drucker -- a Fringe show you don't want to miss. We spoke with Douglas about the collaboration process, drag queens and what popular song this play reminds him of.

StageBuddy: What is Mother's Day about?

Reginald L. Douglas: Mother's Day is about a 29-year-old drag queen who comes home to tell the family the startling news on Mother's Day, having not been home in a year in half; it's big surprise for them to see him.  Deeper than the plot is a play about acceptance and what limits we as people put onto our relationships.  It's a play about learning to love yourself and deciding who you are.

SB: If this play were a song what would it be?

RD: All of our scene transitions are being done to "Girls Just Wanna Have Fun" in different versions, that's really been the guiding musical influence behind the show for me.  It's something really fun about the song, the great thing about Drucker's writing is it's deeply sad, poignant and powerful but also really really fun.  That's one of the great things the play has to offer with a great mix of light and dark.  It's full of comedy, real stakes and real relationships that people are fighting for and there's something in that song which captures that.

SB: How has your collaboration process been with the playwright and cast?

RD: This is Drucker's first produced play.  He wrote it a few years ago and he left it untouched on his desk.  Our lead actress Renee Claire Bergeron said "you should pull it back out," and there was an informal reading of it and one of the actors who is now playing the father in the play (Neal Lerner) submitted it to the Fringe, the play got in, I got hired and we did auditions, selected our cast and here we are four months later.  In the midst of that we had a couple of rewrites, met with actors a couple weeks before rehearsals and did more rewrites tightening dialogue and  jokes.  The actors have been a huge part of this, we're really excited about how natural the play feels and so much of it is because the actors have had a say in the voice of their characters, really making sure they were all three dimensional humans.  They talk like people even at their most poetic and heightened, everything that comes out of these characters mouths, we believe it. It's been really great, a fun and open room where everyone has a voice. 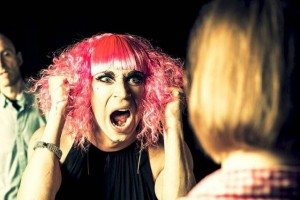 RD: Drag Queen Helen Back (aka Joey Pollack) is very much like winner Bianca Del Rio from RuPaul's Drag Race, she's able to kill you with a smile, very snappy, New York quick and hilarious in that way.

SB: Do you have a hashtag for this show?

RD: #NucleurFamilyMeltdown A lighting bolt that then destroys everything in its path.  It hits you out of nowhere.  It's a perfect Mother's Day and in an instant everything goes wrong.  There is something great about a play about gay people that's not about them being gay.  We're presenting people as people and not broken victims.  There is something to be proud about putting a three-dimensional drag queen on stage.

Performances of Mother's Day continue at the Players Theatre through August 24 as part of the New York International Fringe Festival.  For more on FringeNYC shows, click here.

Playing through August 24th at The Players Theatre.