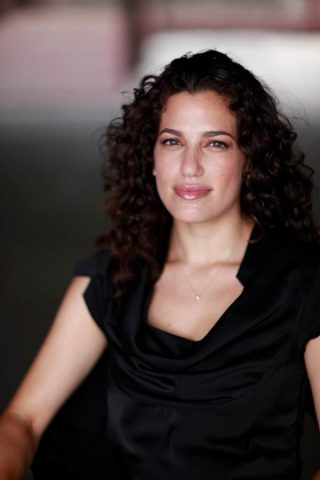 The Anthropologists Save The World! is a dark comedy about climate change. It’s an evening of three plays created from found text, source material, improvisation and original writing. Each of them has been created through a devising process (in 2012 and 2017). Our goal was to dig our heels into the question: Does what we do as individuals really matter? The result is part screwball comedy, part nihilism and dash of good old American bravado.

Building our epilogue, The Robot, has been particularly gratifying. We’ve created this piece together from scratch with a cast of ten plus our creative and design team. Everyone has been so generous, really embracing the “yes, and” philosophy. The ensemble is made of up company members and actors who have been collaborating and devising with us for many years plus actors who are new to us and/or new to devising. It’s exciting to see how our methodology gets shared and embraced by the team. We’re also experimenting with new ways of storytelling, like using text that’s been generated by both humans and Artificial Intelligence. So that’s terrifying and exciting at the same time. That’s usually how we like things at The Anthropologists. Also, these people are making me laugh. A LOT.

“By the twitching of my thumbs, something wicked this way comes.” It’s just so delicious.

I’d like to see a greater contrast between stage and television. And television has SO MANY great shows right now. As a parent to two young children, I’m at home a lot more than I ever was before and so television has now become a bigger part of my entertainment. When I go to the theatre I want to be wowed by the stagecraft or the storytelling style. Show me something that will make my jaw drop!

Extremely important. For me, this is what it’s all about. My personal activism is through theatre and trying to tell stories that will motivate people to take a closer look at their own lives or habits and make a change. Creating these plays - and engaging in the research it takes to make them - has certainly changed my own life. By the same token, I know that I personally need to have an out, a way to escape when it all feels too real or overwhelming. So I hope that I can provide that as well.

Review: ‘The Anthropologists Save the World!’ at Ice Factory 2017

As I digest the play The Anthropologists Save the World! by the theater collaborative The Anthropologists and directed by company founder Melissa Moschitto, the challenge of art making is crystallized. A piece of theater needs more than just the belief itself — it needs an original idea, or the sense of an original idea, or, well, at least some investigation of an original belief. Without it, a play will feel TV-caricatured and get tired very quickly, despite stemming from a genuine purpose. The Anthropologists sets up two situations: Aldous Huxley monitoring a quit-smoking group, and a band of survivalists living through a doomsday scenario in New York City. This is set up into two sections, each with very bare design ideas. The dialogue feels improvised, notwithstanding a few specific monologues. The play wants to be about the paradox of humans as an insensible parasite, our host being our slowly deteriorating planet, and our mockable and ultimately selfish attempts at change. All of those ideas are abundantly clear, because simple ideas are simply communicable through text and plain stage images. What’s not there is an investigation of that belief, a feeling about that belief th …Read more