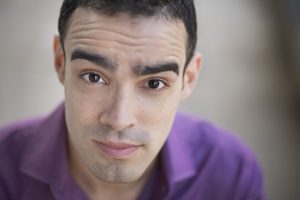 Ricardo Pérez González is a recent MFA graduate from NYU Tisch and has a true handle on this thing called writing.  He's been raking in accolades -- from being raved about by the New York Times, to participating in the prestigious Sundance Institute's Inaugrual Writer's Intensive, to winning the Alfred P. Sloan Grant. This young playwright is a founding member of The Dreamscape Theatre and company member of Big Apple Playback.  His writing credits include "Inside Out" (commissioned by Pregones to address anti-gay bullying), "WWI Christmas Truce in Fields Where They Lay", and his transgender family drama "La casa de Ocaso".

After watching a matinee performance of his memorable play "Ashé", produced by UP Theater, I sat down with Pérez González to talk about the play, his personal influences, and his advice for all writers.

StageBuddy: Who are some of your influences?

Ricardo Pérez González: I'm heavily influenced by Lorca; I actually include a reference to him in all of my plays.  Lorca, in particular, because he's so big, and his women are phenomenal, and he's so queer without being blatant.  Tennessee Williams -- I'm real old school.  I love so many contemporary playwrights, but in terms of what influences me, Tennessee Williams' stage directions were a play in and of themselves; and in the back of my body somewhere, when I write I let myself be a little Tennessee with my purple prose.  People like Rebecca Gilman and Sarah Kane.

When did you know you were a writer?

I used to write stories as a little kid, these stories about mythology and this cyclops.  My first story was this cyclops who was looking for home and had to build a raft to find the other cyclops again -- and it was this little crappy piece I wrote.  I was probably 6.  It was always a piece of me, always personal, but I wound up being an actor in college and after.  And I still act -- it's a piece of me and I love the storytelling element of it -- but the thing I wound up doing mostly as an actor was making up stories about my character.

I remember doing a short by Tony Kushner, "Six Playwrights Bury a Seventh", which is the subtitle [of Kushner's "Reverse Transcription: Six Playwrights Bury a Seventh, A Ten-Minute Play That's Nearly Twenty Minutes Long"]; I was the playwright who brought everyone together.  And shortly after that I was approached by the Dreamscape Theater -- this wonderful director Brad Raimondo who wanted to do a play about the World War Christmas Truce. I'd worked as an actor with him, and we did some work together -- and it was kinda uneven. It was a rewarding process, but the product?  Not so much.  And I just said to him in his living room, casually, "I would love to be a part of this, part of devising this -- but we need editorial oversight, and we need a writer, and I want to be that writer. I would love to be that writer."  He didn't really know my writing, but he said, "O.K."  We wound up staging it ["WWI Christmas Truce in Fields Where They Lay"], doing a workshop; The New York Times gave us a great review.  We're remounting it again next year. 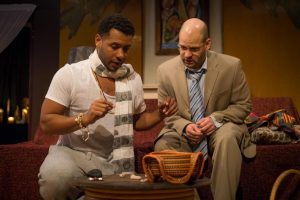 That was four years ago.  I had never written a play before, and I just remember being in the audience and watching those actors on stage and thinking: 'I'm not jealous of them.' I had kind of a rough relationship with one of them; he kinda reminded me of myself in a lot of ways -- in the way that we actors think we're such Gods on the stage. But really, it's the playwright standing in the audience who's creating this world.  That was the moment for me: watching the show and knowing I created this.  And everyone else is also creating this -- I'm not belittling collaboration -- but the amount that a playwright can do versus what an actor can do was so revelatory.

Do you have any rituals before you start writing?

I have a few rituals. A lot of them involve showers, a lot of them involve wine.  I've discovered I write really well with other people, around other people.  I have a friend, Lauren Moss, she's a wonderful director and screenwriter; she and I would get on Skype together to talk about things.  Brushing your teeth is a ritual, right? There is a particular way that you do it. And I find that me and her sitting down with some wine and talking -- and we speak very honestly, she's really tough and it works really well -- I find that opens things up for me.  With this process with David [Mendizábal, director of "Ashé"], we'd talk and we'd talk and we'd talk, and he'd say really smart things, and I'd get all jazzed up and want to write.

What was the journey of creating "Ashé"?

It was my thesis piece at NYU.  I was working with this Professor who's great but kind of a hard ass. [He] wouldn't let you get away with bullshit.  And I was thinking of doing some various things, and he kept asking me, "Where are you in these plays?"  I always shied away -- I still shy away -- from things that are really personal because I don't want to be overly indulgent -- I'm from an acting background, and I don't ever want to be writing just to cast myself so I steer away from it.  But he kinda called me out on that; he was really good about redirecting and saying, "It's going to be personal no matter the material."

I started thinking about my beliefs and my belief system and my life and identity and belonging and where I fit in the world; and all of these pictures started coming up; these splits being caught between my past and my history, feeling like I'm from Puerto Rico even though I wasn't born there (that's where my family is from), being a disbeliever and somehow still believing in faith and spirit -- in the magic of my abuelas.  Both of my abuelas dreamed prophecy, and that was family history; and I believe that even though I don't believe in such things -- so there is this bifurcation in the way I sort of deal with the world -- I also have this deep connection to mythology.

There are all these two brother myths out there, which became this ideal template to fit all of those splits.  Plays about family, love stories, brotherly love.  All of these worked together to create this.

What was your experience like working with UP Theater? 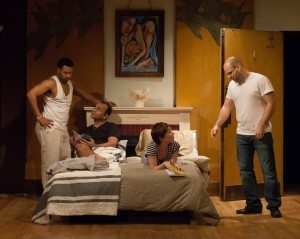 It's actually been fan-fucking-tastic.  I'm just being very blessed and grateful at this time in my life -- and, again, I use the word 'blessed'.  Blessed by what? And I don't really believe in anything external, but I just feel I wrote "Ashé" as my graduate thesis, a director who works with UP came to see it, recommended it and I passed it along -- that was about a year and half ago. They got back to me this past summer and they were so enthusiastic about it and from the get go they were just so opening and inviting.

This is a Latino play that deals with identity and generally the people who make up UP are primarily caucasian, not of Latino descent at all. And there can be that feeling of tokenization or worry about all of these issues that can come up; and they just didn't come up.  From the beginning they wondered who I wanted to direct it; they asked me and were open to the directors, design team.  And I was very clear about needing to cast it with Latinos and actors of color.  They completely ceded so much control and were wonderful producers who were always there.  I was in LA for much of the rehearsal process: from the first Skype meeting we had, I was so relieved because the thoughts James Bosley [Artistic Director of UP Theater] had were right, and the way that he presented them was in a way that could be heard. And it has been consistently that in terms of the notes, in terms of the dramaturgical help they've given; it's helped the piece grow and there has also been a wonderful respect.  And it continues.  UP is reaching out to the community in a way that is so rare.

A writer writes. That's what a writer is.  And I'm lucky to have my work as a playwright produced; I'm lucky to be getting paid for what I do.  I'm lucky, is what it comes down to. If you are disciplined and you're producing work, writing every day or every other day, give yourself credit, just because you're not being paid. I'm always wary of the myth that if you work hard you'll get something. Those things may or may not come -- but you will write something.  If you put in the work you will have created something that was not there and that in and of itself is a beautiful thing and worthwhile. And that has to be enough for you.

That said, if you want that to go further, you have to put it out there.  You have to share it with people and be able to hear 'that wasn't very good'; and you have to know when that might actually be the case.  It's a lovely balance of keeping yourself safe and knowing 'wow, I wrote something that was really self-indulgent -- but I'm 18, that's okay,' or 'I'm 32, this is my first piece, that's okay,' or 'I wrote something really offensive and shit I didn't mean to put that out in the world. But I did it, it's a learning experience.'  All of this rambling advice boils down to one thing: which is to write.  Just fucking write.

Performances of "Ashé" continue through November 23rd.  Check out our listing here for more information: https://stagebuddy.com/listingdetail.php?lid=16090