We talked to Sepideh Moafi about her dual roles in the new musical One Thousand Nights and One Day, as well as her work in The Deuce and Falling Water.

Why did you want to play your characters in One Thousand Nights and One Day?

Both characters in One Thousand Nights & One Day are strong, complex, and intensely human. Their desires and sense of purpose in the world are sometimes at odds with their feelings, but this is what makes them relatable. I am often seduced by characters who are black sheep or underdogs in some way, and have to fight their way to overcome and champion their difficult circumstances. Both Dahna and Scheherezade do exactly this for very different reasons, centuries apart.

What challenges does the stage offer that TV and film don’t?

Both stage and screen offer their own challenges. I think the challenge with stage is to set a show so that it's consistent enough for the sake of lighting, sound, and other technical aspects, while making sure you, as the actor, find the triggers in your work to keep each performance alive. It should feel as if you're discovering each moment for the first time for you and the audience, night after night. The challenge with film/TV work is that you often don’t have rehearsal time, so you basically shoot your rehearsal process (which is actually thrilling most of the time.)

Going from stage to television, are the ways in which you approach playing the character any different?

I don’t really take a different approach to the work, whether it’s stage or film. I think about it as more of a dial. For example, if you are at a party and you’re telling a story to big room of 30 people, the way in which you engage your voice and your body will be different from telling that same story in your living room to your best friend. Your commitment to the story doesn’t change, you just don’t need to fill as much space with your body and voice in your own living room as you would with a big crowd in a big space. Having said that, my approach to my work can vary depending on the role. I always learn as much as I can about the character I am playing based on the information given by the writer. If that’s enough, I’ll build the psychological/physical architecture of the character so that I’ll have a frame to fill once I get in the room with the director and other actors. If I need more, I’ll create a richer backstory based on my research and imagination. It’s all about figuring out and feeling what I need as the actor in order to fully and freely immerse myself into the character and their world with confidence, which allows me to be fully present in each moment.

What excites you most about getting to sing the songs in the show?

Marisa Michelson is a genius. I come from an opera background later pulled into musical theater and jazz, and this is my first time working with a composer who is more interested in authenticity than anything else. She is somehow able to capture the purest form of music that erupts from an experience within our bodies and is never interested in imposing any sort of ideal sound on to the people with whom she collaborates. Her philosophy of music is unique, and it is a privilege to be in the same room with her, let alone bring her music to life! 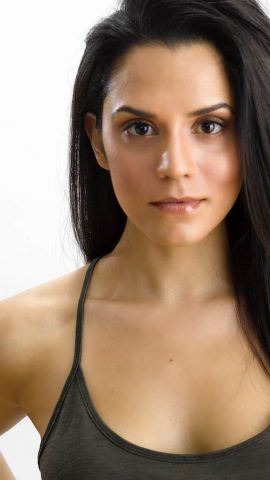 What was your favorite bedtime story as a kid?

My favorite bedtime story as a kid (and now!) is called "Kado Ghelghelezan" it’s an old Persian story about an elderly woman who goes to visit her son and his wife, and meets a big bad wolf who wants to eat her on her way there. She promises the wolf that if he doesn’t eat her now, then she will eat a lot, and get nice and fat so that on her way home, he can eat her and have a better meal. He agrees, and she visits her family and after her visit they make a pumpkin that she can hide in and roll home without being eaten by the wolf. It’s an absurd story, but I would make my mom recite it at least once a night. To be fair, it sounds so much better in Farsi, especially when she is listing all the delicious Persian foods she’s going to eat to get fat.

One Thousand Nights and One Day, like Falling Water, deals very much with the world of dreams. Which of your dreams would you like to turn into a piece of art?

Hmmm, there are so many ideas here, but I have had this recurring dream throughout my life of being on boat in a mystical blue cave that smells of blueberries! I call it my blueberry cave dream. I’d probably expand on that.

In what ways does the violence of the king towards his queens in the show speak to you as a working female actor in 2018?

I had a friend who, when talking about violence, would always say “it’s all about hurt feelings, man.” Simple as it is, I have to agree. Male or female, violence is often triggered by people who feel misunderstood, misrepresented, hurt, wronged, etc. and they don’t know how to express their pain. Unable to express how they feel, they resort to violence. While the original story of The Arabian Nights is undeniable sexist and disturbing in how casually gruesome it can be, it proves this point clearly. Shahriyar is wronged when his wife cheats on him, he doesn't know how to handle the pain, and so he kills her. Killing her doesn’t help his pain, so he turns one murderous act in to a massacre amongst all the women in the kingdom, hoping it will somehow heal his pain. It’s disgustingly preposterous, but his hurt feelings are exactly why he does this. Scheherezade represents the eternal woman throughout time. We’ve always had to come up with an elaborate plan to navigate our paths and live our purpose in a man's world. She does so with such grace, and ends up falling in love with a monster in the process. How much more human can this get? The compassion and love of a woman is boundless.

The Deuce covers similar territory when it comes to men using women to create fantasies for other men. Do you find that you will seek playing parts that cover similar themes? And if so, why does that happen?

Throughout history women have been objectified and fantasized in order to please men, whether it’s for sex or marriage. Both The Deuce and The Arabian Nights share a theme of women who have to use sex and seduction to have power in a world run by men. I’m glad there is now an effort to denormalize this narrative and that more light has been shed on a severely dysfunctional pattern. For this reason, I think pieces like The Deuce and One Thousand Nights & One Day are especially important. I usually gravitate toward shows that I believe in, and roles that I feel I could bring something special to with my desire and ability to humanize a character that may otherwise be judged for being something they may or may not be. All three women (Loretta from The Deuce, Scherherzade and Dahna from One Thousand Nights & One Day) are women who are trapped by their social, economic, political, and cultural circumstances, and are fighting to break out of them. I care more about bringing empathy and understanding to people and their circumstances who may otherwise be looked over rather than what these women represent to other men.

You'll be one of the few actresses of color leading an Off-Broadway musical, can you share your thoughts on the state of diversity in entertainment?

I’m grateful that Off-Broadway and Hollywood are becoming more aware of the historic lack of diversity in entertainment and making an effort to change the narrative here. I still thing we have a long way to go. I wish we did not have to force feed diversity on to the entertainment industry, that it was just the norm, but unfortunately that is not the case right now. Many often think the solution is to create more shows about more ethnic families and sure, that's definitely a solution and I encourage that and tend to help facilitate that in any way I can, but how about we have our stories reflect the real world we live in. I feel connected to my roots but I was not born in Iran, I was born in Germany. I am not an Iranian citizen, I am an American citizen. My story is that of a refugee, immigrant family. Many of my Chinese-American, African-American, Italian-American, etc. friends don’t only belong to stories that involve their respective countries. They are American, and they deserve to play the same 100%, all-American roles that any non-ethnic actor would play. So I vote that we break people's perception of what an “all-American” person looks like on the stage and screen, and hopefully this truth will trickle into how people receive diversity in their day to day lives. And also, nobody is 100% anything. We are all mixed. We should all have our DNA checked.

Do you feel in any way like a role model for younger actresses of color?

I don’t know if I’m qualified to determine whether or not I’m a role model, but I hope that my love and passion for pure truth in art, my work ethic, and my self-made career will give anyone who wants this career the confidence that they can do it for themselves. I come from a working-class family, and I wasn’t really exposed to acting or singing until I was a teenager. I didn’t start singing until I was 15 years old and within a year I had a full scholarship to SF Conservatory of Music. This isn’t because I’m “special.” Rather, I believe it’s because my deep passion and love for the work drove me to find ways to make impossible things happen. When there is no way, you find the way.

Sweeney Todd. There. I said it. And OK, on the more realistic side, Dot from Sunday in the Park with George.