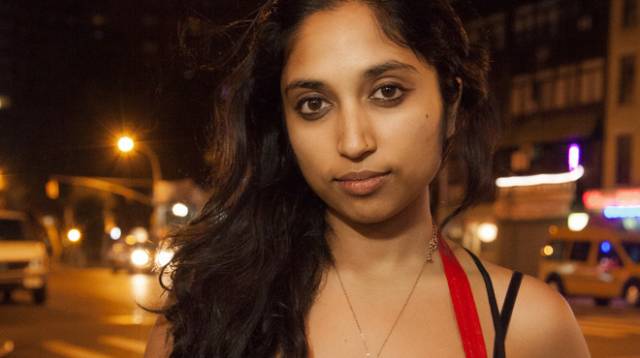 Don't let Subhah Agarwal's baby face or self-described social awkwardness fool you: she is easily one of the funniest and hardest working comics on the scene today. Slowly but surely she's getting the recognition she deserves - last year she was featured on the PBS documentary web-series Modern Comedian - and can be seen performing throughout the city nearly seven days a week. I spoke with her yesterday about New York's comedy scene, open mics, and her long journey to paid gigs.

I watched the  Modern Comedian segment about you, and I have to say I loved their piece about you. How did you feel about it?

I liked it a lot, especially at that time because I didn't really have anything going on career-wise. There's that whole entire bullshit idea that America is a meritocracy. Like, if you work hard you get a ribbon or a medal. And it's not true! So it felt like a bit of a reward for working hard. Like, "Oh, okay, people care!" It was really cool. It was awesome to be on that webseries because [Modern Comedian producer] Scott Moran does an amazing job.

My favorite thing about that piece on you is that they showed you doing the open mics, and it's great material, but those mics are so god-awful. Then they show you with basically the same material at an actual show and you're killing it. Did you actually get that gig out of doing the web series?

Yeah, thankfully. Scott knew some people, so he asked if I could do it and they said yes, and it was awesome. It was such a huge honor to be able to do [Wyatt Cenac's stand-up show] Night Train. It's like this really prestigious show.

How has your career changed in the past year since the webseries came out?

I've gotten management since then and I've started working in a lot of clubs in the city. With Scott, it was almost like I just needed somebody to tell me that I could do better than what I'm doing right now. Because I've been doing it for so long, and I had this misconception of, "Oh, when I'm talented enough someone's going to come and get me." And that's not how it works. You have to go, and you have to hustle, and you have to ask these places for spots. It was to the point that when I walked into the clubs all my friends were already working, so it was very...it wasn't that high of a barrier. It was like, "Why haven't you been working here already?" I just didn't think I was good enough.

And you've been doing these open mics for forever, right? Like ten years at this point?

Seven. I've done them myself, but they were just so awful that I caved. What was your experience of them? You were doing them like seven times a week, how did you stick with it?

When you first start doing them it's hit-and-miss. I started when I was super young, and I was also really bad. So I wasn't getting any laughs, but the first time I was onstage I murdered. And then I bombed for two years after that. Just, literally, like two years of bombing, it was awful, but it's almost like you're chasing that first high, where you know you can do something. The open mic scene is a community. You build connections, and you root for your friends, especially the people you're working with. And as they move up, they take people with them, and you take people with you. I don't know...I just wanted it so badly that I didn't care that I was bombing.

I actually remember seeing you when I was doing mics, and I remember thinking that you seemed undeterred by how shitty the open mic scene was. You were focused and just there to do your thing. How long did it take you to get to that point?

That's so many years.

Yeah. It took me a while to not feel nervous. You're always going to feel shitty in a bad room, but after a while you just kind of know you're funny. And it's like, "OK, this is what this room is. What can I do with this room?" And as bad as the open mics feel, it feels worse to be in front of a crowd of people who paid that just don't want to laugh. Which happens, and you're just like, "What? Why did you come?!"

What are those gigs? Are there specific gigs or clubs you get where you're like, "This is gonna be rough?" and others where you know it's gonna be your bread-and-butter?

You can't necessarily tell ahead of time. I mean, some of them just sound bad. Like, "It's in a banquet hall in the middle of nowhere," is probably gonna suck. A lot of the time when you walk into the room and you see the set up of the room you can tell a show's going to be awful. If the lights aren't really high, and the way people are seated. If they're seated conversationally, like pointed towards themselves versus towards the stage. If there aren't that many people in a very big room, if the sound is messed up. Creating the right atmosphere for comedy is so delicate. It's one of those things where the crowd could overcome those odds, but probably not.

I once had some comic come up to me after a show and tell me I should change my gay material to incorporate more gay sex jokes, and I was like, "I'm not doing that." Do you ever get comics or audience members coming up to you and telling you to change your material?

When I first started I would get a lot of that. It was anything and everything. Now I'll get small tips, like "Try rearranging these words," or something.

Is it people you respect, who have a right to say that, or...?

To an extent. When it's someone I respect I really appreciate it, but a lot of it comes from people who just don't give a shit. A lot of people who don't know anything like to run their mouths, especially because it makes them feel important. A lot of it is just ignoring people. I had someone tell me once I should do more Indian stuff, like I should really ham up the Indian card. Everyone's gonna say everything, just ignore it.

It's funny to hear you say that, because there's the type of comic who's like, "Well if they didn't get the joke, they're dumb," and that's sort of the opposite of your onstage energy, but there is this element of you ignoring negative energy and working with the positive.

I think the entire point of comedy is communicating. It's your job to communicate to them what's funny. If they're not laughing - generally if a comic thinks there's something funny there, there probably is - it's just that you haven't figured out how to say it to them yet. How to make them see what you're seeing. That's all I'm trying to do. Even Chris Rock has that quote - I'm going to misquote this horribly - but there was this interview where they asked him why he thought it took him so long for America to get you, and he said, "It took that long for me to get America."

I was born a coal-miner's daughter, and I remember well the well where we drew water.