November 10, 2015
Theater Feature
Interview: Will Reynolds on the Epistolary Romance “Daddy Long Legs” and the Lost Art of Letter Writing 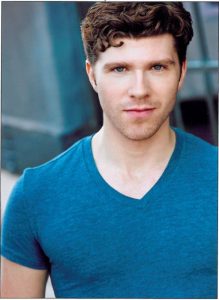 Will Reynolds is living in the now and soaking up all of the joys of his current role -- playing Jervis Pendleton in Daddy Long Legs. Based on the classic and beloved novel, the Off-Broadway musical by Paul Gordon and John Caird documents the relationship between the young Jerusha Abbott (Megan McGinnis) and the mysterious benefactor who is funding her education (Reynolds). The only thanks he asks is a handwritten letter each month, documenting her studies and experiences in school. The two engage in this sweet epistolary relationship for years.

StageBuddy got the chance to speak with Reynolds about his acting, writing and music careers, as well as his experience with Daddy Long Legs. He shares his favorite part about playing Jervis, the beauty of “old-fashioned” communication, and the magical letter that reinforced that he was on the right track.

Will, I had the chance to see you make your debut as Jervis last month and it was a really special night. The authenticity and the exuberance you bring to the role are really inspiring and beautiful to watch. Tell me a little about your background and what got you into performing.

Will Reynolds: Thank you so much! I grew up in the suburbs of Chicago and was really lucky to have really great public school teachers that got my imagination primed for a career in the arts. From there, I participated in community theater in downtown Chicago and was a kid actor at Drury Lane and a wonderful venue called the Candlelight Dinner Playhouse, which unfortunately is now closed. I attended Carnegie Mellon University and received my degree in Acting/Musical Theatre, and from there went on to the national tour of Mamma Mia! Over the past few years, I’ve been involved in a lot of development projects and am very excited to be a part of a lot of new work.

Is there a certain Broadway show you’ve seen that really inspired you or impacted your career?

(Laughs) Well, it would have to be Phantom of the Opera. My mom and my aunt went to see it when I was too young to attend, and brought me back a cassette tape. I didn’t even know what I was listening to at first, but I wore out that tape. I love that it’s centered around the obsession with the theater and is just so good.

Speaking to your current role as Jervis in Daddy Long Legs, can you describe getting your moment as you made your debut in the show and your experience so far.

I came on board as a standby and am such an avid fan of [composer] Paul Gordon. I instantly connected with Paul and his music, and the way he writes his songs and the feelings behind them are exactly the way I want my voice to sound. Now definitely feels like the right time for me to be a part of this show and it’s truly a one-of-a-kind opportunity, sharing the stage with only one other person in this Olympian type of role. My love for the show is huge, and it has been our job to learn the show from the outside in and take its shape and determine how to fill it.

What is your favorite part about taking the stage every night with co-star Megan McGinnis?

Megan has had such an intimate connection with the show over the past six years and has been an integral part of the creative team. She’s so generous and such a joy to play opposite to each night. It has been really special.

The music of the show is so beautiful, is there a certain song you connect with most?

It’s a tough question, because all of the songs offer such different things. I really love “Like Other Girls” because it’s the first time in the show that Megan and I really get in tune. For so much of the show, we don’t even see each other but this is the moment when all of the lights go up and we feel the audience. The song itself is so catchy, so fun and really just a party for everyone in the room. I also really enjoy when Jervis has his moment singing “The Secret of Happiness (Reprise).” It’s really a simple moment when the two are taking in the beauty of the sunset and letting the audience in on a private moment. It’s raw and honest and allows the audience to witness that vulnerability.

What is your favorite part about playing Jervis and do you enjoy the challenge of portraying such a mysterious and layered character?

While it’s such a gift for the audience to witness Jerusha blossom into an intelligent and unique woman, it’s Jervis’s world that gets turned upside down. On the outside, he’s cold, stiff, buttoned-up and has built a world in which he is in complete control. He’s experienced the pain and sadness of loss in his life, and then Jerusha comes along and begins to knock down his walls. She really unlocks his heart -- which is such a joy to experience -- and ultimately is the key to allowing himself to become young again. Also, in the privileged world he comes from, nobody is honest with each other, but she is. He’s allowed to witness beauty, happiness and humor again and it comes as somewhat of a shock to him.

It really is wonderful to see his transformation. Once in a while, a show comes along and reminds audiences of a simpler and more romantic time. In this day and age of technology and texting constantly, letter writing and sending is rare, so it’s a special treat to experience it in the show. What do you think is so beautiful about that practice?

Sitting down to write a letter is really a special practice. It allows us to be present with our thoughts and gives us time to prepare what we want to say and send it to someone we love, while awaiting their anticipated response. As a writer, I love that creative process – writing a first draft, editing, crumpling up the paper, starting over – and enjoy reenacting that on stage. It’s very unique to experience the words in real time as opposed to shooting off a quick [text] message. It’s also really fun for the audiences, as a postcard is enclosed in the program and we give them their chance to write a meaningful note to someone they love.

If you could write a letter to anyone dead or alive and be guaranteed a response, who would it be and why?

In high school, I wrote a letter to Stephen Sondheim with a million questions. He replied with a letter, as well as a cassette tape of him answering all of my questions! His message was so encouraging, letting me know ‘You got this – just keep doing what you’re doing’ and it all came full-circle when I had the chance to work with him. Currently, I’ve been thinking about how I’ve been with my partner for three years and never written a love letter – perhaps I should do that.

Looking to the future, what type of projects do you hope to be a part of? Any dream roles?

The dream for me would be to originate a piece of work. I’ve been working on A Room With A View and would love to see that vision come to life on Broadway. Also, anything that Paul Gordon is attached to – sign me up.

I’ve heard some of your songs such as “Suddenly Autumn” and you’ve also composed songs for the legendary Audra McDonald. How would you describe your personal style? What instruments do you play?

I play the piano, guitar and ukulele, and took some time while at Carnegie Mellon to write for myself as an outlet. I wanted something that was separate from my schoolwork and acting career – something that was all mine. Later on, I was given the opportunity to write for some incredible actors and singers and wrote several songs for Audra that I thought could potentially be a match for her. She really responded to one of the songs, called “Tavern” and it was such a magical moment to see her perform my work live and acknowledge me from the crowd. There really are no words to describe that type of experience.

On of the themes of Daddy Long Legs is to live life in the moment and to live life to the fullest – do you have any words you live by?

I think the words spoken in the show, “The secret of happiness is living in the now. Living in the time it takes to blink” are words I take to heart. It really speaks the truth and highlights the importance of being present with the people in your life and having those special experiences. You need to actually be in the room where it happens, and put down the device.

Daddy Long Legs is currently playing at the Davenport Theatre.