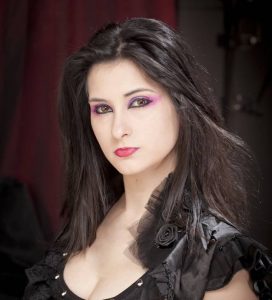 Cabaret is undoubtedly the show that peaked my interest in musical theatre. I have always been attracted to balance and juxtaposition in theatrical productions, and the execution of beautifully staged spectacle contrasting with thought provoking subject matter. Cabaret won me over immediately by feeding the audience a nostalgic sense of razzle dazzle, but never letting us feel safe from the impending threat of what transpired in WWII Germany.

The Lion King, however, is the show that made me actively pursue a career in directing musical theatre. I had a visceral reaction to the profundity of its stagecraft the first time that I saw it. That was when I realized that the platform of musical theatre was truly the place where one's imagination could thrive, no matter how epic in scope. Watching that production as an audience member made me feel empowered as an artist, and like anything was possible.

The Little Mermaid meets Wicked. So much girl power!

Peter Pan's world has been visited so many times, what inspired you to revisit it for your show?

Ordinarily when we are taken to Neverland, it is to show the audience an earlier version of Pan himself, or his posse of Lost Boys. This story focuses on Tinkerbell, who is a character in the Pan-Verse that is often left unexplored. In our Neverland, the focus is on Tink, a sheltered teenager with dreams of adventure and world exploration, who's life is forever altered when she meets James, the worldly, highly educated, dreamy bad boy pirate. Our story beautifully balances the magical wonderment and exciting spectacle of Neverland with the very human motifs of coming of age, personal growth, and falling in love.

Neverland is an imaginary place, how does that open up the space to create the "Neverland sound"?

Our composer, Lena Gabrielle, has done a brilliant job of giving every group of Neverlandians their own signature voice. For example, the fairies get a bit of a twinkling, ethereal sound, whereas the pirates have more of a drinking song/rugby team feel to them. The music is complex but catchy, layering in every groups' individualized musical motifs into the larger choral numbers. It's gorgeous!

NYMF is a great place to develop a show, because there is a fabulous support team built into the infrastructure of the festival. Being part of the NYMF community is a great way to receive feedback on the progress that is being made in pre-production and script development, as well as in the rehearsal room. The goal is to whip your show into shape so that it's ready to live and thrive in the commercial sphere, and can ideally touch as many people as possible.

There has been some extremely encouraging discussion about the future of the show! I am at this time sworn to secrecy, but be on the look out for some very exciting news to come!