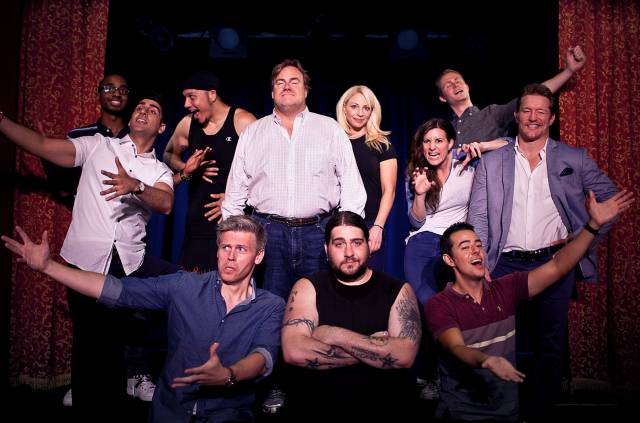 You ever been curious about what happens behind the scenes in the world of stand-up comedians? Ever wondered how some of them are so flipping funny, or whether there's something they're all taking to make them the life of the party?  Well, you might not learn all their secrets, but you'll definitely by weeping with laughter by the end of HA! The Musical.

StageBuddy caught up with Wendth to talk about her choices in casting, her personal opinion on what's funny and the difference between writing for television and theater.

StageBuddy: Please tell us about Ha! The Musical.

Michelle Wendth: It's a musical about stand-up comedians, performed by stand-up comedians.  It's an exposition of the world they live in, more specifically the archetypes like the host, shock comic or headliner and some of the things that make them up as people, why they came to it and how they are in relationships.

SB: How'd you cast this project?

MW: I spent fall through winter going to every show possible in New York -- The Cellar, The Stand, Gotham, any comedy show out there about 2 or 3 nights a week.  And I would make notations about people I liked and then see them again and approach them after their set.  I have two people from LA.  I really wanted to cast everything local in NY but I saw a show at the Improv in LA and saw Kevin Farley there and said screw it, I'll bring him in.

SB: In your search, what made one comedian stand out over another?

MW: The ones I thought had the most presence and made me laugh the most.  It was personal opinion.  I watched their temperament and stage presence.  I needed people with big personalities.  Christian Finnegan and Bill Dawes are big personalities.

SB: What can audiences expect to learn about stand-up comedians and the behind the scenes world?

MW: [joking] They can learn whether or not some of them can sing.

SB: What makes something funny?

MW: I think something that's real, not forced and something that is more of an observation.  I don't really personally laugh at things forced by an artist, more observational comedy and [comedians who] have a bit of sarcasm to them.  It's all subjective.  For me it needs to be a little more mental and sarcastic.

SB: Any funny stories from rehearsal?

MW: Every time I watch these guys singing it proves to be the funniest part for me.  Watching some of them perform, it's not their wheel house to be singers and dancers.

SB: Is there a difference between writing for television than for film?

MW: In live theater you have to be aware of the fact that people don't have that barrier.  You have to be careful it's not overwritten.  It's live and there is no distance between the dialogue on stage.

SB: Any advice for producers to the stage?

MW: Focus is key, having a realistic project is key.  Having a clear vision and patience with the process.  You have to be patient.  Things move faster in television.  Theater is a slow burn.  You have to be positive and stay focused.

Performances of HA! The Musical continue through August 2-7. For more information, click here.

Performances of HA! The Musical run August 2-7 at Stage 72.