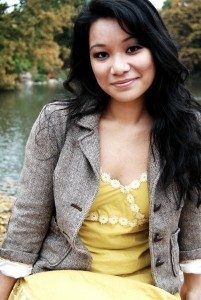 Iliana Inocencio has been rocking the character and improv circuit at People’s Improv Theatre, and has also appeared on MTV Girl Code, Gossip Girl, various PIT TV sketches and the NBC Diversity Showcase. You can catch her solo show Iliana Night Live, an SNL parody, at The PIT's SOLOCOM festival on Saturday, November 15 -- but before you rush to see her perform, get to know her a little bit better below.

How long have you been performing and what inspired you to?

I knew I wanted to perform when I saw my brother's high school production of Joseph and the Amazing Technicolor Dreamcoat when I was about 6 or 7. My brother looked like he was having so much fun and I wanted to be a part of it SO bad. Unfortunately, it took me most of my life to outgrow being an introvert, so I didn't seriously consider actually performing as a career until senior year of high school. I was a late bloomer. Although, I'd say I'm still an introvert, I think getting older just helps you mask things a little better. Haha.

Where are you from and what brought you to NY?

I was born and raised in Alexandria, Virginia and I moved to NY to pursue Musical Theater. I felt like I had a decent amount of success regionally and wanted to see if I could make it on the ole Broadway!

While still living in the DC area, my parents were so supportive that they drove me up to NY a few times while I was still in school (on holidays, of course) for open calls and EPAs. I wanted more of that, so midway through college, I transferred to a different school in NY. I was auditioning like crazy my first couple years here. I had some close calls for a couple Broadway shows but nothing ever took, and someone suggested improv classes because I was hungry to be on stage in NY.

So I started improv classes and fell into the awesome comedy world. The comedy world is some of the hardest working, most ambitious people I've ever met and from it learned the importance of creating things yourself, and not waiting for other people to write something for you. So after improv, I started writing characters and sketch comedy. Stand up is the next bullet point on the to-do list.

What is your show about?

My show is a parody of Saturday Night Live.  Although the more I think about it, it's less parody and more an awesome outline for a really fun solo show. Sure, there will be some things I poke fun at like Weekend Update, the Musical Guest element, the iconic opening credits, etc., but honestly, I'm mostly borrowing (stealing) the SNL format we've all come to know. For me, it's more of a fun way to challenge myself to see if I can do something that normally takes a huge team of people to pull off. It's definitely an experimental showcase for me.

How did you come up with this idea?

I'd say after SNL's media whirlwind last year. So many people fought to have SNL hire an African American female cast member for the first time in 6 years. And then they did! After that, I was curious about the stats of other ethnicities on the show, then looked specifically at Asian American women. There have been ZERO Asian American female cast members on the show! ZERO! As someone who's faithfully watched SNL through the years, I was pretty appalled with myself that even I didn't really think about it, or maybe that I allowed myself to accept it? That's not right on my part or anyone's! (Side note: Lucy Liu hosted once but that's the closest.) So since then, that's been at the forefront of my mind.

This all sounds so serious...so I'd like to add that I also got the idea because I want to have fun! But I'd be lying if I didn't say that perhaps this show is to get the conversation started to get the first Asian-American female cast member on SNL...

What else would you like our readers to know?

I'm sharing the hour with Angel Yau, who's ALSO doing an SNL parody show. We were friends before we were paired together but neither of us had ANY idea that we both pitched SNL shows. She happens to be of Chinese descent, so I think it's particularly interesting that two ladies of Asian heritage felt the need to do an SNL show. Perhaps we're BOTH trying to send a message to SNL?! (Hullo, Lorne. Hi Hi!) I don't know! Either way, she's hilarious and I have no idea what she's doing for it. So if you come to our hour, you can bet you'll see two very different ladies do two very different things to the SNL format. I know I'm excited.

On top of that, just see all the shows at SOLOcom! Every single one of them sounds so cool. It'll be amazing to see what stories will be shared at SOLOcom.  Peter and Toby have curated a bunch of talented people to partake this year and I'm so thrilled/honored to be a part of it. AH! I've said way too much. Just see all the shows.