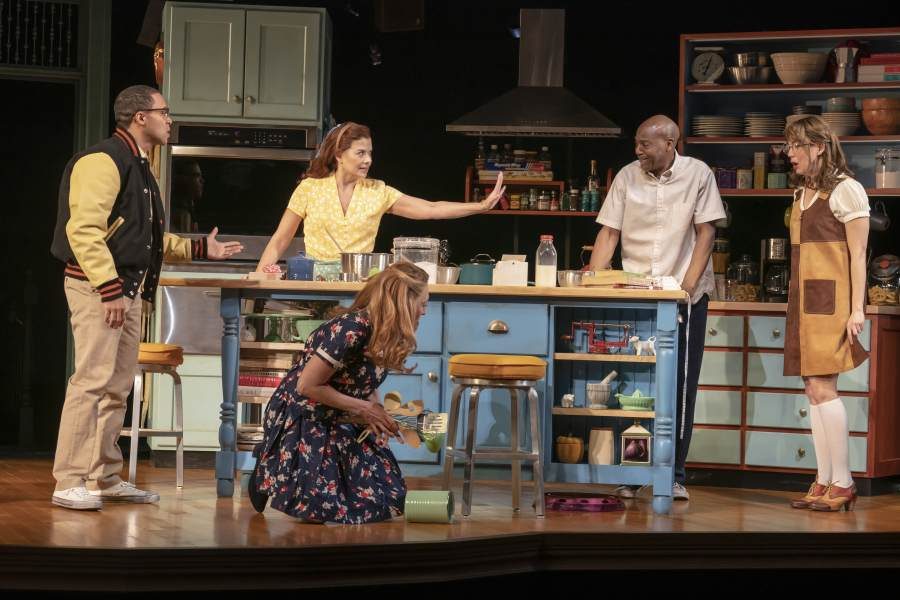 Food is often the centerpiece of family holidays and celebrations. In “Birthday Candles”, the new play presented by the Roundabout Theatre Company at the American Airlines Theatre, the special food is a traditional birthday cake. It’s recipe has been handed down through generations and the play opens with Ernestine’s mother teaching her how to bake the cake,

Played by Debra Messing, Ernestine remains on stage for the entire 90 minutes of the play. When the story begins, she is a 17 year old, baking with her mother. The cake becomes particularly significant as her mother instructs Ernestine in making it, noting, “I’d like you to remember something of me.” The characters actually mix and measure the ingredients, and, by the end of the play, the aroma of freshly baked cake wafts through the theater. The ritual becomes a way to keep the memories of loved ones alive. And the ingredients are special since they include “stardust and the machinery of the cosmos.”

Over the course of the play, Ernestine ages to 107 years old. The passing of time is highlighted by slight physical changes, milestones like “Welcome college graduate” and the introduction of new, younger characters

All the action centers around Ernestine’s family. In addition, playwright Noah Haidle repeats dialogue to show continuity. The play places emphasis upon traditions and rituals. When Billy, Ernestine’s son, comes home with his girl friend Joan, she brings a gift. She offers Ernestine bottles of nail polish so they can do one another’s nails. Joan used to do manicures with her own recently- deceased mother, so she wishes to create a new ritual with Billy’s mother.

The only actors who play the same role throughout the play are Messing and Enrico Colantonio, who portrays Kenneth, the next door neighbor and persistent suitor. Despite some cumbersome dialogue, Colantonio conveys the persona of a pleasant silly, infatuated young man. The other performers have multiple roles. As time passes, they become grandchildren and spouses.

There’s some humor in the ditzy character of Joan who talks about herself in third person when she gets nervous and in Kenneth’s persistence. Kenneth brings Ernestine a goldfish for her 17tgh birthday, and notes that the fish has a short memory of only 3 seconds The goldfish, or at least, the replacement goldfish, are present in Ernestine’s life throughout the next hundred years. Atman I is replaced over the years and by the conclusion of the play, the only one left with Ernestine is Atman 103.

“Birthday Candles” is about families and how the aspirations of the young are sidelined as responsibilities take precedence. The show reminded me of “Our Town,” tracing the lives of the ordinary lives of ordinary people in a quiet way. Despite the passage of time, there's no sense of the outside world.

The script is filled with profound phrases that disconnect with the mundane lives of the characters. Then there's the goldfish and all his descendents “Three, two ,one” Start agan!

Messing is fine here as she ages without makeup. She is a skilled comedian (TV’s “Will and Grace”) and has also shown herself to be a fine stage actress. (“Outside Mullingar”) but this show doesn't give her the opportunity to show off her talents.

Although the show is short, it still feels twenty minutes too long. There’s a great deal of repetition and Haidle puts too much effort into being lyrical. Then everything is repeated, at least twice so it feels like deja vu. Lucky for the goldfish-he forgets after three seconds.

POTUS
The Minutes
Take Me Out
The Music Man