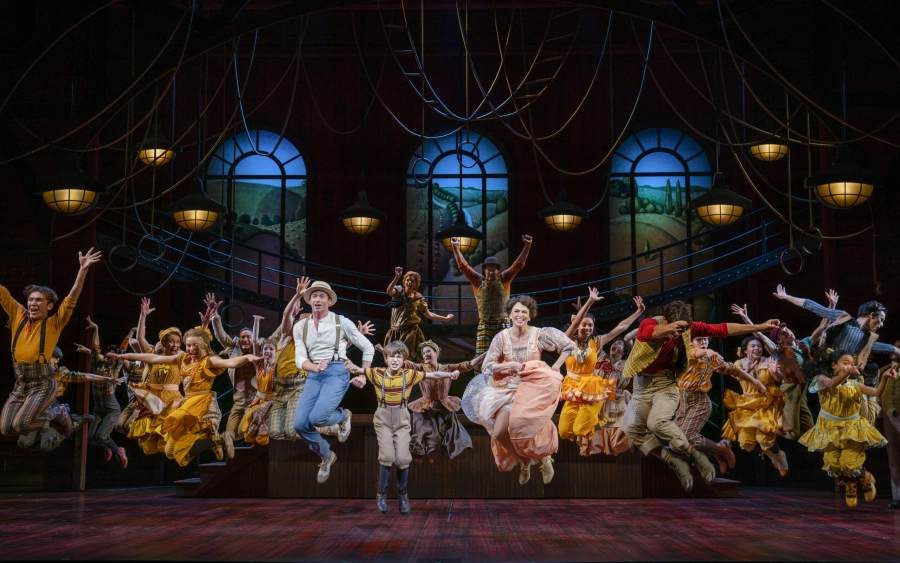 When was the last time you smiled for two hours? Were you wearing a mask? Under their masks, audiences at the Winter Garden Theater are grinning broadly eight times a week.

Despite any criticism you've heard about the lack of innovation or creativity in the latest version of “The Music Man,” this production is joyous fun for the whole family, a rarity on Broadway. Except for color-conscious casting, there are few imperceptible changes made to the show. A flimflam artist, Professor Harold Hill (Hugh Jackman) travels to small towns and convinces parents to buy instruments and uniforms for a boys’ band. After promising to instruct the youngsters and getting payments for the instruments and the uniforms, Hill absconds on the next train.However, when he gets to River City, he succumbs to the charms of the town and Marian, the town librarian (Sutton Foster.)

The show hasn’t been modernized for the 21st century. And if it were, would it hold up? Probably not in today’s world of text and email. Hill’s chicanery would be all over the internet. There aren’t many traveling salesmen around anymore and how many young folks hang out in the town library? (The setting for “Marian, the Librarian” a show-stopping ensemble number in the play.)

Forget bringing the story into the 21st century. Forget making political statements and adding relevancy. “The Music Man” concentrates on giving the audience a good time and that’s what it does.

Starring Hugh Jackman and Sutton Foster whose names are as large as the title of the show on the outside marquee, it is a brash, boisterous, colorful musical, one that fills the entire stage and theater. Although both stars have impressive theater credentials, Jackman for“Oklahoma,” “Boy from Oz”) and Foster for“The Drowsy Chaperone,” “Young Frankenstein,” “Shrek the Musical,” many in the audience probably are more familiar with the performers’ screen roles, Foster from TV’s “Younger” and Jackman as Wolverine.

Besides being enormously talented and photogenic, both actors beam onstage. There’s almost no need for spotlights. They also have chemistry. How could Professor Hill and Marian the librarian not fall in love? At one point in our performance, the two began to laugh at something off script, but it made them all the more endearing. We root for Hill even though he’s a no-good scoundrel.

Meredith Wilson’s music is as familiar as apple pie and Americana. So the audience nodded and even hummed along in recognition of “76 Trombones” and “Till There Was You,” the song The Beatles covered.

The show’s creatives are a veritable who’s who of theater. Led by director Jerry Zaks with costume & scenic design by Santo Loquasto and vocal and dance arrangements by David Chase, “The Music Man” boasts a large, energetic, talented cast. The cast is buoyed by experienced performers including Jefferson Mays playing the pompous mayor, Jayne Houdyshel as his officious wife and Shuler Hensley as Hill's con-man friend.

It is a perfect vehicle for kids. I always brought my kids to shows that featured youngsters and the young performers here do some impressive stuff. One of the young stars, Benjamin Pajak is making his Broadway debut as the adorable ‘lisping’ Winthrop, Marian’s introverted brother.

Every few season’s Broadway has a blockbuster- the show with terrific buzz, that becomes the hard-to-get ticket. A few seasons before COVID, it was Bette Midler in “Helly, Dolly,” and then “Hamilton.” Tickets gave you bragging rights.

This season it’s “The Music Man.” The excitement is palpable in the theater before the show begins. After months of darkened theaters and then the temporary closings as crew members got sick, theater feels like a privilege. If you're going back, what better way than with “The Music Man'' and lots of smiling happy faces, on stage and in the audience.