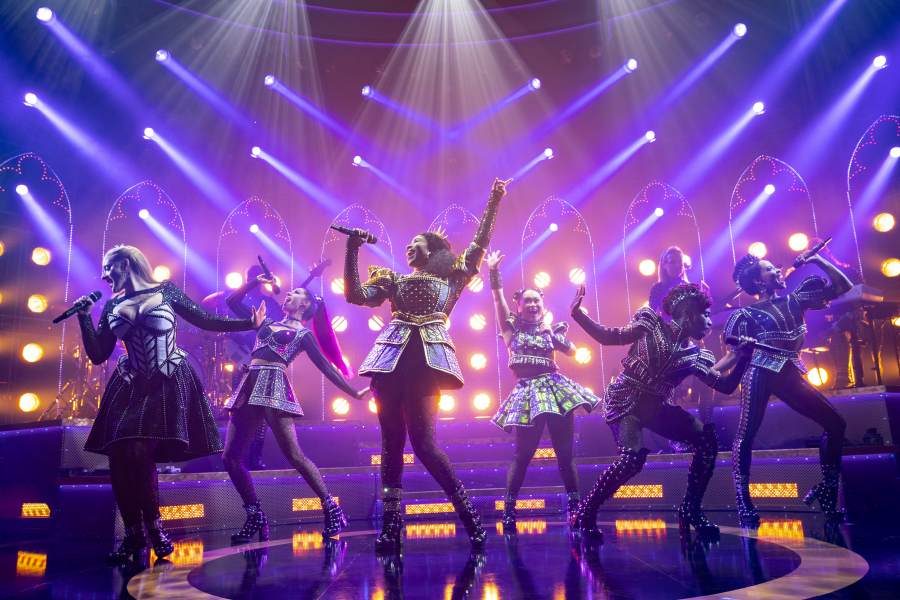 To many,“Six the Musical” was the show that was mere hours away from opening night when Broadway shut down in March 2020. A smash hit in London’s West End, the show had already created buzz and excitement and was sure to win fans in the US.

Except somehow the show managed to generate attention with a series of Youtube videos, some planned, others pirated.

And recently, “Six The Musical” has become one of the first shows as well as the first new musical to open this season. The show has become symbolic of the return of the theater!

The excitement was palpable in the Brooks Atkinson Theatre, an older venue with very close seating. If proximity to strangers still unnerves you, wait a while to see the show- assuming you can get tickets.

Once the show began, it felt more like a rock concert than a Broadway musical. Cast members immediately interacted with the audience. “New York City-How are you doing?” Later one of the Queens invited an audience member to get up and dance at his seat.

Breaking the fourth wall, the performers engendered excitement from the audience, and those older theatergoers unused to a participatory audience may be put off by the reactions. Screaming and cheering, the “Six” audience behaved like friends and family.

But it was fun! Well-worth the wait. (as if we had any choice.)

The six wives of Henry VIII, each very distinctive in her look, musical style and costume, decide to hold a contest to determine who had it the worst and to win the title “The Queen of the Castle.” So they take turns presenting their case.

Having read much of Tudor history, I was familiar with the characters, but many in the audience will know little about Henry’s wives other than the infamous Anne Boleyn (adorably played by Andrea Macasaet.) In fact, the show acknowledges this. “Remember us from PBS?”

Loosely based on history, the show centers around the six women that Henry VIII married. The events, though true, are glossed over and the women each take center stage to win the audience’s affections.

Although the women concede that they are notable because of their husband and not as individuals, the show is definitely an homage to feminism. In addition to its six extremely talented performers, onstage there are the “Ladies in Waiting,” an all-woman band.

The show is an ensemble production and the singer-dancers are on the stage for the entire time. Adrianna Hicks, Andrea Macasaet, Abby Mueller, Brittany Mack, Courtney Mack and Anna Uzele play the Queens and fortunately we weren’t called on to vote. When the performers weren’t featured, they supported each other’s songs.

Read through the Playbill. You will be hard-pressed to find many men involved in the production. However, the many men in the audience roared, laughed and applauded as vigorously as did the women.

Yet by the end, the show moves from History to Herstory. The styles of music are diverse, ranging from rock to rap to ballad. Some of the songs could easily be covered as singles by singers such as Adele and Rhiannon.

Written by Toby Marlow and Lucy Moss who also co-directs with Jamie Armitage, the show manages to inject modern reference and humor through the 80 minutes. Catherine of Aragon, the long-suffering first wife of Henry VIII, sings “No Way” and announces that she is the queen of the castle. Since she “had the most to deal with, and I hit a high C.”

Later the king selected Anna of Cleves as his fourth wife after seeing a portrait of her. (History records that he was disappointed when he actually met her.) On stage, the portraits resemble phone screens being swiped to the left when rejected; Anna’s is swiped to the right.

There are even show references. When Henry falls for Jane Seymour, ‘remembered for being the ‘one he truly loved.” and it's “Suddenly Seymour.”

Although the Queens lived during the 16th century, the costumes sparkle and glitter with futuristic flair. Each is unique (costume design by Gabriella Slade.)

The show is clever, fast-moving and thoroughly delightful. It took a long time to get to Broadway, but “Six The Musical” has arrived in spectacularly regal fashion.