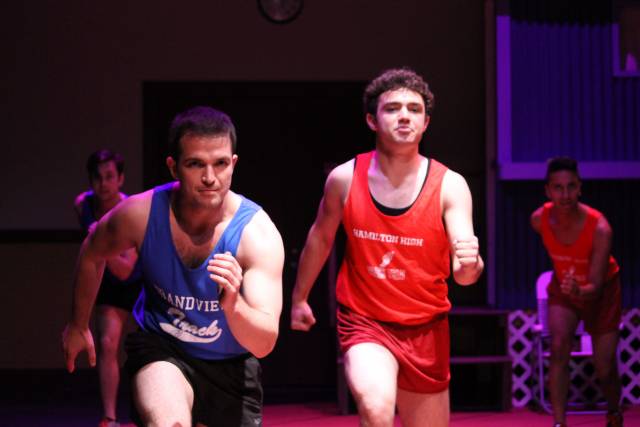 Musicals about sports are as rare as musicals about showbiz are common; perhaps the usually frenetic nature of sports makes them intense enough without the added emotional weight of music, or perhaps musical theatre composers are immune to the appeal of competition through physical activity. In track and field musical Closer Than You Think, there’s even one character in the ensemble (played by the charming James Rose) who in good Baker’s Wife fashion points out he might as well be in the wrong story. Based on the 1990 film Across the Tracks, the musical centers on the explosive relationship between the Davis brothers: Joe (Nathan Winkelstein) is the responsible older son who is working hard to obtain a college scholarship through his achievements as a high school runner. His younger brother Billy (Ashton Corey) is a former delinquent who has just been released from reform school. As luck has it, Billy also happens to be very fast and when he joins the track team in a different high school, he becomes Joe’s biggest rival.

Stories of prodigal sons and sibling rivalries have always made for good drama, the real surprise in Closer Than You Think is showing how track and field can make for compelling musical theatre. Expertly directed by Jessica Bashline, the show makes great use of the space at The Sheen Center’s Black Box Theater. By simply having a segment of a running track painted on the floor (set design by Carlos Aguilar) and using the surrounding balcony to extend its width, the director is able to convey the notion of infinity that comes from standing at the center of a field. Kyle Pleasant’s choreography then helps evoke high velocity simply by slowing the movements down. Pleasant has the ensemble perform a series of calisthenics that make us think of ancient Greek art, in how it put so much emphasis on the beauty and marvels of the human body.

Musical director Bryan Wade leads the orchestra who execute Brett Kristofferson’s sweet score to perfection. In songs like “Nothing is Better” the music often recalls bands like Chicago and Air Supply, while power ballads like “Joey Runs” bring to mind college radio of the 2000s. The score goes for a nostalgic feeling, perhaps to make us think how we would if we ran into Across the Tracks on TV one night. The show’s major weakness falls on the lyrics (also by Kristofferson) which often have obvious rhymes (“Cain and Abel” rhymes with “set the table”), use expletives as a shortcut to convey intense emotions, and in the case of the two brothers feels downright erratic as they each get a big solo number in which for some strange reason they refer to themselves in the third person, Joe sings “Joey Runs”, and Billy does “Billy and the Night”. Corey somehow makes this work thanks to his devilish demeanor and stage presence, but Winkelstein plays Joe as a one note character, whose self-righteousness and determination are only expressed through grunts and frowns.

Overall the ensemble makes the show work despite the inconsistencies of the book, with the superb Corey practically stealing the show, and Meg Pryor as the brothers’ mother Shelly delivering the centerpiece, “Closer”, yet another ballad in the third person, which she pulls off because of the heart she puts into it. As someone who has to see her sons tear each other down, she manages to remain hopeful. Her subtly devastating delivery deserving of a medal of its own.