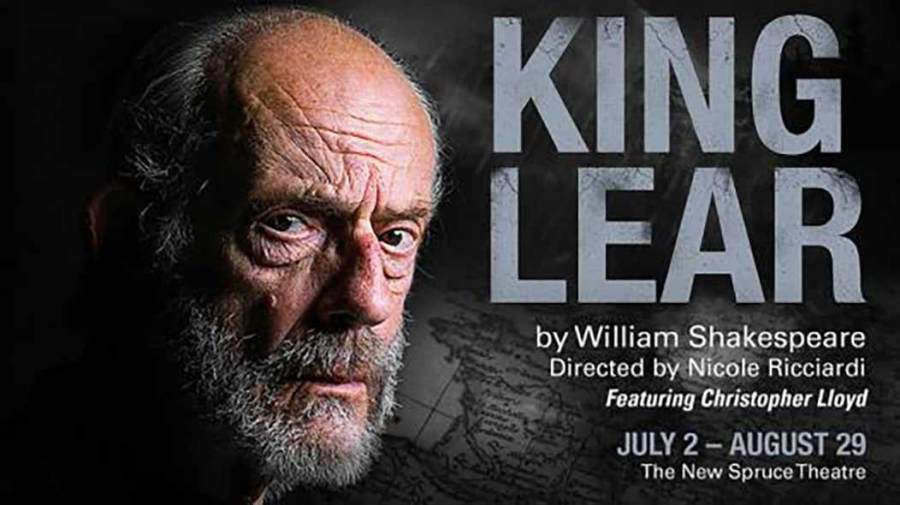 “I don’t remember Christopher Lloyd,” said the woman sitting behind us in the outdoor theater.
“Jim from the TV show Taxi,” we reminded her.
“Oh, the crazy one.”

For some, Lloyd might seem like a strange choice to portray the tragic leading character in Shakespeare’s King Lear. After all, Lloyd is mainly known for kooky comic characters, and many viewers will recognize him as Doc Brown, the distracted professor from the Back to the Future movie trilogy.

Yet the 82 year old boasts a long and illustrious career and has appeared in over two hundred plays, including on and off Broadway. and has won nominations and awards for his serious movie roles including his portrayal of a soulless murderer in an independent film..

I admit that it was Lloyd who drew me to Lenox, Ma to see King Lear at The New Spruce Theatre and I was not disappointed in his performance. He is an exceptionally fine actor and his portrayal is moving and thoughtful. His age adds to the veracity of the play. King Lear is an old man who has moments of senility, even before his final descent into madness. Lloyd demonstrates physical and mental agility and spryness, not typical of elderly men. He handles difficult Shakespearean passages flawlessly. Lloyd is fierce and unrelenting in his anger at Kent, and in his disappointment at his favorite daughter. Later he is pitiful as a demented old man, broken by lies and betrayal.

King Lear is the story of an aging king who destroys his life and family through his own ego. In Act I Lear calls his three daughters before him, bidding them each to declare their love for him and he will reward each with a share of his kingdom. The two older ones, Goneril (MaConnia Chesser) and Regan (Jennie M. Jadow) flatter him with their words of love. Cordelia, his youngest and acknowledged favorite, explains that she loves him as she should. Enraged, Lear casts her out with no dowry. Lear then divides her third of his kingdom between the older daughters. When Kent, the loyal earl speaks up for her, questioning what Lear is doing, the king loses his temper, banishing him.

Now in control of his kingdom, his daughters have no reason to show him loyalty and respect. Irate, he charges out of his daughter's home and winds up in a dangerous storm. Shakespeare uses the motifs of storm and vision. The storm outside mirrors the storm in Lear’s mind as he loses his sanity.

The subplot also deals with father and child. Gloucester has two sons. The treacherous, illegitimate Edmund, resents his brother, and he successfully connives to cheat his brother out of his inheritance and win his father’s title and lands. It is when Gloucester loses his sight that he begins to see clearly.

Although I question some of the casting choices, the main performers were fine. Bryce Michael Wood, as Edmund, is attractive while being vicious and coldblooded. Jonathan Epstein portrays a noble Kent, the epitome of loyalty. Lear banishes him for speaking truthfully, yet he returns in disguise to help his old master.

Several of the cast members have multiple roles, playing in for the smaller parts, and I wish director Nicole Ricciardi had done something to ‘disguise’ them. Change a hat, add a moustache. At one point it seemed like a dead character had returned, and I was momentarily confused by his reappearance, only to realize he was now another noble.

The blinding of Gloucester should have been grotesque and horrifying but in this production it evokes some laughter when Cornwell takes the eye and tosses it away. Then ignited by passion, he and his wife Goneril embrace. When several in the audience laughed, I found it personally jarring and disturbing. The fool (well-played by artistic director Allyn Burrows) has several clever comical lines and that provided enough laughter.

In some instances, the sound system seemed inadequate, especially at the end when Lear, finally reconciled to his beloved daughter Cordelia, cradles her in her death and speaks to her. Some of Lloyd’s dialogue gets lost.

The staging was simple, stark and perfect. Upstage, the amphitheater has a backdrop of eight spruce trees and the slightly elevated stage invites closeness with the audience.

There were two reasons to see King Lear the other night. One was actor Christopher Lloyd and the other was The New Spruce Theatre, an outdoor performance space at Shakespeare & Co.
Neither disappointed; both were awesome.

TRAILER - King Lear | 2021 from Shakespeare and Company on Vimeo. 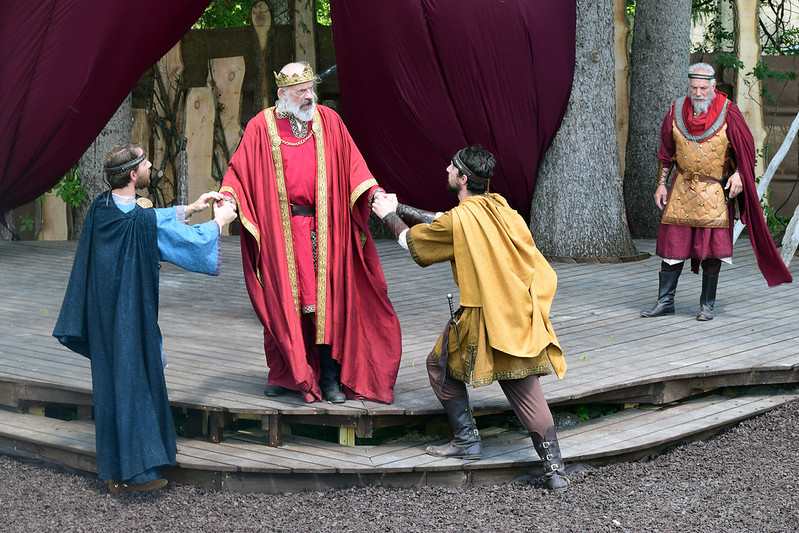 Assassins
The Search for Signs of Intelligent Life in the Un...
Mrs.Warren’s Profession
Fairycakes