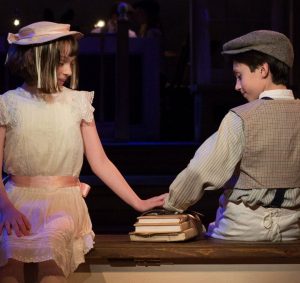 Oscar Hammerstein II has been criticized for his dopey, wide-eyed idealism, from “Oklahoma” to “The Sound of Music.” Love it or hate it, “Allegro” (1947) has moralism—along with camp and charm—coming out the wazoo. The Astoria Performing Arts Center has put together an impeccable revival, helmed by director Tom Wojtunik, capturing the essence of one of Rodgers and Hammerstein’s most ambitious works.

Because the show is revived so seldom (less than 20 times since the original 1947 run), seeing this show at the Good Methodist Church in Astoria was a treat. The choreography by Christine O’Grady is beautifully done; the cast includes some fabulous dancers, and the fantasy ballet scenes were executed stunningly. The cast is brimming with talent; Manna Nichols is especially strong as Emily, singing the show’s best song, “The Gentleman Is a Dope.”

"Allegro" tells the story of a man, Joseph Taylor, Jr. (Mark Banik), from birth to midlife crisis. The first act is a fun bit of musical theater, with tuneful melodies, a lot of dancing, and superb singing. Any quibbles with this production have more to do with the show itself than the production. The second act is noticeably clunky: the title song, while catchy, makes very little sense, and Hammerstein’s worst lyrical tendencies are all at play in the terrible “Yatata,” which tries to mock the dialogue of the rich but ends up sounding nothing like human speech: “Broccoli, hogwash, balderdash … yatata yatata yatata yatata.”

That’s not to say I didn’t like “Allegro”; however, all but the most devoted musical theater fans might want to give it a pass. “Allegro” is not Rodgers and Hammerstein’s best musical (neither is it their worst), but it’s very experimental in an interesting way. It’s also fascinating to see its heavy influence on Stephen Sondheim. Cameron Mackintosh once said that Sondheim had spent his entire career trying to fix Act Two of “Allegro.” Watching the show, it’s easy to see how Sondheim drew from it, especially in “Merrily We Roll Along.”

Through May 17 at The Astoria Performing Arts Center