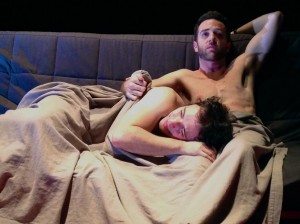 terraNOVA Collective has produced a heart-wrenching drama, "Animals Commit Suicide", by playwright J. Julian Christopher.  This play takes a leap in American Theater by revealing a subculture not too frequently talked about: it intimately shadows a man on the verge, as he painstakingly struggles to become infected with HIV.  With only 40 hours of rehearsal, this artistic team, led by director Jose Zayas, brings this harrowing play to life in a bare bones production that thrives on the actors' sensational abilities as storytellers.

At the beginning of the play, Chance (Charles Andrew Callaghan) anxiously awaits the results of his HIV test in a LGBT clinic; to his displeasure, the test comes back negative.  The clinic worker (Donnetta Lavina Grays) can only watch as he storms off in search of danger.  Chance goes from a gift giver sex party to a HIV positive dating site, from sharing needles and cocaine usage to unprotected sex -- all in an effort to change his status.  The road to destruction seems endless in this self-imposed tragedy.

Charles Andrew Callaghan brings so much vulnerability and honesty to a character confused by his own actions.   His lover, the adorably-named Ethan Sweet (Nic Grelli), is earnest and sincere, lacking a filter from their very first date.  It's a love story destined for failure, yet Christopher carves out their tale so well that you want the two of them to find what they're yearning for.  Sandor Juan is also great as Sebastian, the misused friend, an anchor forgotten in the storm. Unrequited love is hard to swallow but, it turns out, unrequited friendship digs even deeper.

Zayas uses the space intelligently and makes the play's transitions seamless and efficient.  He allows you to suck in that last breath of air in the scene, giving the audience an opportunity to check in with their own emotional center before moving on.  David Margolin Lawson, the sound designer, conveys each mood and environment of the play perfectly.  The decision to cut the music abruptly, right at the top of scenes, is a good one: it's an exhale back into the world.

"Animals Commit Suicide" is a dark play exploring depression and self destruction with the right amount of comedy sprinkled to serve as a play that's both entertaining and enlightening.