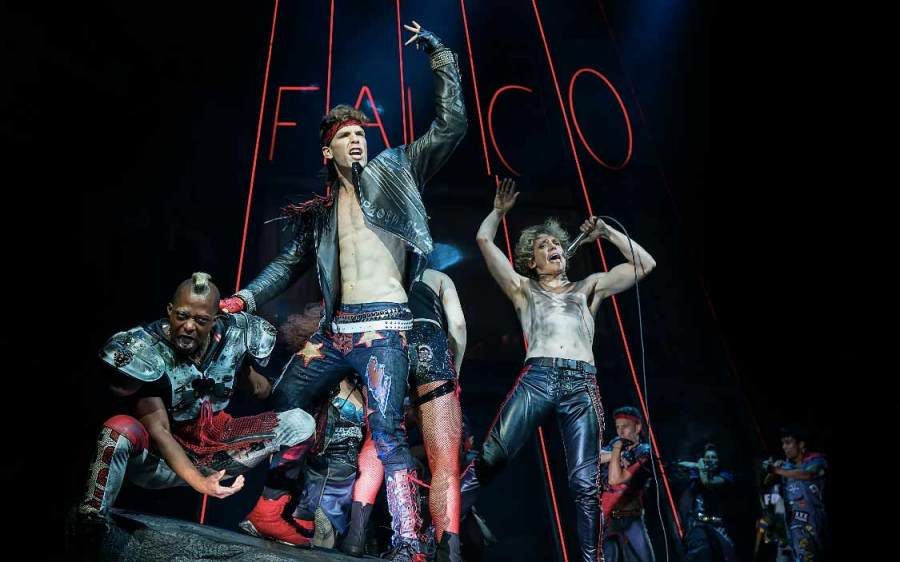 The same can be said of Broadway musicals. If the music is great do you really need strobe lights, confetti and swinging chandeliers? Such is the case with “Bat Out of Hell: The Musical.” Bat Out of Hell was a seminal late 70’s album featuring Meatloaf power singing Jim Steinman’s story-songs.

The music and lyrics are great and have stood the test of time (40 years!) on their own (via albums, CD’s and radio). Why clutter everything with all the extras when most of the people at New York City Center were there for the music?

The typical jukebox musical needs a story to pull everything together. Steinman (book, music and lyrics) uses a takeoff on the classic Peter Pan story to connect his songs. In what appears to be a dystopian world of the future, there’s a group of “lost” young people who are frozen at age 18. Strat (Andrew Polec) is their leader, their Peter. His Wendy is Raven (Christina Bennington,) the 18-year-old daughter of the powerful, wealthy Falco (Bradley Dean.) Raven yearns for freedom and feels repressed. Falco has armed guards and will use any force necessary to keep the “Freezers” as he calls them, away from his daughter. Raven’s parents’ marriage is falling apart, and her alcoholic mother Sloane, (the wonderful Lena Hall) misses her own youth, epitomized by her leather jacket that she gives her daughter.

Raven and Strat run off and Falco and his guards follow. By the end, when the young lovers finally can be together, Raven realizes that there’s a problem because Strat will never age. He will stay 18 forever and she worries about what it will be like when she’s 38, 48, 49. Although that’s never resolved, he promises that he will always love her and sings “I’d Do Anything for Love (But I Won’t Do That),” winning her over.

Some of Steinmsan’s classic pieces are lengthy, but the songs, even the good ones, go on much too long. Under the direction of Jay Scheib, “BOOH: The Musical” runs 2 hours and 40 minutes, which isat least 30 minutes too long. One of the best numbers, “Paradise by the Dashboard Light,” enacted and sung by Hall and Dean, loses the last minutes of a great rendition of the song, when, in a fit of anger, Raven tosses the car’s engine into the orchestra pit. The audience doesn’t even get to applaud the song. Instead the moment is replaced by a humorous bit which easily could have been saved for a bit later, or even eliminated altogether.

The cast is talented and the performers have terrific, powerful voices. Tyrick Wiltez Jones and Danielle Steers sing a good version of “Two Out of Three Ain’t Bad.” It’s easily one of the best in the show, in part because it’s presented simply.

The sound is extraordinarily loud and, for some inexplicable reason, the action in Raven’s upstairs room is videoed simultaneously. The audience watches as the camera woman follows Raven and Sloan around. Some of the camera shots merely magnify the characters’ faces, sometimes distracting from the action going on in the ‘street.”

The music is good (especially if you are a Steinman /Meatloaf fan) The show features all his songs and even a couple more readily associated with others like Celine Dion and Air Supply. The voices are great and the energy and talents of the cast are fine and they work so hard, so why detract from it with so many special effects?

The live video screen is one more gimmick, an overused distraction that takes away from the music. Like the confetti, like the strobe lights and the smoke, they serve little purpose.

At intermission the gal in the aisle over from us sat up with a strained grin on her face. Was she enjoying it or had she thought of something funny? (strange since Strat was lying bloodied on the ground.) She never returned for the second half of the show. Maybe like the extras on the ice cream sundae, all the gimmicks and unnecessary stuff were too much for her. I know they were for me.