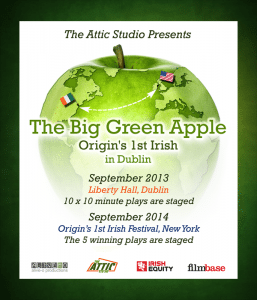 Origin Theater's 1st Irish Festival's The Big Green Apple features five 10-minute plays written by finalists from Ireland debuting in New York City.  The plays are centered around the theme given to the writers, "With Love From..."

Each short play touches on various topics: death, love, marriage, strangers, friendship, ambition and regret.  Til The Ocean is Hung Out to Dry by Paul Kennedy centers around a pugnacious couple who host a stoic Irishman.  Waiting for Ebbets by Aisling McLaughlin delves into issues surrounding immigration as three NY construction workers of different nationalities sit on a crossbeam in the 1930s. Kitchen by Orla McGovern tackles drinking and destruction within a family. In Where Have All The Roses Gone by Karl O'Neil, a smart, retired English teacher and a hot-mess American bond over Shakespeare and more. Each writer impressively fits complex characters and rich emotion into a ten minute time span.

Six actors make up the cast, Sean Mahon, Rachael Jenison, Jerzy Gwiazdowski, Reuben Barksy, Orlagh Cassidy and Penny O'Brien. Each gives a resplendent performance, although Irish accents do peek out a time or two behind American ones. Henning Hegland's directing is quite luminous as well; each scene is rich without any props or scenery but boxes.

In true Irish tradition, many of the stories are darkly humorous - especially Jane Mulcahy's After the Eulogy, which follows two (out of four) ex-wives of the philandering, corporate hotshot Gerald Fitzgerald, who meet at his funeral and are introduced to a sleek, smug professional-eulogizer American.  The plays poke fun at America from time to time, but most of the roaring laughter from the audience comes from Irish references that went over my head but amused many.  The show will make you homesick for Ireland, even if you've never been.

For more information on the 1st Irish Festival, visit https://1stirish.org/

Aviva is a graduate of University of Maryland ('13) with a degree in journalism. She has studied theater in London and has worked backstage at the Clarice Smith Center for Performing Arts in College Park, Maryland. When she's not waiting for rush tickets at New World Stages, she can be found writing her blog in Bennett Park, taking ballet or watching Law and Order SVU.