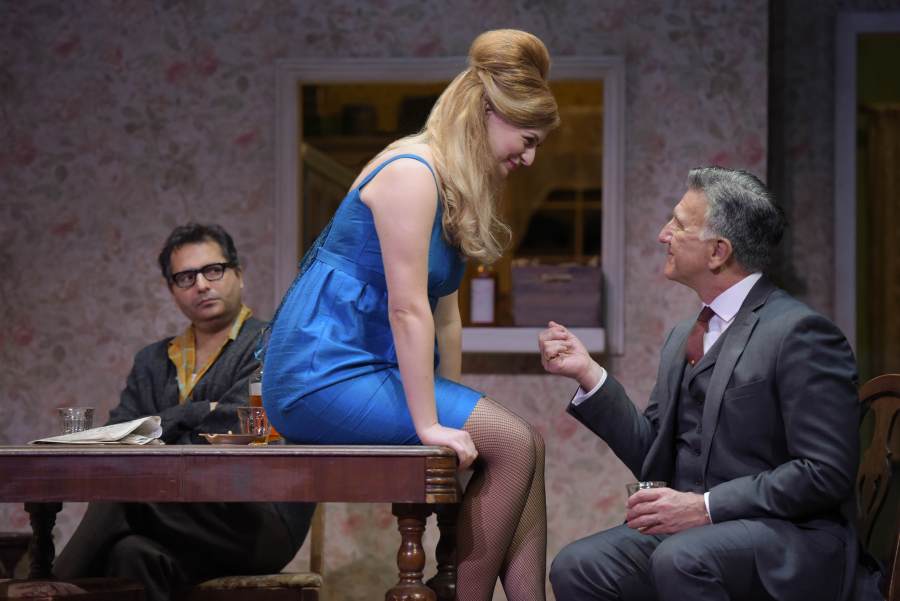 What to do when guests bring the unwanted into your home? Especially when the unwanted is undefinable but very real and visceral, terrifying, yet unnamable. This is the terrain presented to the audience in Harold Pinter’s The Birthday Party, presented at American Conservatory Theater’s Geary Theatre now through February 4th. Director Carey Perloff’s swansong production at San Francisco’s landmark theatre company proves that Pinter’s 1957 seminal play remains relevant as ever in its revelation of the cruelty ever-present in the heart of humanity.

Perloff has assembled a superb cast, featuring Judith Ivey as Meg as the matron of a musty English seaside boardinghouse, Dan Hiatt as her pliant and doddering husband Petey, and Firdous Bamji (channeling John Lovitz) as Stanley, a boarder of uncertain origins. When Scott Wentworth as Goldberg, and Marco Barricelli come to visit, they figure as both very real, yet also metaphorical, threats to Stanley. Metaphorical, as through Pinter’s trademark precise yet open-ended language, words are weapons deployed to subjugate and destroy, yet also resonating beyond the here and now. When Julie Adamo (Lulu) joins the proceedings, Stanley’s birthday party veers into a disruptive mini-bacchanalia, stripping the civilized veneer off society. In the same vein as Eugene Ionesco’s play The Bald Soprano, or Luis Bunuel’s film The Exterminating Angel, Pinter’s one-set play proves to be a kind of pressure cooker. Add characters, turn up the temperature, and see what happens.

Nina Ball’s set evokes the humdrum drabness of this unnamed English coastal town, with worn brown table and chairs in the dowdy communal sitting and dining room, a staircase leading up to Meg and Petey’s, and the boarders’ bedroom, with a door stage right leading to the outside. Above it all hovers a skeletal roof, hanging high above the stage.  The first of the three acts, before Goldberg and McCann arrive, stresses comedy and the almost vaudevillian relationship between Meg and Petey, just like Beckett’s Vladimir and Estragon in Waiting for Godot. Meg similarly evokes Peg in Beckett’s Happy Days as she chipperly pops up in the window to the kitchen, animated by routine and habit. Similarly, at the end of the play, after Goldberg and McCann have left, Meg and Petey slide back into their comedic back-and-forth, overlaying a quiet despair. Perloff cleverly bookends the savagery of Goldberg and McCann’s attack on Stanley for past crimes with these scenes of domestic banality, chaos sandwiched by the quotidian.

Wentworth’s Goldberg (Nate? Simon? Even he isn’t sure) provides the magnetic center of the play, with plenty of resonances in contemporary American society and politics regarding relationships between language, power and gender and, ultimately, the failure of language, its inability to be identical with the thing itself. Wentworth, in a grey three-piece power suit and tie, is all magnanimous business sleaze. He spins yarns and toys with—and sleeps with—Lulu, while showing that his costume of conventional respectability is a fraud. Barricelli’s McCann is hulking and lumpen, a hit-man years beyond his prime, a defeated man tasked with tormenting the similarly beaten Stanley. And it is Bamji’s Stanley who perhaps best sums up the spine of the play and production. Unable to escape past crimes and misdemeanors, trapped in a terrifying present, in the end, he finds himself transfigured into what he tried so desperately to escape.