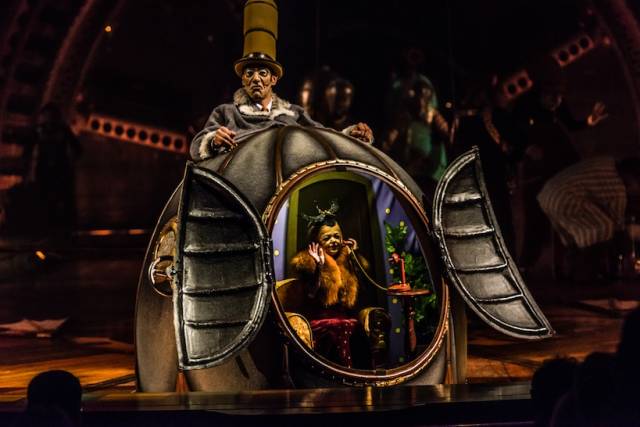 Magic lives inside the space of a theatre. Or in CIrque du Soleil's case, inside the space of their circus tent. Like electricity, magic is always in the air. Just as Nikola Tesla knew how to harness the electricity that invisibly hovers the earth, Kurios director Michel Laprise has harnessed the magic which hovers around the audience in the Cirque du Soleil iconic Grand Chapiteau tent.

It is no coincidence that I use Nikola Tesla's influence on the world to describe Kurios. His heyday, roughly the late 1800s, is the world we are brought into, the age of engineering, aviation and harnessing mystical powers. Laprise and his fellow Kurios designers have truly dug deep into the wonders of this era both in steampunk-influenced costumes/props/music and ambience. Bicycle riders fly through the air, brightly colored goldfish leap in and out of the ocean (the trampoline). Steam-engine trains are powered by performers, never stagehands and, of course, what makes Cirque so unique: there are no animals in this circus. If you see a lion act, as you will in Kurios, the lion will be invisible but alive through the powers of world-class clowning and brilliant stage movement.

There are no stars in Cirque du Soleil. Every performer or athlete-artist is a member of one massive family of creation. This feeling of brotherly love existing between the cast and crew is palpable to the sensitive audience. In Kurios and other shows, Cirque du Soleil examines the unusual talents and ideas of the performer first and then builds a character and life story around the abilities of the artist-athlete-performer. This is what makes the characters so rich: they come from inside the performer first and then are honed into greatness by Cirque directors.

Because this particular Cirque show is much less story-driven and more theme-driven -- as opposed to the nearly graphic novel Cirque show Ka in Las Vegas, for example -- a higher level of ingenuity is required to hold the attention and imagination of the audience. Job beautifully done. With music emotional enough to lift us up to those puffy rainbow clouds bouncing around the Kurios stage, the audience is left with a faint memory of a lifetime lived long ago, in an enchanted steam-driven factory of dreams.