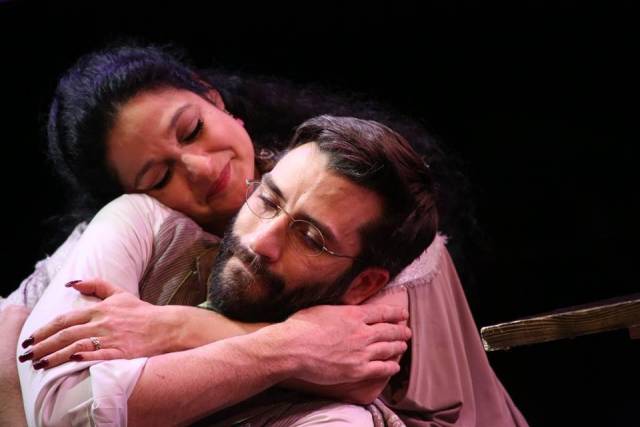 Infrequent yet ominous piano music penetrates a summer retreat, crammed with the accouterments of artistic craft and disharmony. Adolph (Josh Tyson), an artist belittled by a desperate love for his writer wife Tekla (Elise Stone) and the tangled webs spun by the inequality of relationships ("my wife is a very independent woman"), is manipulated by the mysterious but influential Gustav (Craig Smith), an acquaintance well-versed in cunning rhetoric. Implacable and dominant, he burrows deep into Adolph's anxieties. Referring to Tekla's previous marriage, Gustav comments, "She may have married a tyrant but she did it to gain her freedom." Tekla and Adolph's marriage is uneven. She calls him "Little Brother." In a factual statement bursting with implications, Adolph reflects, "She writes me and I sculpt her."

Dependent on his crutch to which he clings with the might of someone who could so easily fall off the edge of the Earth, Adolph grows more perturbed by Gustav's diagnosis of Neurasthenia. His surety in the solidity of his marriage is destabilized. Misogyny and vengeance are as distinguishable as grievous truths. Unaware of the psychological administering at play, Tekla, no stranger to suspicion and falsehoods, returns to be tested by both men.

In Phoenix Theatre Ensemble's Creditors, playing at The Wild Project in tandem with another Phoenix production, The Gambler, David Grieg's updated version of August Strindberg's play upholds the agitated passions and turmoil of the original, but for subtle changes to the expanse of text. Swedish dramatist Strindberg wrote Creditors towards the end of his first marriage, a difficult union that contributed to the abyssal waves of his depression and his quest for meaning in all aspects of life: philosophy, psychology, science, the natural world and the unhappiness that pervaded him. The amplitude of this mental state prevails in every one of Creditors' declarations and revelations.

Under Kevin Confoy's precise, tense direction, actors Craig Smith and Elise Stone, who are amongst the Ensemble's founder members, alongside Josh Tyson, portray neurosis with an undertaking that is both intellectually and viscerally effective. There is a fourth character, The Porter (Sergio Fuenzalida), who enters and exits the stage at the risk of us forgetting him. Encouraged by the merest hint of professional servitude, the part is at the very least desirable for the non-committal silent type. The three leads, however, whether divisive or impassioned, get the better of their audience with the persuasive delivery of credible notions and formidable grudges. Gustav's bid to break man, woman and art are relentless and compelling, as is Adolph's rapid deterioration and Tekla's furtive allure.