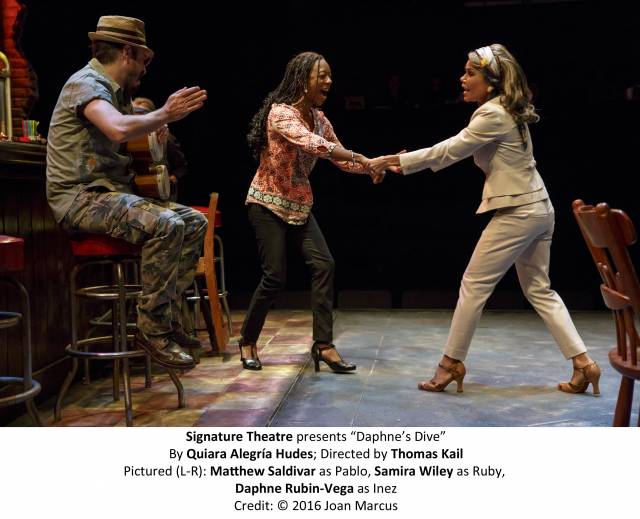 Pulitzer Prize winner Quiara Alegría Hudes’ new work Daphne’s Dive, directed by Thomas Kail, is a testament to the need for diversity in theatre. Set in a bar in Philadelphia frequented by a multicultural set of patrons, the play is a microcosm of the “real America.”

In this modern-day Cheers, the characters come to discuss their joys and sorrows.  The story, episodic in nature, is from the point of view of Ruby, played by Samira Wiley, who many will recognize from her role as Poussey Washington in the Netflix hit Orange is the New Black. Wiley’s performance as the adopted daughter of the bar’s owner Daphne (Vanessa Aspillaga) is intense and passionate. The set, which is a cut-out of a bar, puts the audience on the sides, and for most of the play the action is deliberately not performed for the audience, yet her performance keeps the audience connected throughout. 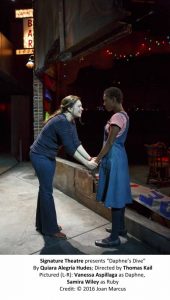 The rest of ensemble is top-notch as well, which is important, given that the play is not an identity play. There is no mention of the struggle for identity, no minority archetypes; rather, the writing explores each character’s story, the struggles and losses, and delves into complicated motivations. The relationships between the patrons are fraught – Inez and Acosta’s rocky marriage, Daphne’s sexual orientation and Ruby’s own struggle with alcoholism. With so many conflicts, Hudes does not always delve deeply into each, but the ensemble rises to the challenge.

Aspillaga’s Daphne is complex and layered, revealed to us gradually by an actor of talent and restraint. Carlos Gomez as the rising political star Acosta is likable and has natural chemistry with Daphne Rubin-Vega, who plays his wife Inez. Bar regulars Rey and Pablo are played with charm and élan by Joseph Weiss and Matt Salvidar. K K Moggie has perhaps the toughest role. She plays Jenn, a character deeply inspired by Kathy Chang(e), who committed suicide by self-immolation as an act of protest on the University of Pennsylvania campus in 1996.

Daphne’s Dive is the second play I have seen this year that features Change and it feels apt that during these turbulent times, her call for ‘transformation’ is being recalled. Hudes’ latest work is an unapologetic and brave look at America becoming.