October 23, 2013
Theater Review
Review: Desdemona: A Play About A Handkerchief 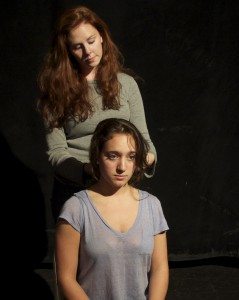 "Desdemona: A Play About a Handkerchief", by Paula Vogel, is Spicy Witch’s sister production to their all-female production of "Othello", both of which are running in rep at the Clemente Soto Velez Center.  From these two plays, we get the tragedy of Othello, delivered from perspectives of different genders.  "Othello" takes the men as its protagonists while "Desdemona" takes the women as the leading forces.

Spicy Witch -- an all-female company dedicated to running contemporary and classical work in rep -- is attempting something wonderful here.  Pitting classical texts against contemporary ones in order to highlight gender and identity issues is a fascinating concept; and Spicy Witch’s dedication to providing women with dynamic, juicy roles usually left to the boys is brilliant and truly important in today’s theater.

But here’s the catch: for Spicy Witch’s idea to work, the modern play in question must be equal to the classic.  Otherwise they are placing incredible works alongside plays that are 'merely' really good, a practice that will unfortunately cause the audience to notice the cracks in the lesser pieces.  Simply put, Vogel’s play doesn’t match up to Shakespeare’s -- not because "Desdemona" isn’t good or Vogel isn’t talented, but because when put up against the monolith of "Othello", it can’t truly compare.  This takes away greatly from Spicy Witch’s intentions; the idea is great, but things get muddled in the execution.

This is compounded by the fact that this particular production lacks excitement.  Regardless of whether or not one thinks this play matches up to Shakespeare’s, no one would argue Vogel’s talent.  In "Desdemona", she breeds a fascinating desire within her heroine, in her need to escape her small Venetian bubble for the world at large.  Desdemona, we find, had hoped to find this means of escape in her new husband.  It’s a wonderful, humanizing idea, and is the bedrock of Vogel’s vision of the Venetian heroine.  Likewise, Vogel takes aim at the cruelty these three women (Desdemona, Emilia, and Bianca) inflict upon one another, spurred along by their growing rivalry.  She goes on to suggest that perhaps this rage and anger would be better focused on the overbearing men that control these women’s lives, rather than on each other.  These bitter machinations slowly turn the women against one another, causing havoc where there should have been sisterhood.

Yet these interesting ideas and themes, well fleshed out, are not given much blood in this production.  The coming murder which lingers over "Desdemona" feels fairly tepid and lukewarm — not because the audience doesn’t know "Othello" well enough to know what is coming, but rather because there isn’t the necessary fire that is needed onstage. Needless to say, much of the dramatic irony the piece might have had is lost.

Still, there are indeed beautiful moments:  the final moment of the play is quite lovely and heartbreaking, and is captured by both performers and designers quite well.  The work of this company is to be admired and followed despite any reservations regarding this particular production, and I look forward to their future work.  Their aims and goals — to make women truly equal players in American theater — are vital and truly important, and should be applauded and supported.