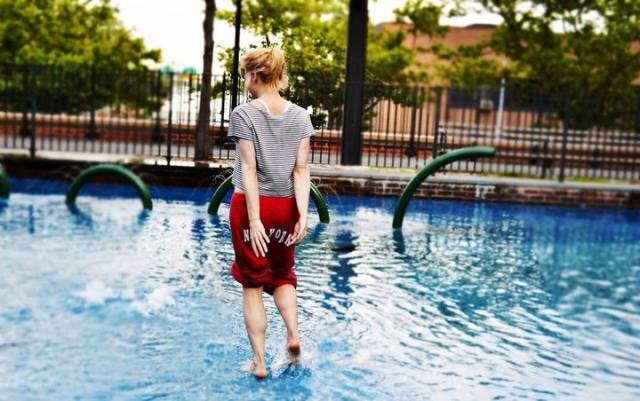 Catherine Boruch gave a highly energetic performance at Stage Left Studios this weekend.  Her short one-woman show, Downtown Mermaid, was a comedic look at life of a Jersey Girl who gets swept up by the big city hype.  From band groupie to corporate tie-chaser, Boruch reflects on her attempts to infiltrate the world of Rockstars and then Corporate America in order to snag the perfect man, whom she believes will be her key to the good life.  While lighthearted and set to a rockin’ soundtrack from her iPhone, the play also delves into the lengths one woman will go to in order to fake it 'til she makes it -- it being a palace with greyhounds or suburban Connecticut, of course.

Boruch’s performance was fantastic as the stereotypical chatty, ditzy blond.  She was colorful and fun even as she worked with minimal stage props.  Instead of sitting in an audience, I felt like I was chatting with that one woman on the bus who talks too much and too fast and will tell you her whole life story even though all you said was “excuse me”.  You know, the one with the messy hair and bright red lipstick on her teeth?

The best part of Boruch’s performance, however, was how she made the audience react to her.  The crowd was largely comprised of women who didn’t know whether to shake her or pat her on the head.  Most were simply aghast that she kept absent-mindedly flashing us because her dress was too short, which I believe was rather intentional on her part.  Besides, what better way to stir the crowd at a festival dedicated to strong female performers than for a middle-aged woman to play a character who is the completely the opposite?

The EstroGenius Festival continues through November 2.