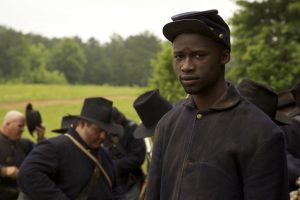 When George Faison of The Faison FireHouse Theater puts on a show, you have to attend.  And when he presents a free production, you need to run to the theater as fast as you can.  On Tuesday, The Tony Award Winner Faison along with the beautiful Cheryl Wills of NY1 emceed a transformative Black History Month celebration, presenting phenomenal dance, poetry, music, and a sneak-preview of Chris Wheeler's new documentary, "Civil War: The Untold Story".

At the event, Wheeler shared short clips from the first four episodes of his remarkable documentary, which examines the lesser known battles of Shiloh, Vicksburg, Chickamauga, and Atlanta in what's now known as the Western Theater. Much better than your typical high school history class, this documentary gave a unique perspective into the conditions of this bloody war. The fifth episode, titled "With Malice Toward None", tells the climatic conclusion to the Civil War by backtracking to the spring of 1864, with the Emancipation Proclamation hanging on the line and raising the stakes for the Union fighters on the field; it culminates in General William Tecumseh Sherman's 100,000-man march across Georgia, effectively drowning out the Confederacy and winning the war.  Wheeler does an amazing job sharing these stories -- found in rare historical memoirs -- with gripping reenactments.  Narrated by the lovely Elizabeth McGovern from Downtown Abbey, this five-year project will have a nation-wide premiere in April on public television.

The evening surrounding these sneak peaks included resounding message of remembrance from whence we've all come.  Cheryl Wills, not only a news anchor, but also the acclaimed author of "Die Free: A Heroic Family Tale", was the perfect host.   Her book is the result of personal research into her family history and the process of tracking down the story of her great-great-great grandfather Sandy Wills, who served in the United States Colored Troops.  The articulate Wills' spends her free time teaching children about her family's role in the Civil War; it was a true pleasure to have a host who was invested fully in the night's commitment to bringing about an awareness of these stories rarely spoken of from the war.

Before the film, Faison's dancers performed the piece "Heartbeat". These talented performers know how to work on any stage, big or small, filling the environment with the life of their movements.  They leap through the air like gazelles and are kinetically connected to one another, as if the ensemble of four were one person.  The choreography was coupled with a spoken word artist, Cynthia Laguerre, whose passion permeated from every syllable and two operatic singers with angelic voices, who transformed the vibrational energy of the audience with every note.  This piece could have easily been the main event; instead, it was the greatest opening to a film screening I've seen to date.

I was entertained, encouraged, and inspired by the performances and the screening.  Wheeler's documentary aims to heal wounds and unite the people of a nation, reminding us all to look to our past as we work to create a better future.