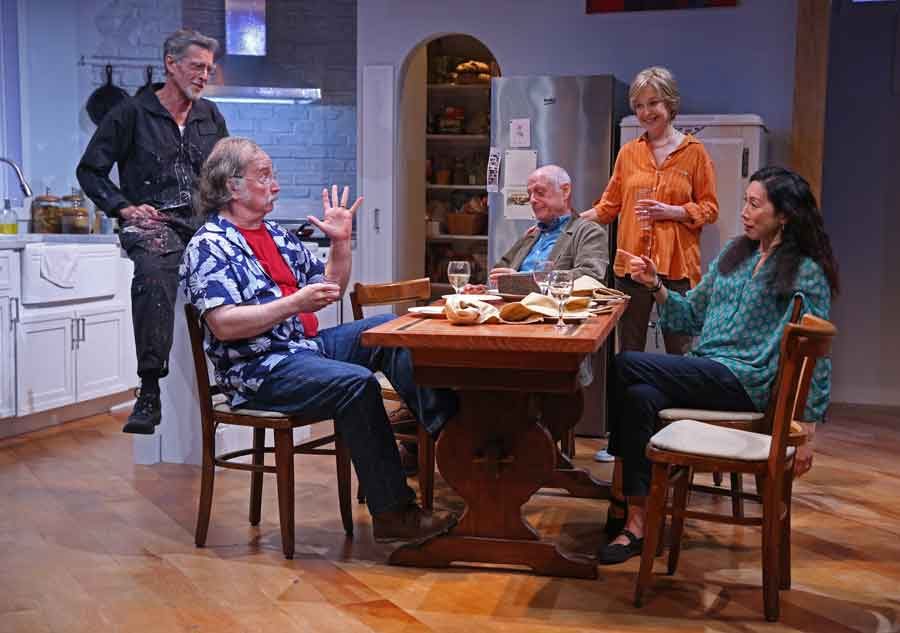 Some plays are age specific and attract a certain demographic. “Fern Hill,” written by actor-playwright Michael Tucker (L.A. Law,) deals with three couples who are long-time friends. They are considering moving into a farm house together to share a sort of communal living. They would care for one another, not be a bother to their children and not die alone - hardly a subject matter that would appeal to 20 or 30-somethings.

The house, owned by Sunny along with her husband Jer, whose names lend themselves to the expected jokes about Sonny and Cher, has long been a meeting place for the six who share a history of friendship. The three men are a decade apart; Vincent is turning 80, Jer is celebrating his 70th birthday and Billy, the youngest, is nearing 60. In actuality, all the actors are in their mid-60’s and above.

John Glover plays Vincent, a painter who will soon celebrate his 80th birthday. As a preview to the benefits of group living, Sunny volunteers their home and care taking for his convalescence when he gets a hip replacement. Mark Lin-Baker, looking like David Crosby, plays Billy, a member of an aging rock and roll band, and is the only performer who brings energy to this lackluster production. Jill Eikenberry (Tucker’s wife) is Sunny and her husband is Jer (Mark Blum (“Mozart in the Jungle).” Rounding out the cast are Ellen Parker as Vincent’s wife and Jodi Long as Michiko.

“Fern Hill” sounds reminiscent of other works. The initial plot is somewhat similar to the well-done 2011 movie “All Together” starring Jane Fonda that focused on an aging group of people who move in together, so that they can take care of one another. At times “Fern Hill,” also the name of the farm, felt like a geriatric “Big Chill” with the characters spending scenes preparing meals, eating and dancing around the kitchen.

The play begins with an interesting idea -a geriatric commune. Then it goes off into other territory, ignoring the promising premise when the first act ends with the revelation that Jer is having an affair. The group takes side, most with Sunny, and then they have an ‘intervention’ with all discussing their sexual experiences. Quite frankly, the scenes of them discussing honesty and intimacy with one another were actually boring. The one good speech comes from Vincent with his distinction between sex and intimacy. “Sex makes you feel like a god … Radiating energy and power… Intimacy is different; it’s about giving up power, which makes it a very human experience “

The actors, all quite skilled, seem too low key and subdued as if they lack energy or interest. The elderly gentleman next to me kept asking his wife to repeat Jill Eikenberry’s dialogue. The performers, all of whom have been impressive in other roles, seem flat and director Nadia Tass should have pushed them for more energy and emotion. In “Fern Hill” the characters didn’t seem to care much, so why should we? The six might ultimately live together but possibly bore each other to death.