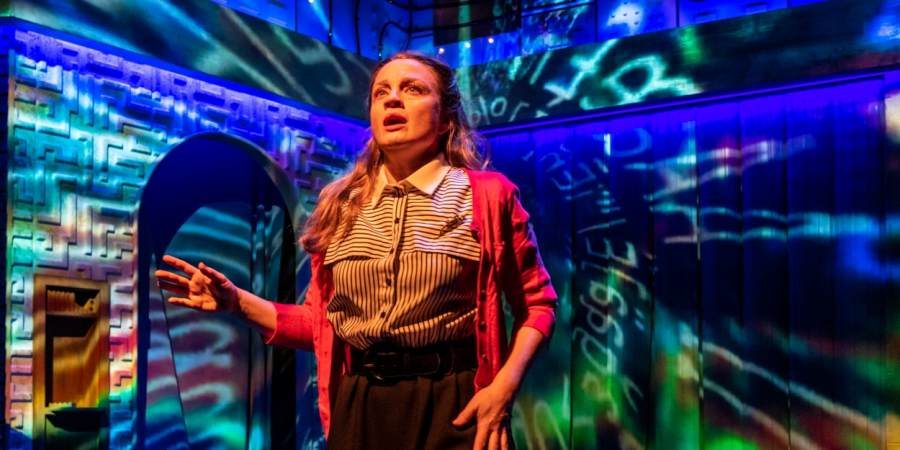 Writers have long been fascinated with time travel. Characters go back in time to try to change things (“Back To The Future.”) and sometimes even meet famous people. Sometimes they go forward to be astounded by future advances (“Kate and Leopold.”) In a love story, a character might even choose to stay in another time rather than lose his new-found love (“Somewhere in Time.” ) In her new Off-Broadway show, “Tech Support,” writer-director Debra Whitfield creates a character who is unhappy in her life and inexplicably finds herself traveling back in time.

Pamela Stark (Margot White) finds her life in shambles. Her marriage has fallen apart and her husband has even faxed over divorce papers. The frustrations of her broken printer seem to be her last straw, so she calls for technical assistance. After being told she is number 267 in the queue, she finally hears the disembodied voice of “Chip,” a remote worker. She confides all her problems to him and when he transfers her call, she ends up going back in time.

During the course of the 80- minute show, she travels to 1919, then to 1946 and finally to the 1970’s. The play is light when she makes cultural references (hand sanitizer) or encounters the ‘modern’ devices of the time (the wireless vacuum cleaner.) The ‘fish out of water’ themes are very common but still could have been more entertaining had the playwright used them more. Instead the show deals with some heavy themes about abortion, women’s rights and women in the workforce. Pam’s interactions with other characters become extremely leaden and preachy. Whitfield also uses the play to make a few passing remarks about the current political situation.

A good actress, White works well with what she is given. Sadly, the others in the cast, each of whom play different roles in each time period, seem less polished and professional.

Off-Broadway theater is often minimal, having little money for special effects and settings, but it can still be exhilarating. Otherwise, the show will resemble a junior high production. When Pam travels in time, she twirls around becoming dizzy before arriving in the new time. Surely Whitfield could have been more creative.

The writer seems to lose her focus in writing “Tech Support.” She begins with a technophobe who is exasperated by modern technology, specifically the lack of personal interaction. It’s an issue with which most of us can identify, yet suddenly heavier themes, like women’s rights emerge. Whitfield tries to cover too much and thus doesn’t develop anything well. Ironically, Pam sells antique books yet no mention is made of Kindle and ebooks.

Does Pam want to escape her life in the present because of the technology or because her marriage has failed? Does she yearn for a slower way of life because of stress or because she is lonely? Is she running away?

We don’t get answers. Instead the play becomes cluttered with cliches about time travel. It’s feels too familiar, and has been done before and done much better. Maybe “Tech Support” doesn’t need a new time period but instead needs a reboot..