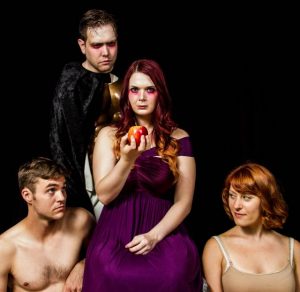 Last week a new show premiered from talent Joshua R. Pangborn, centered on asking some of the toughest questions man has ever posed. Was it really Eve's fault for the Destruction of Eden? Did Adam ever have a previous wife? What did God do to drive Lucifer from angel to devil? The First Woman attempted to answer these theological questions and while it provided entertainment in the form of great acting by Kat Murphy (The First Woman/Lilith) and Dane MK (Lucifer/The Devil), there was actually, very little explanation.

When the Creator (or God, voiced by Stuart Kiczek) decides that Adam (Nick Adamson), his first human creation, needs a companion, he makes a nameless woman out of dirt to serve as his partner. Enthralled, in love, and in denial, the nameless woman sets out to become Adam's equal -- whether he likes it or not. The results to this premise are a theater piece riddled with Biblical patriarchy, hypocritical love triangles, and a portrayal of God as a super passive aggressive being just waiting for mankind to come along and ruin his paradise.

As Adam becomes more and more submissive to the Will of God, the Nameless Woman becomes more and more jealous of her lover's infatuation with his Supreme Being. Meanwhile, the extremely emo Lucifer is becoming more and more enchanted with the rebellious First Woman, causing him to launch a war with God to win her affection. Guess who lost? When Lucifer is kicked out of Heaven for being a love-blind idiot and not taking his Prozac, he recruits the scorned, heart-broken First Woman to serve as his Queen in Hell. Having lost her man, and her way, The First Woman becomes Lilith and all hell literally breaks lose.

Meanwhile, God has created a new, more obedient woman for Adam, and he names her Eve (Sarah Grace Elizabeth). Upset and betrayed at the way both Adam and God favor her, Lilith conspires with the Devil to kill Eve, only to somewhat have a change of heart. Lucky for Abrahamic religions, Lilith's conscience is too late, and all of mankind ends up doomed all because that damn First Woman just couldn't listen.

I doubt this play will be a hit with everyone, but I could totally see the Anti-Book of Mormon crowd falling in love with it.