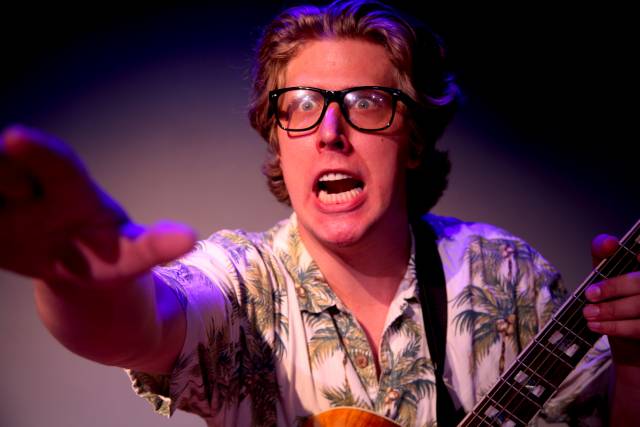 ​The fact that I found myself thinking about Celebrity Rehab after Gary Busey’s One-Man Hamlet as performed by David Carl ended with thunderous applause at 59E59 Theaters, where it is part of the series East to Edinburg featuring previews of shows headed to the prestigious festival in August, tells you a couple of things: a) the show isn’t the standard take on Shakespeare’s famous play, and b) the show ignites a fascination with the eccentric Busey. Best known for his performances in Lethal Weapon and Fear and Loathing in Las Vegas, the actor has appeared in very few films in the last decade. Still, the audience, latching on to every reference, enjoyed the show thoroughly and could be heard laughing out loud for the entire seventy-five minutes.
​
The production offers up pop songs, puppetry, multimedia fights and even a monologue from Independence Day. David Carl’s embodiment of the Gary Busey persona, full of narcissism and some really misinformed ideas about “method,” is surprisingly also rounded out with some endearing qualities. Carl keeps Busey human, allowing the audience to get led into Hamlet by someone as crazy as him. The attitude toward the great tragedy by William Shakespeare is irreverent, with jokes around the sudden introduction of a new character, a great impression of a crazy Ophelia and a hilarious re-imagination of the climax with puppets and Carl inhabiting all of the characters’ voices – as Gary Busey. As Hamlet draws his last breath and asks Horatio (described as Hamlet’s best and only friend) to share with the world Hamlet’s story after he is dead, Horatio says: “I will, but I’m not sure anyone is going to believe me.”

​Though humor is inserted into the well-known tragedy by questioning its less than probable narrative, Carl makes sure to deliver much of the chosen text from Hamlet in verse. His command over the language is obvious as he riffs on Shakespeare’s words, sometimes inserting contemporary language and at other times combining lines with the playwright’s other iconic works such as Romeo and Juliet and Macbeth. Much like a jazz musician, Carl is always able to return to the melody and in his hands, Shakespeare’s language sings. I’ll be there to see this man tackle any Shakespearean text.

In his efforts to make this particular text of Hamlet relevant by infusing it with all the madness of celebrity culture, Carl does sacrifice the emotional weight of the work. In the spirit of making the play accessible via humor, tragedy is sidelined, and I feel for the most part the audience is shielded from the darkness in the doomed price of Denmark as well as the actor (Gary Busey) playing him. Using a real, vulnerable moment could have undercut the mad-cap tone of the play, lending it more dimension.

​As the show makes it way to Edinburgh, though, all I can think about with glee is what the British, who cherish the Bard, will make of Gary Busey’s One-Man Hamlet as performed by David Carl.

East to Edinburgh continues through July 26 at 59E59 Theaters.