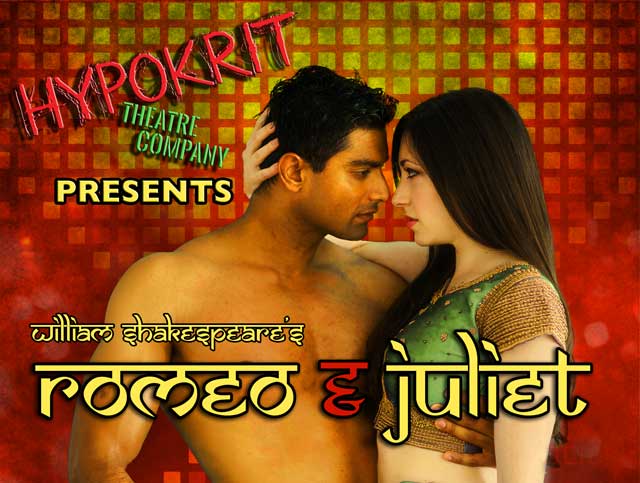 The first time I heard about Hypokrit Theater's "Bollywood" version of "Romeo & Juliet" I thought - wow, that's a fun idea. On several occasions when it's been mentioned in conversation, people have immediately latched into the concept and have shown interest as well. So I was excited to go see it during previews this week.

The show is performed on a small stage (at the Access Theater in lower Manhattan); to make use of the space, video projections of interior and exterior locations fill three white, flowing backdrops. The only other set piece is a box/table in the center of the space that's used in place of chairs, tables, a dais and more.  This abstract setting is a physical manifestation of the entire production. It's not a literal Bollywood show, but a merging of different elements from various cultures and time periods.  This also can be perceived as well in the costumes, that range from Lady Capulet's traditional Indian garb to Tybalt's "New York Police" t-shirt.  All of these visual cues help the audience to follow and enjoy a show written over 400 years ago, while bringing new life to it.

I found the cast to be engaging as well, even performers with smaller roles brought personality to their characters: DeAndre' Baker immediately grabs your attention as Lord Capulet. The tone and pace of his voice evokes a feeling of a bygone era, different but reminiscent of Sydney Greenstreet (Casablanca, Maltese Falcon). Aizzah Fatima plays the Nurse in a fun and charming way. You feel her concern and her playfulness. Deaon Griffon-Pressley is commanding and strong in the role of Tybalt, as he taunts Romeo and slays Mercutio.

Talking of Mercutio, in this production the role is played by a woman. This brings an extra layer of charm to the bond of the three friends (Romeo, Mercutio and Benvolio). Shubhra Prakash plays a sultry Mercutio who also "hangs with the boys". She's able to pull off something incredibly difficult to do, be both a tomboy and a beautiful woman at the same time. There's the slight hint that she might also desire Romeo, which brings an even deeper reasoning to defending him with her life. Along with the female Mercutio, Ashton Muniz plays Benvolio wonderfully. You can't help but immediately like his innocent friendship. He really brings life to the script and to the role.

For the leads, Morgan DeTogne's portrayal of Juliet is wonderful. In particular, the famous "O Romeo, Romeo! wherefore art thou Romeo? " monologue was one of the best I've ever heard. She played it true and fresh, every line with real meaning and not overdone.  Romeo is played by the incredibly sexy Gerrard Lobo as a headstrong young man easily swept up by his passions. Tall, dark and handsome, Mr. Lobo easily commands the stage with a presence that bespeaks "Leading Man."

Other roles are played with equal aplomb by the suited up Kabir Chopra as Paris,  Anand Ray as the Friar, performed with a hint of California Hippie that's fun to watch, and Elizabeth Wessa, who plays Lady Capulet with grace, charm and emotion.

Overall, the Direction of this production by Arpita Mukherjee is fresh and fun. She keeps the overall experience bright and energetic. You're never bored watching nor feel it's moving too slow. This is punctuated by the many Bollywood dance breaks inventively choreographed by Swarali Karulkar.

Ultimately, this is a small, blackbox theater show and must be viewed within these limitations – as a highly adventurous production attempting to do many things on a low budget. I'm sure as this new theater company matures and can see better funding, many of the terrific ideas seen in this first production will evolve. They have a big vision, which will be exciting to see in the future on larger stages that match their high-end aesthetic.