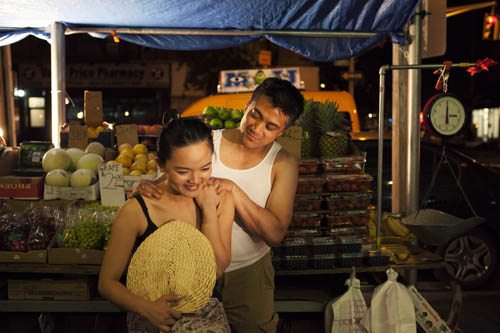 All the characters struggle with feelings of isolation and dissatisfaction, but deal with them very differently. The only people in the play who seem moderately happy are Jimmy (Ariel Estrada) and his wife Mei (Wei-Yi Lin), and even they have settled for running a fruit stand despite their degrees and intelligence. Throughout the play, we hear interspersed scenes of a wealthy, corporate astronaut heading to the moon, all whilst being interviewed remotely by an enthusiastic reporter. Eventually it becomes clear that this astronaut is Jimmy and Mei's son in the future, and these parallel storylines are the silver lining that balances the darker aspects of the play.

Angela also runs into her pop star crush, a closeted gay man named Justin Wilson (Seth Moore). Wilson is the least aware and most unintentionally hilarious of the cast, sincerely saying to Angel in his first appearance, "we pop stars also suffer in life." Wilson's body is covered in hickeys from his secret actor lover, who abandons him constantly, leading him to suck on his own arms to compensate. His days consist of staring at himself, fighting with the paparazzi, and desperately trying in vain to distract himself from his overwhelming insecurities.

The play ends much as it started, with the only true conclusion being offered through the astronaut interludes. It's a wonderful, laugh out loud play about how the people, things, and activities humans use to distract and block their feelings end up stunting and destroying them. "I Am a Moon," is playing at the Lynn Redgrave Theater (45 Bleecker Street) on August 15th at 9:30PM, and August 16th at 7PM. Don't miss it!